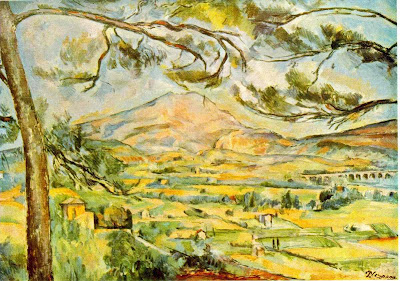 Impressionism, thanks to the seemingly endless string of blockbuster exhibitions circling the globe, often seems a tired, exhausted vein of art gold. Too-often relegated to the soft-focus, pretty pictures of calendars and gift shop items that rake in profits for museums, Impressionism and the Impressionists too often seem toothless. The disconnect between the bite of later Modern art movements and our present understanding of Impressionism leaves us wondering how those later schools rose from that first revolution. In Impressionism and the Modern Landscape: Productivity, Technology, and Urbanization from Manet to Van Gogh, James H. Rubin gives Impressionism teeth again and reconnects the rebels of Impressionism with their unruly descendents. Rubin recovers the lost roots of Impressionism, explaining why, for example, Paul Cézanne included a railway bridge off to the right of many paintings of Mont Sainte-Victoire (above, one example from 1885-1887). Opposing the common view of Impressionism and industrialism as diverging paths, Rubin sets both revolutions on parallel tracks and “places images of industrial waterways, trains, and factories… at the heart of Impressionism’s pioneering artistic enterprise of the late 1860s and the 1870s.” For too long, critics have condemned Impressionism as a primarily aesthetic revolution. “Grounding Impressionism in socioeconomic, technological, and political modernity,” Rubin counters, “makes it possible to reevaluate and strengthen the movement’s claim to avant-garde status on far more than aesthetic grounds.” Rubin allows the “effete” Impressionists to rejoin the modern, Industrial Revolutionary world and finally get their hands dirty again. 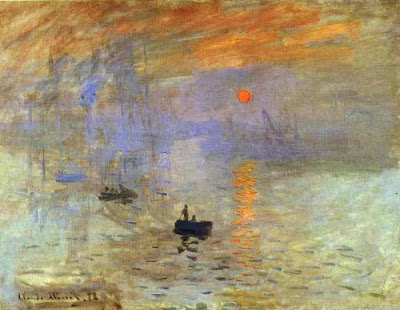 Rubin builds a highly convincing case by presenting piece after piece of evidence, going back to the very beginning of Impressionism with the work that gave the movement its name—Claude Monet’s Impression: Sunrise (above, from 1873). Monet’s painting shows the busy industrial harbor of Le Havre. Sunlight plays upon the water, but tugboats spew bluish smoke into the air as well. “In many of his paintings of industrial scenes Monet exercised aestheticizing options, such as blurring detail in fog,” Rubin responds to those who don’t “see” the industry in such Impressionist work. “But that does not necessarily mean he was suppressing such elements; rather, he seems to have been trying to capture what for him was their invigorating beauty.” “Believing profoundly in the value of productive labor,” Rubin later writes, the Impressionists try to make even the pollution beautiful. Even more interestingly, Rubin argues that the Impressionist style itself expresses that faith in labor. “Impressionism’s representation of a modern naturalistic landscape in an ostentatiously proactive style is inextricably bound up with the metatheme of productivity,” Rubin believes. Whereas photography captured the image faithfully, Impressionistic painting not only reproduced the image but added the reproduced the act of labor itself through labored brushstrokes. 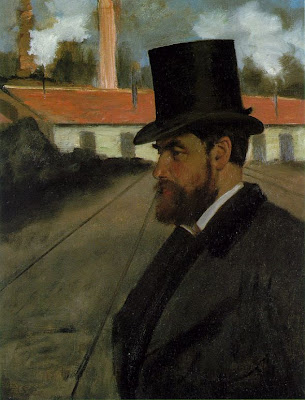 Rubens paints an Impressionist movement far more engaged with their time and place than ever done before. “Impressionism’s pleasing imagery is not value free, even though it implies disinterested freedom and enjoyment,” Ruben writes. For Rubin, the Impressionists present an “essentially urban, upper-middle-class, consumer-oriented vision of the world” chafing against the repressive establishment of 1870s France. The Impressionists complete culturally the renovations that Napoleon III and Georges Haussmann began when they modernized Paris into the city we still know today. Rather than fight progress, the Impressionists embraced it as the quintessential aspect of their age. The Impressionists praised figures such as industrialist Henri Rouart, who patronized the Impressionists and even tried his own hand at painting. Edgar Degas returned Rouart’s friendship and patronage with the affectionate portrait titled Henri Rouart in Front of His Factory (above, from 1875), which links industry with artistic sensibility beautifully. Rubin’s revival of the industrial roots of the Impressionists makes them seem much like the American Ashcan School of Robert Henri, and vice versa. Henri imbibed the spirit of Impressionism during his time there in the late 1880s and brought it back to America, where he adapted it to his increasingly industrialized and urbanized homeland. Thanks to Rubin’s argument, such (re)connections between the Impressionists and later movements not only become possible but, perhaps troublingly so, blur many of the lines of distinction between Impressionism and later developments. 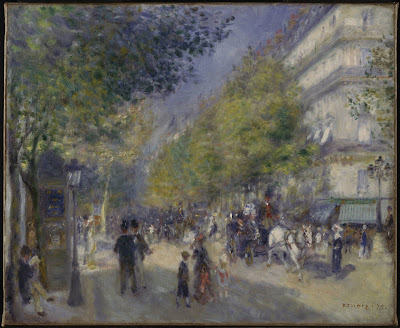 Ruben centers his argument on the Impressionists’ embrace of progress, so it’s understandable that he falters momentarily when dealing with conservative dissenters such as Pierre-Auguste Renoir, who bemoaned Haussmann’s renovations to Paris that introduced new buildings “cold and lined up like soldiers at a review.” In the catalogue to last year’s PMA exhibit Renoir Landscapes 1865-1883, Christopher Riopelle argued in an essay titled “Renoir in the City,” that Renoir willfully painted out many of Haussmann’s new additions in works such as The Grands Boulevards (above, from 1875), focusing instead on the parks and private gardens also introduced by Haussmann. “That such islands of privacy and peace” that were Paris’ many private gardens “were still to be found in the metropolis,” Riopelle writes, “was, for Renoir, a beguiling feature of city life.” For Riopelle, Renoir’s blurring is a “corrective” or “subtle, utopian statement,” whereas I assume Rubin chooses to read it as just another aestheticizing choice. The dichotomy in Renoir’s attitude and how it plays out in his painting, however, does not take away from Rubin’s larger argument but, instead, attests to just how passionately involved these artists were in everyday life in late nineteenth-century France—enough to march along with progress but never in mindless lockstep. 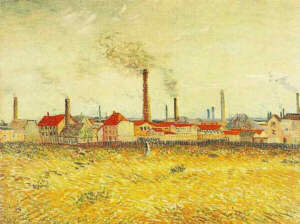 Rubin uses the work of the Post-Impressionists and Neo-Impressionists as a bridge between the Impressionists and twentieth-century Modern art. Georges Seurat and Paul Signac develop a more scientific style that mimics technological progress in an updated way when the Impressionists’ style no longer fit in with the changing industrial world. Even an old hand such as Camille Pissarro tried to keep up with the times and paint in the new fashion. The popular print media began to generate more images of industry and progress, inspiring artists such as Vincent Van Gogh to see industrialization in a whole new light. In Factories at Clichy (above, from 1887), Van Gogh responds not only to popular print culture but also the Post- and Neo-Impressionist works he saw in Paris, while simultaneously updating his own sympathy for the common man. “Van Gogh’s leftist sympathies for the working man led to his interest in urban and industrial imagery,” Rubin writes. Such faith in progress seems naïve today, but we must remember that the Impressionists worked before the Robber Barons and the grand failure of technology in the cataclysm of World War I. Living in our post-Enron world, the Impressionists’ belief in the power of industrial progress to do good seems not only naïve but dangerous. Perhaps that difference in mindset is the highest hurdle to overcome in accepting Rubin’s premise, which revitalizes the Impressionists as active participants in their time and not just timeless, disengaged makers of pretty pictures.

[Many thanks to the University of California Press for providing me with a review copy of James H. Rubin’s Impressionism and the Modern Landscape: Productivity, Technology, and Urbanization from Manet to Van Gogh.]

The impressionists' own words suffice for an understanding of their intently aesthetic motivations.

Someone spin it, quick!