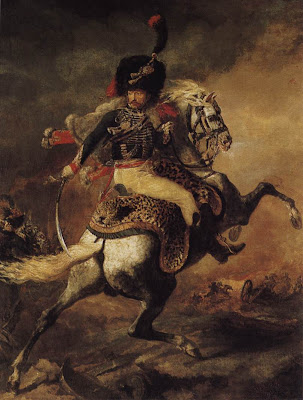 The Raft of the Medusa remains the most enduring image ever painted by Theodore Gericault, and rightfully so. Born September 26, 1791, Gericault capitalized on a special moment in French civilization when the sense of outrage was at its peak and people were ready to rally to a cause. Fresh from travels in Florence and Rome in 1817 and 1818, Gericault channeled his mania for Michelangelo into The Raft of the Medusa’s unique combination of Neoclassicism and nascent Romanticism. But The Raft wasn’t Gericault’s first public victory. An Officer of the Chasseurs Commanding a Charge (above, from 1812) won the medal for painting at the Paris Salon of 1812. Originally commissioned for the cavalry officer depicted, the winning painting showed Gericault channeling an earlier hero—Jacques-Louis David. Like David, Gericault jumped on the nationalist bandwagon and bought into the belief that Napoleon could change the world by ruling most of it. Like his charging chasseur, Gericault joined the fray in spirit if not in actual physical danger. 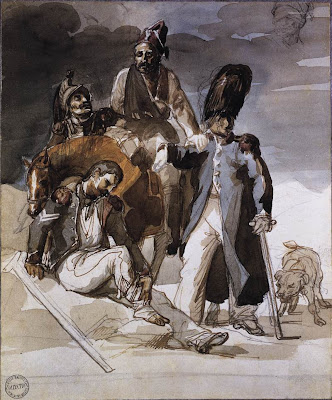 When the French invasion of Russia failed horrifically in 1812, the spirits of France and Gericault plummeted from earlier heights. They could see the beginning of the end. Gericault depicted that coming downfall in watercolors such as Wounded Soldiers Retrating from Russia (above, from 1814). In 1814, Napoleon found himself exiled to Elba. Even Napoleon’s return in 1815 concluded in the decisive loss at Waterloo. The turning of the tide for Napoleon’s fortunes mirrors the transition of Gericault from a Neoclassicist to a full-on Romanticist with an acute eye for the depths of human suffering, especially in wartime. Like his older contemporary Goya, Gericault recognized the true cost of war and faithfully reproduced that human drama in his most dramatic works. Gericault’s art literally returns to ground level in these images of retreat—a long way down from the pomp and circumstance of the charging chasseur on his high horse just two years before. 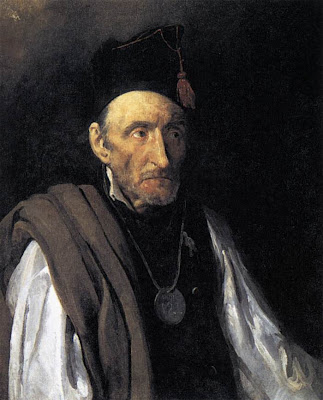 Gericault left France for England after Napoleon’s defeat, returning in 1819. Back in France, Gericault began to paint portraits of the patients of his friend, Étienne-Jean Georget, one of the earliest doctors of psychiatric medicine. Among these ten portraits, of which only five still exist, Gericault painted one poor soul who actually thought he was Napoleon in Man with Delusions of Military Command (above, from 1819-1822). In choosing this man with this particular ailment, Gericault comments on the very nature of imperialist thinking as a type of madness. Just how different is this mental patient from Napoleon himself?, Gericault asks. Unlike his previous paintings of military grandeur, Gericault shows the true shabbiness of lovers of war. Yet, he still paints this figure with sympathy, not only in acknowledgment of his illness but, perhaps, to acknowledge just how easily such delusions can infect not only individuals but whole nations at once.