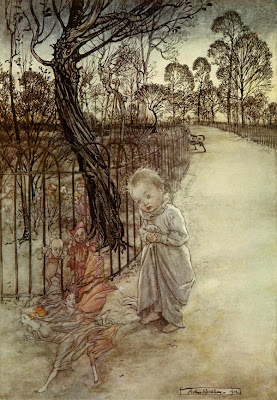 One of the great joys of parenthood is reading to your child. All those great illustrated books that you tucked back in the back of your mind as adulthood crowded the front suddenly emerge from your subconscious. So many contemporary illustrators owe a huge debt to their Victorian forebears, who essentially created the idea of illustrated children’s tales and, therefore, childhood itself. Arthur Rackham stands among the first-rank illustrators of that initial wave of creativity. Born September 18, 1867, Rackham first gained the public’s attention with his illustrations to Peter Pan in Kensington Gardens (originally part of The Little White Bird) by J.M. Barrie. (Rackham’s frontispiece appears above, from 1906.) Seven-day-old Peter Pan watches fairies flee from him as he stands among the garden’s trees, which twist with almost sinister intent. Director Guillermo Del Toro credits Rackham as one of the visual influences for Pan's Labyrinth, in which nature itself seems to conspire against the young child’s happiness in her fulfillment of her quest. Rackham’s images appear as fresh as they did over a century ago, with none of that Victorian mustiness. 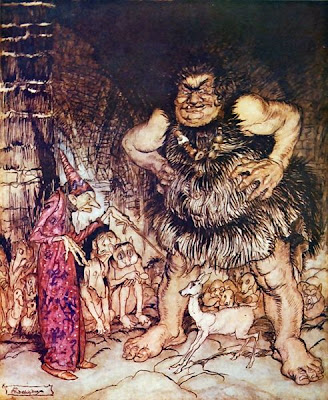 Rackham achieves that perfect balance of realism with magic that makes the magic seem actually believable. In one illustration for Flora Annie Steel’s 1918 edition of English Fairy Tales, Rackham shows “The giant Galligantua and the wicked old magician transform the duke's daughter into a white hind” (above, from 1918). The fidelity of the white hind makes the grotesque giant and wizened wizard almost believable. That balance is the key to all successful children’s illustration, at least for me, and Alex. One of Alex’s favorite illustrators, Sylvia Long, can put rabbits in pajamas or eyeglasses on bears and make even adults momentarily suspend their disbelief thanks to her superior draftsmanship. Rackham worked at a time when the line between book illustration and fine art wasn’t as clearly drawn as today and even exhibited some of his work in the Louvre in 1914. Only in the last twenty years, after a long dismissal of such art as kid’s stuff, have collectors and museums re-recognized the artistry of creators such as Rackham. 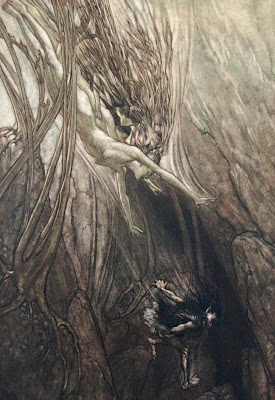 Rackham turned his eye to other subjects that were certainly not child’s play, but no less imaginative. In 1910, Rackham painted a series of illustrations for Richard Wagner's "The Ring" (one example above). The sense of flowing movement from upper left to the dark right corner is effortless. We feel as if we’re falling with the figures Rackham draws. The sharp diagonal line reveals Rackham’s interest in Japonisme, especially ukiyo-e, Japanese wood-block prints, which opened the eyes of Western artists to new compositional possibilities. Rackham also illustrated Shakespeare’s A Midsummer Night's Dream and tales by Edgar Allan Poe, among other “adult” works. If you want to lump Rackham in with any group of artists or movement, Art Nouveau would probably suit him best, but there’s an individuality to Rackham’s art that keeps it fresh and virtually as timeless as the wonder of childhood itself.

what a wonderful post. thanks for the links, and for continually expanding upon a subject you know i love.