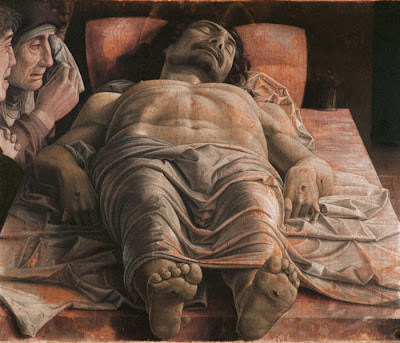 During the early Italian Renaissance, before the High Renaissance of Michelangelo, Raphael, and Leonardo da Vinci hit its heights, few artists took the new craze for perspective as deeply as Andrea Mantegna, with the best example being his staggeringly illusionistic The Lamentation over the Dead Christ (above, from 1490). Born sometime around 1431, Mantegna died on September 13, 1506, leaving behind a rich legacy of painting marrying the newfangled science of perspective with a devotion to the art of the ancient Greeks and Romans. In The Lamentation over the Dead Christ, Mantegna meticulously drapes the cloth over the lower half of Christ’s body, copying the pattern of folds he studied closely in Roman sculpture. The realistic faces of the mourners on the left, in stark contrast to the generic faces of other religious works of the time, attest to Mantegna’s pursuit of realism. Even more realistic is the noticeable bulge of Christ’s genitalia beneath the shroud, part of the Renaissance’s humanist program of emphasizing the sexuality (and, therefore, human nature) of Christ that Leo Steinberg analyzed so thoroughly in his The Sexuality of Christ in Renaissance Art and in Modern Oblivion. In Mantegna’s work there is both a visual and philosophical depth that serves as a wonderful illustration of the Renaissance as a whole. 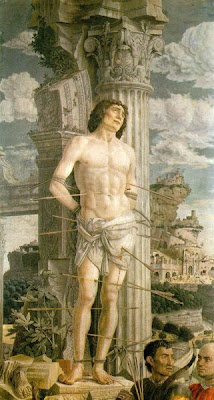 As a young man, Mantegna studied the Roman ruins all around him. Archaeology was just finding a place in the arts and sciences at the time, fueled by the rediscovery of many ancient Roman and Greek sculptures. When Mantegna painted St. Sebastian (above, the version from the Louvre, from 1456-1459), he included not only a beautifully rendered Roman pillar to which the saint is bound but also an intricate set of realistic ancient ruins in the background. Mantegna painted several versions of St. Sebastian, but all share in this linking to the past. When people see the Renaissance as a rebirth of ancient ideals, they look to Mantegna’s work for some of the earliest examples. As with the sexed-up Jesus of The Lamentation, Mantegna portrays St. Sebastian as a remarkable physical specimen, an “athlete for God” enduring pain in the name of faith. Mantegna updates the perfect bodies of ancient Greek and Roman sculpture for the Christian world. 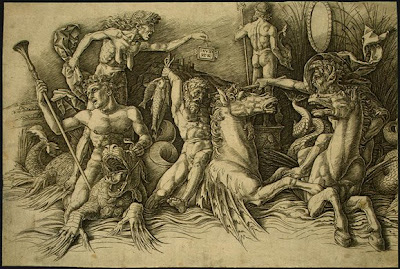 In addition to being a great painter, Mantegna excelled at engraving, as seen in works such as The Battle of the Sea Gods (above, from 1485). Such prints traveled beyond the borders of Italy and helped spread the gospel of the Renaissance to other European countries. Albrecht Dürer first encountered the Italian Renaissance through Mantegna’s prints and traveled twice to Italy to see more, taking away many ideas he would later make his own. The figures in The Battle of the Sea Gods seem like statues squaring off against one another in another example of Mantegna’s debt to the past. The dynamic movement of such works may have influenced later artists such as Michelangelo to create similarly crowded compositions. The foreshortening of the sea monsters may not be as show-stopping as the foreshortening in The Lamentation, but this etching confirms Mantegna’s ability as a draftsman and visionary artist just as well. Mantegna rarely breaks into the top tier of Renaissance names, thanks, perhaps, to Giorgio Vasari’s lukewarm assessment’s influence through the ages, but he remains one of the pillars upon which the Renaissance rested.

Another point unmentioned is Mantegna's combative personality. Apparently he wasn't the easiest guy to deal with, the Gonzaga's notwithstanding. His status as a court and personal painter to one of the leading Italian families may have went to his head. People reluctantly acknowledge talent when it is coupled with an ego that is comparable.
His Madonna of Victory is a personal favorite because of its vegetation overload. Note the modeling of the hands on the Christ figure and Mary.