Faces in the Crowd 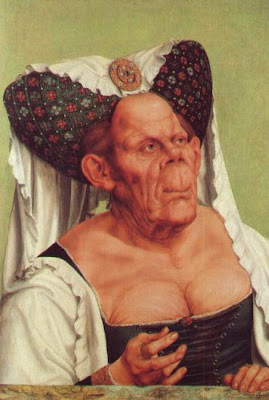 If there’s an uglier portrait than Quentin Matsys’ A Grotesque Old Woman (above, from 1525-1530) out there, I don’t think I want to see it. One of the founding members of the so-called Antwerp school, Matsys kept alive the style and technique of earlier Flemish artists such as Dirk Bouts, Hans Memling, Roger van der Weyden, and Jan van Eyck and links that tradition to the great artist of the generation after his—Peter Paul Rubens. Matsys died on September 16, 1530 (and was born around 1466), leaving a legacy of stylish, if often grotesque art. Like Rembrandt a century later later, Matsys found endless material in the faces of the Antwerp crowds, both the beautiful and the ugly. So many of those faces found places within not only his secular works but also in his religious works, which showed the great depth of his religious feeling, albeit a faith marked by a profound understanding of the rough and tumble world.

Matsys’ St. John Altarpiece (above, from 1507-1508) seems less a religious work than a misplaced painting by Hieronymus Bosch, whom Matsys may have known and admired. On the left, Salome offers the decapitated head of John the Baptist to Herod. On the right, Saint John cooks in a cauldron of boiling oil. In the center, Joseph of Arimathea asks the Virgin Mary if he may bury the broken body of Christ in his tomb. All three panels shows horribly grotesque scenes from the New Testament full of death, when all hope seems to reach its nadir. Yet, within each scene there is a glimmer of hope for those who believe—John’s death followed by Christ’s mission, Saint John’s martyrdom by the promise of heaven, and Christ’s entombment by the Resurrection. Despite the dark scenes depicted, Matsys keeps hope alive by painting each of these scenes with bursting color, introducing an element of life in this world of death. The faces in the different scenes offer a virtual catalogue of humanity, from the innocent to the guilty, from the selfish to the selfless. 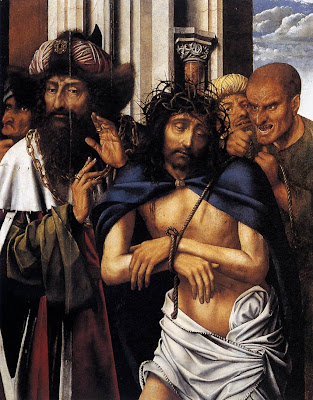 In Ecce Homo (above, from 1526), Matsys surrounds the mocked Christ with fascinating characters. Hook-nosed Pilate turns away from Christ in the background, visually washing his hands of the situation. A well-dressed man in a turban shuns Christ, too, raising his hands as if the very touch of the victim would soil him. Only the man on the right keeps his eyes on Christ, and they’re full of insane hatred and lust for blood. Matsys captures so many mental states perfectly in these faces in the crowd that you almost lose sight of the stars of the show. Even Christ seems psychologically accurate, turning his eyes to the ground, despairing momentarily over the fate he sees before him. Sir Joshua Reynolds praised one of Matsys’s paintings by saying, "There are heads in this picture not exceeded by Raphael, and indeed not unlike his [early] manner of painting portraits, hard and minutely finished." Sadly, Matsys’ name has faded, usually outshone by the brighter lights that came before and after him, but a close inspection of the faces in Matsys’ crowds will make you realize that this artist should never be lost in any crowd.