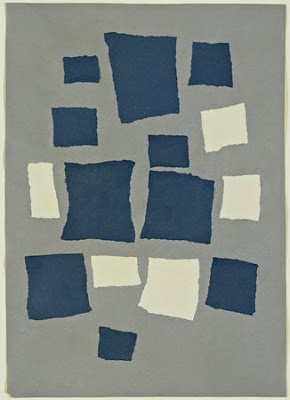 "We had a dim premonition that power-mad gangsters would one day use art itself as a way of deadening men’s minds," Jean Arp once said. Born September 16, 1887, the French Arp (who called himself Hans when speaking German) joined forces with like-minded artists during the dark days of World War I and helped form the Dada and Surrealist movements, which wanted to take the twisted reason of “power-mad gangsters” embroiling the world in armed conflict and replace it with the playful, unconscious world of chance. Arp’s Untitled (Collage with Squares Arranged according to the Laws of Chance) (above, from 1916-1917) belongs to a series of collages he did by allegedly dropping torn bits of paper onto a larger sheet and pasting them wherever chance led them. By placing his imagination completely out of the picture, Arp sought to reproduce the random effects of nature. This collage seems to composed to be done purely by chance, but the spirit of Arp’s enterprise—literally a dream to save the world—still holds true. 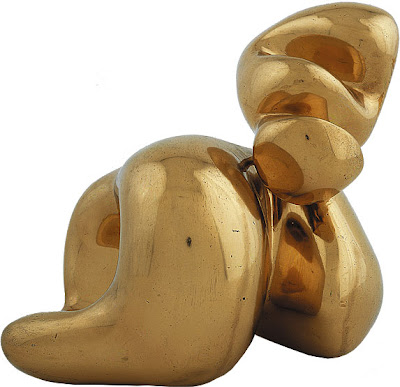 Arp loved to mimic nature in his abstractions, creating biomorphic figures such as Head and Shell (above, from 1933). Arp’s polished brass Head and Shell suggests natural forms without accurately reproducing them. Arp claimed that he only titled such works after deciding there was nothing left to change after allowing his unconscious mind to play with the forms. Like Joan Miró, Henry Moore, and Barbara Hepworth, among many others, copied Arp’s flirtation with natural forms in their paintings and sculptures. "Art is a fruit that grows in man, like a fruit on a plant, or a child in its mother's womb," Arp later said, again echoing the Surrealist/Dada line that art flowed organically from the unconscious rather than the conscious mind, which always looked to shape (and often misshape) the world. There’s always a great sense of movement in Arp’s sculptures, which often seem to be growing before your eyes, as if they had just emerged from a shell and were looking for their mother. 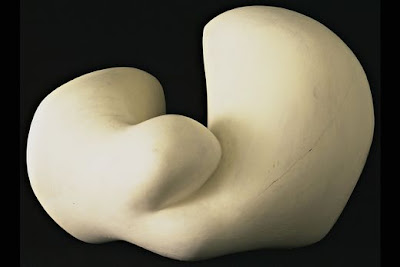 Arp fled France as the Nazis advanced and sat out World War II in Zurich, Switzerland. Years later, Arp looked back on those sad days and lamented the fate of humanity. "Soon silence will have passed into legend,” Arp believed. “Man has turned his back on silence. Day after day he invents machines and devices that increase noise and distract humanity from the essence of life, contemplation, meditation." With works such as Human Concretion (above, from 1935), Arp hoped to cement the importance of thought and right reasoning to the survival of the human race. While Arp’s earliest works represented an escape from thought, or at least the twisted thought of those hungering for power, his later works emphasize the need to find a quiet place within and find the meaning of life for ourselves, away from the cacophony of media and technological progress. What would Arp make of today’s world of gadgets, all of which fill the world with noise and drown out our inner voices? He’d probably put a finger to his lips, point to one of his sculptures, and whisper quietly, “Look, and learn.”

Hello - beautifully written, lately I have returned to college and am fortunate to have some incredible teachers. In a 3-D sculture class we are exploring several mediums and aquainting ourselves with interesting concepts. My work has been compared to Arp - what an honor...
the simple biomorphic mass, with no parallel lines, no symmetry, and no central axis- not an easy problem to solve. Thank you for your blog - Amy