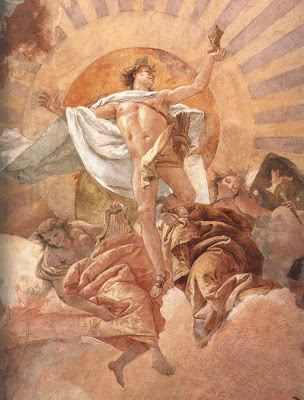 I find grand ceiling frescoes to be, frankly, a big pain in the neck. As much as I appreciate the intended effect of majesty and scale, the distance between me and the work as well as my frustration at not being able to take the work in as a whole interfere with my enjoyment of the work. Giovanni Battista Tiepolo painted some of the greatest and biggest frescoes of the eighteenth century—the last of the “grand manner” artists before Neoclassicism showed Rococo the door. Born August 30, 1727, Tiepolo painted the largest ceiling fresco in the world, The Allegory of the Planets and Continents, for Prince Bishop Karl Philipp von Greiffenklau’s New Residenz palace from 1750 through 1753. (A detail from the mural showing Apollo, the star of the show, descending from on high appears above. A picture of the full fresco appears below.) With the assistance of his two sons, Tiepolo painted an allegory of Apollo, the god of light, making his daily rounds of the earth, illuminating the globe continent by continent. Consistent with the geography of the time, Tiepolo depicts only four continents—Europe, Asia, Africa, and America. Despite the grand scale of the fresco, the insular world that it represented—dominated by wealthy royalty—was quickly getting bigger and tougher to control. 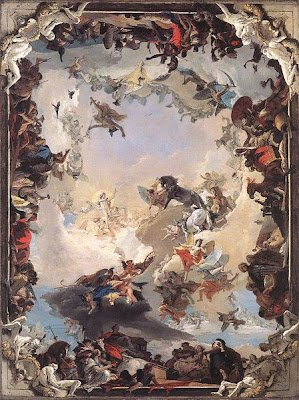 I’m not sure who got this photo of the fresco, or how. Photos taken from the ground show only that you really can’t see anything from the ground. The Allegory of the Planets and Continents stands above a grand staircase that is the architectural showpiece of the palace. As you climb the steps, different pieces of the fresco become easier to view, but you never get to see the whole thing. Just like Apollo, you tour the continents one by one. The intent is to make you conscious of your limitations before the power of nobility, who literally control your access to the world—their world. The center of the fresco is almost exclusively blue sky because it’s too far away for anyone to see anything painted there. Always conscious of how his art worked with the environment, Tiepolo wasted only this wasted space while filling up the rest with lavish detail to entertain the powerful repeatedly viewing it and to impress the powerless with a vision of riches beyond their reach. 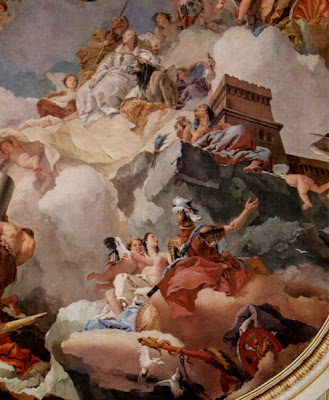 In 1761, Charles III of Spain commissioned Tiepolo to paint frescoes for the Royal Palace in Madrid. In the Queen’s Antechamber, Tiepolo and his assistants painted Apotheosis of the Spanish Monarchy (a detail from which appears above, from 1762-1766). The Queen appears surrounded by several of the gods of Greek mythology, including, once again, Apollo. By the 1760s, Tiepolo was one of the last artists working on such a gigantic scale. Jealous, Anton Raphael Mengs conspired against Tiepolo to keep him from gaining any more commissions, hoping that the grand fresco would soon die with him, which, for all intents and purposes, it did in 1770. Tiepolo expired just as millennia of monarchy approached its expiration date in the upheavals of the late eighteenth and early nineteenth centuries. Today, thanks to innovations in photography and reproductions in books, we can finally see such grand frescoes in detail if not as a satisfyingly comprehensive whole, thus bringing the age of kings and queens down to a democratized rightful size. Tiepolo still rarely fails to impress by sheer scale and creativity, but it remains hard to embrace his art—so huge and high above us, reigning godlike.