The Eyes of the Beholder 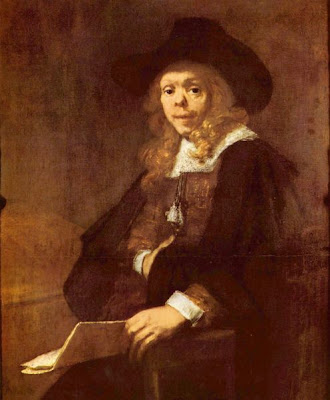 When Annie and I visited the Met last year to catch The Age of Rembrandt exhibition, one of the paintings that stuck in my mind the longest was Rembrandt’s portrait of Gerard de Lairesse (above, from 1665). Born September 11, 1641, de Lairesse contracted congenital syphilis at birth. By the age of 24, when Rembrandt painted this portrait, de Lairesse already showed all the signs of syphilis, particularly his horribly ravaged nose. (A great medical article on de Lairesse’s condition appears here.) Despite his deformity, de Lairesse charmed the ladies and society at large with his wit and talent as a painter. Rembrandt paints the younger artist with unflinching realism, but the soulful look in de Lairesse’s eyes put there by Rembrandt gives him a steadfast dignity in the face of his illness. Ironically, de Lairesse disliked Rembrandt’s portrait style in general, calling it “liquid mud,” choosing instead to model his own painting style after smoother, more classically beautiful artists such as Raphael and Nicolas Poussin. Beneath that rough exterior beat the heart of a true artist of the beautiful. 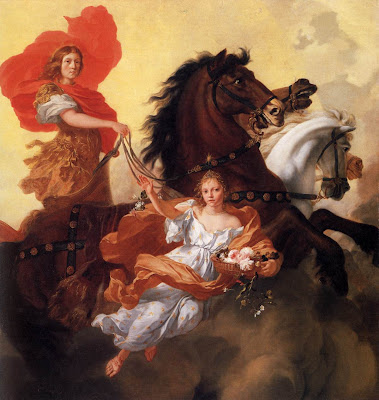 de Lairesse found his greatest success in catering to the taste of the up-and-coming Dutch merchant class looking to spend their newfound riches on decorations for their lavish homes. de Lairesse painted Apollo and Aurora (above, from 1671) for one of those merchant’s homes. Such works earned him the nickname of “The Dutch Raphael” from contemporaries. Other contemporaries grew jealous of de Lairesse’s and actually ran him out of town rather than compete for commissions. The colors in Apollo and Aurora are stunningly vibrant—the complete opposite of the dark palette of Rembrandt and other painters of the Dutch Golden Age. It was as if de Lairesse couldn’t tolerate more darkness in his life and overcompensated with more and more color. 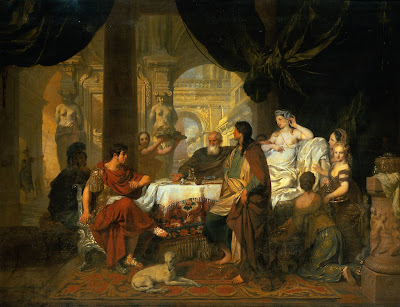 Sadly, de Lairesse lost his vision in his late 40s, most likely from complications of his illness, and his painting career was over. He turned his hand to art criticism and theory after that, putting into words the belief system behind his paintings. Although de Lairesse remained en vogue during the eighteenth century, by the nineteenth century his theories and his works seemed overly precious and dated. Yet works by de Lairesse such as Cleopatra's Banquet (above, from 1680) show how he once was known as “The Dutch Poussin.” In the grand tradition of history painting, de Lairesse lays on the details and finery thick. Choosing the moment when Cleopatra dissolves a pearl into vinegar and drinks it to win a bet with Mark Antony, de Lairesse characteristically selects the moment when the queen literally takes beauty (the pearl) into her physical body. Throughout his life, de Lairesse longed to imbibe beauty itself and, at least metaphorically if not physically, transform himself. Looking into the mirror each day at his misshapen exterior, de Lairesse beheld the beauty within himself searching for release.