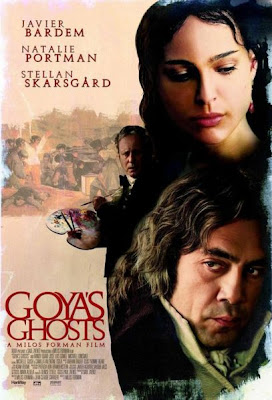 Sorry for being behind the cinematic curve, but I just got a chance to see Goya’s Ghosts. (Most of my movie watching is done via Netflix and while running on the treadmill.) Goya’s Ghosts features Stellan Skarsgård as Francisco Goya in 1792 Spain, when the French Revolution roared literally next door and the nervous Catholic Church gets “old school” with the Spanish Inquisition and brings back “The Question” and other forms of hideous torture. Director Miloš Forman presents a visually arresting film, similar to his grand period piece Amadeus, but the story itself seems thin and wan next to the robust historical events surrounding the characters. Goya’s story and art evoke such passions that the dispassionate presentation of Goya’s Ghosts, a fictional episode drawing on real-life fragments, disappoints even more than it should. Goya’s Ghosts isn’t the worst film ever made about an artist, but it may be the most anticlimatic. 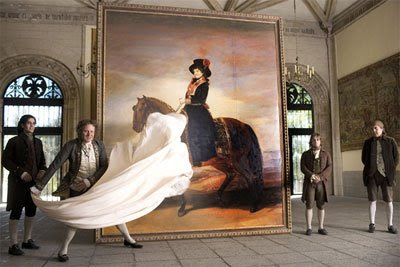 Forman pays attention at least to the particulars of Goya’s life as a practicing artist of the time. A sequence showing Goya etching on a plate, followed by the mechanical steps of realizing a print from that same plate, give a wonderfully accurate glimpse of the working practices of the time. These scenes show Goya with such consummate competence that they seem disjointed from the rest of the film, in which Goya’s ineffectual efforts in pleading before royalty and clergy make him seem very, very small. When Goya unveils his portrait of the queen, Maria Luisa of Parma (above), she and King Carlos IV (played by Randy Quaid, whose only previous king experience was Kingpin) rise and walk off in a huff, unamused by the too-realistic equestrian portrait of the no-longer-young, perhaps-never-beautiful Maria Luisa. I’ve always loved Goya for the whole “secret identity” game he played for years—obsequiously smiling for the paying influential customers while simultaneously drawing and painting images undermining their authority. Again, we see too much of the weakling Goya and not enough of the rebel to get a sense of the delicate balance the artist maintained not only to keep painting but also to keep alive. 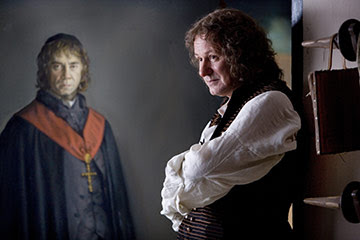 Whenever Javier Bardem steps onto the screen in the role of Lorenzo, the nefarious priest heading the newer, merciless Spanish Inquisition, all eyes lock on him. Rather than the banality of evil, Goya’s Ghosts presents the banality of good, with Bardem’s Lorenzo glamorously and sinisterly dominating every scene. Bardem plays this role one year before his award-winning turn in No Country for Old Men, but Lorenzo is just as captivating as that film’s amoral hitman. I remember seeing an interview with George Clooney in which he recalled a gathering of top-name actors talking shop. The one thing all the actors could agree on was that they all wanted to be Javier Bardem. When George Clooney wants to be you, you know you’re on the right track. Goya paints Lorenzo’s portrait (above) and the two form a strange friendship. Lorenzo warns Goya that his political drawings have earned him powerful enemies, never fully disclosing whether he is one of them. When Lorenzo spots a portrait of Ines (played by Natalie Portman) in Goya’s studio, her fate, as well as the fate of Lorenzo and Goya, is sealed. 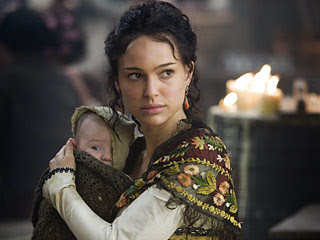 At the heart of Goya’s Ghosts is the question of obsession. Goya paints Ines (above) over and over in different contexts, imposing her beauty onto come-hither-stare portraits one moment and onto the faces of angels the next. Lorenzo’s fascination with Ines leads to her imprisonment under the Spanish Inquisition. Goya pleads for mercy with the king and Lorenzo on behalf of Ines’ family and to serve his own artistic purposes but ultimately fails. When the film skips forward 15 years, dropping in medias res into the Napoleonic Wars tramping through Spain, Goya still mourns for his lost muse. I saw a parallel between Lorenzo and Goya in their consumption of Ines the person. Lorenzo’s lust shatters Ines’ life more maliciously, but Goya’s sucking dry of Ines’ youthful beauty as raw material for his art seems just as aggressive, if only passive aggressive. Goya’s guilt drives him to atone for his actions, something Lorenzo never comes close to, but you still get the feeling that Goya always wants to save Ines’ surface rather than her soul, always thinking of the next painting rather than the person before him. It’s worthwhile to remember that Forman fabricates the entire episode of Lorenzo and Ines or else you may find yourself hating Goya, as I did for a moment at the film’s end. For all the stunning visual details and Bardem’s performance, Goya’s Ghosts is an enjoyable film, but as a glimpse into the mind and heart of the artist and man Goya, it leaves us questioning the humanity of perhaps the fiercest artistic champion of humanity ever.