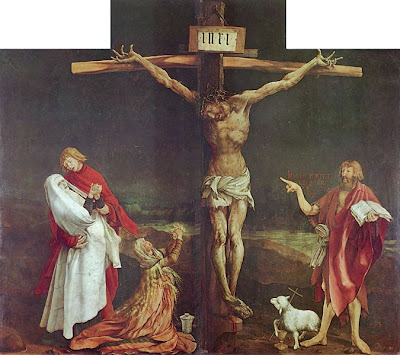 Is there any major artist so identified with a single amazing work and that work alone as the artist we know as Matthias Grunewald is with the Isenheim Altarpiece? The only biographical fact that we know for sure about the artist is that his name was most definitely not Matthias Grunewald, which was the error of the artist’s first biographer Joachim von Sandrart in the seventeenth century. Grunewald, whose name was most likely some combination of "Mathis," "Gothart," and/or "Neithardt," died on August 31, 1528. Born sometime around 1470, Grunewald’s life paralleled that of Albrecht Dürer but his art diverged from Durer’s in rejecting the Italian Renaissance’s lofty humanism and embracing an earthy, dark view of life, as seen in the unforgettable Crucifixion from the Isenheim Altarpiece (above, from 1515). Grunewald painted this Crucifixion for the hospital chapel of St. Anthony’s Monastary. The patients, most of whom suffered from horrific skin conditions, could raise their eyes and see Christ similarly afflicted in addition to his customary suffering. Saint Sebastian, the patron saint of the plague, also appears on the altarpiece, whose many panels testify to the greatness of Grunewald as a painter. Although he enjoyed fame during his lifetime, Grunewald slipped into obscurity after his death, with many of his paintings amazingly being attributed to Durer until nineteenth century scholars finally attempted to unearth Grunewald’s memory but were much too late.

Other works, often shakily attributed to Grunewald, share dark religious themes, usually surrounding the Crucifixion, such as another altarpiece detail known as The Lamentation of Christ (above, from 1523). In this long, rectangular panel, Grunewald crams the body of the dead savior into the space. This figure shares the same gruesome, grey skin of the Isenheim Altarpiece Christ. It’s hard to understand today how any work by Grunewald could ever have been attributed to Durer. Durer delves into the dark side from time to time, but his amazingly detailed draftsmanship overpowers any kind of gothic element. Grunewald, by contrast, marries gothic content with gothic technique beautifully. Hieronymus Bosch, a slightly earlier contemporary of Grunewald, may have Grunewald beaten in terms of sheer inventiveness, but Grunewald more than holds his own with Bosch when you talk about making the nightmarish seem tangibly real. Working within the constrictions of Christian iconography, Grunewald still manages to inventively depict the darkest corners of the human psyche as well as the most agonizing physical ailments that generation could endure. 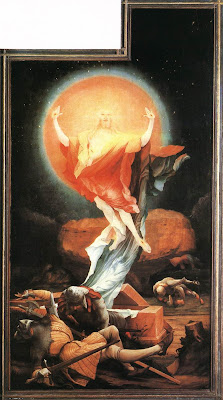 Grunewald, however, wasn’t all doom and gloom. His Resurrection scene from the Isenheim Altarpiece (above, from 1515) shows the risen Christ gleaming with the light of life itself. I’ve always wondered if William Blake knew anything of Grunewald, whose reputation was on the rise in the nineteenth century. This Resurrection scene, so colorful and so kinetically alive in the twisted figure of the risen Jesus and his drapery, reminds me of so many of Blake’s paintings not only of Christian themes but also of his own mythological creations. Grunewald continues to capture the imagination of art lovers even today with his strange difference. Paul Hindemith’s 1934 Mathis der Maler Symphony, inspired by Grunewald’s art, remains one of my favorite modern classical pieces connected to art history. (Hindemith also wrote an opera based on Grunewald, but I’m not familiar with it.) Listening to Hindemith’s musical interpretation of Grunewald’s art, it seems as if Grunewald fits in as well with the modern world than his own. Such is the universality and timelessness of Grunewald’s art, struggling against oppression and giving a visual “voice” to that struggle. If Grunewald were alive today, he’d be painting scenes of Abu Ghraib or Darfur, as unconcerned about being “out of step” as he was centuries ago.