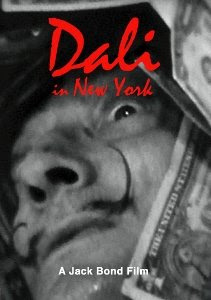 As the Dali: Painting and Film exhibition currently at the MoMA clearly proves, Salvador Dali loved the big screen, especially when he or his works appeared on it. Capitalizing on the renewed interest in Dali’s interest, Microcinema recently re-released Jack Bond’s 1966 documentary on the artist, Dali in New York (above). Bond shows Dali years after his pre-World War II Surrealist success, still riding high on that reputation and not yet descending into the slow dissolution of illness and exploitation by parasitic hangers on that marked his final years. Erasing the sad memory of the lion in winter, Bond’s film shows Dali’s Autumn in New York, when the art world and the world itself seemed to encroach upon Dali’s bizzarro plane of existence to the point that it could finally embrace him as mainstream. For Dali, however, that embrace he long wished for sometimes seemed like strangulation. Bond shows Dali straining against the bonds of acceptance and endlessly elbowing for more room to perform his trickery while simultaneously calling for the crowds to edge in closer. 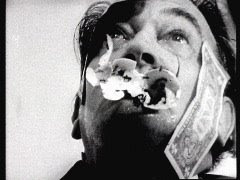 Dali stages scene after scene for Bond’s camera. For Bond, Dali must have been both an ideal and difficult subject—always providing material yet never turning off the spigot. Signing books in a bookstore, Dali signs each succeeding book with greater and greater flourishes. Dali’s entourage (which includes a court philosopher, a court poet, a military advisor, and a young man claiming to be the reincarnation of Dali’s dead brother) all mug for the camera and echo their master’s eccentricities. Sadly, the effect is to diminish rather than amplify Dali’s outrageousness by their feeble copying. Later, Bond follows Dali to a photo shoot in which Dali lays in a coffin-like box covered in paper money and coins. One of his followers places an egg on Dali’s mouth. When the egg breaks, ants stream forth (above). The photographer keeps shooting as Dali rises from the box, maintaining his game face despite the insects. The egg and the ants allude to many familiar paintings of Dali’s containing those elements as part of the dreamlike surrealist landscape. In real life, Dali’s willingness to play his part to the hilt demonstrates his commitment to his art but also resembles a desperate plea for attention that goes beyond his attention-grabbing pranks of the past. 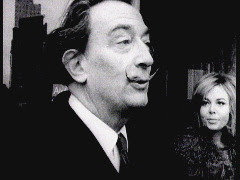 Bond balances the heavy dose of Dali with the supportive, often explanatory presence of writer Jane Arden (above, with Dali). Arden puts into (as much as possible) comprehensible language Dali’s work and his personal style. She plays the straight man to Dali’s comic mania. Arden leads Dali with questions into some standard golden Dali sound bites. Asked about his wife, Gala, Dali responds, “But for Gala I would be lying in a gutter somewhere covered with lice.” (Ants in a coffin, however, is perfectly acceptable.) When makeup people try to prepare Dali for an outside shot and he resists, Arden tries to place the artist only to have him rail diva-like, “You are my slave! I am not your slave. Everybody is my slave!” before tramping off in a huff. Bond’s documentary captures Dali in the round, from every direction rather than from the single point of view of blind fandom. The film begins with a New York City cabbie complaining that Dali doesn’t talk to ordinary people like him and even has the doorman pay for a ride. Bond shows an interview in which Dali is asked about his Fascism “problem” and continued support of Francisco Franco. “Do you still believe that poor people are happier with no freedom?” Dali is asked, to which he agrees. “The last relationship between two humans is Freud and Dali,” Dali says elsewhere, insinuating that only such elites can truly talk to one another. Such moments make up only a small part of Dali in New York, but they add a depth and nuance that a simple valentine never could. 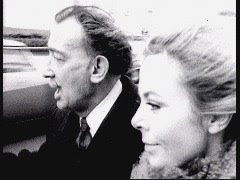 Bond intersperses Dali the man with images of his works. Sometimes Bond even animates Dali’s paintings in an almost Monty Python-esque fashion, highlighting their unreality even more. When Gala stands beside a portrait of herself at an exhibition, you wish you could hear her speak but Bond wisely keeps her in the role of silent muse and partner. At that same exhibition, Bond eves drops on Dali’s critics and raises the specter of Dali’s repetition and self-parody at that point of his career. Bond, however, allows Dali to have the last word, not that he really had any choice. As a group of musicians frantically play Spanish flamenco music, Dali wildly marks a canvas and steps away to judge his work. He repeats these steps over and over, seemingly at random, but in the end a man on horseback emerges magically from the chaos, perhaps even Don Quixote. At the end of Dali in New York, we see Dali as a Quixotic figure tilting at the windmills of changing cultural taste and reminding everyone that he was Warhol, the darling of the 1960s American art scene, long before Warhol was Warhol. Despite what looks like chaos, in the drawing, the film, and Dali’s life, that final scene assures us that Dali knew what he was doing all along. Dali in New York reminds us that even after the peak of his powers, Dali could still put on a great show.

[Many thanks to Microcinema for providing me with a copy of Dali in New York and for the images from the film.]