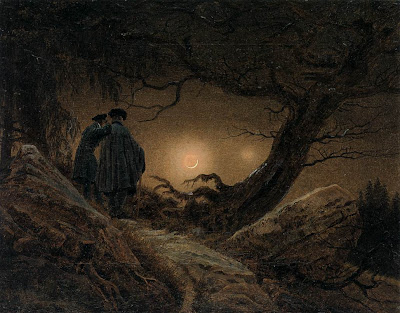 I recently watched the documentary On the Ecstasy of Ski-Flying: Werner Herzog in Conversation with Karen Beckman and found myself amazed that the enigmatic film director Werner Herzog admired the works of the great German Romantic painter Caspar David Friedrich. Born September 5, 1774, Friedrich seems the quintessential Romantic painter with such haunting works as Two Men Contemplating the Moon (above, from 1819). Yet, Herzog, the anti-Romantic, finds a spirituality in Friedrich’s work that transcends Romanticism, suggesting perhaps that Romantic associations were imposed on Friedrich’s art from without rather than from within the artist’s soul. Herzog, the director of films such as Aguirre, the Wrath of God (1972), Fitzcarraldo (1982), and Grizzly Man (2005), sees the figures in his films, like the figures in Friedrich’s paintings, existing within nature but not claiming any place of pride. Instead, people recognize their insignificance before the greater wonders of nature; when they don’t, bad things happen in Herzog’s films. Romanticism typically elevates the role of humanity in nature, but you usually don’t find that happening in Friedrich. 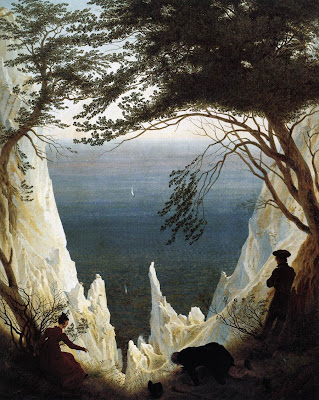 Even while on his honeymoon in 1818, Friedrich couldn’t permit himself a moment of feeling larger than life itself. In Chalk Cliffs on Rügen (above, from 1818), Friedrich paints himself, his wife Caroline, and his brother Christian perilously walking near the cliffs’ edge and looking upon the water far below. The chasm almost invites you to plummet into its depths and embrace oblivion. Friedrich paints himself in the middle, crawling after his hat and coming the closest to falling over the edge. After marrying a much younger woman late while in his mid-40s, Friedrich softened up a little, painting several domestic scenes depicting his wife, but always including somewhere this sense of the insignificance of the individual. The beauty of Friedrich’s works lies in his ability to capture simultaneously nature’s power and humanity’s powerlessness without overstating or understating either. Just as he keeps his balance at the cliff’s edge, Friedrich never loses this balance between the natural macrocosm and the individual’s microcosm. 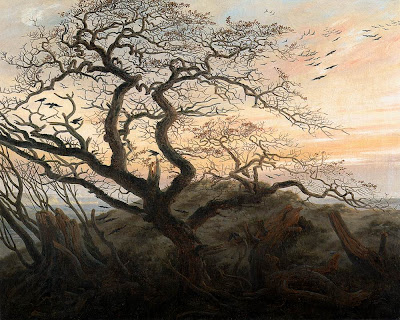 I love Friedrich’s work so absolutely that I find it hard to believe he ever fell into obscurity, which he did for much of the latter part of the nineteenth century. A stroke in 1835 effectively ended his painting career. The art world barely noted his death five years. Only after World War I, when the German Expressionists read the works of Søren Kierkegaard and Friedrich Nietzsche and searched for an Expressionist/Existentialist predecessor in art did they rediscover the works of Friedrich. Paintings such as The Tree of Crows (above, from 1822), in which the gnarled limbs of the tree seem to rise in anguish, spoke to a new generation facing feelings of insignificance not only in the face of nature itself but also thanks to the technology civilization had unleashed upon itself. The Tree of Crows rises from a group of trees ravaged by storms. Crows, classic symbols of death, fly off into the distance. Yet, despite all these trappings of death, the tree lives on—a small part of “woods decaying, never to be decay'd,” as Wordsworth wrote in The Prelude, another quintessentially Romantic book that recognizes the rightful place of the individual within the greater natural scheme. Friedrich’s works embody a profound, subtle philosophy better than words can ever express and speak to each new generation searching for a place between the sun and the moon.

The imagery in Herzog's films should be a clue to his strong visual and emotional link to both Friedrich and romanticism. This certainly includes his docs, like Grizzly Man, White Diamond, and the recent one about Antarctica, which all dwell and linger on sublime scenes of terrible nature. In his Nosferatu of 1979, a take on the Dracula story, there are compositions of figures in landscapes (as well as a color palette) lifted DIRECTLY from Freidrich paintings, as well as some ideas from Brueghel (but that's not Romanticism, exactly).
I'm not sure where you derive the thought that Romanticism is about man larger than nature-- I've always taken it as man humbled by nature's beauty, terror, power and sublimity. And that certainly is an area of deep concern, conflictedness and struggle in Herzog's films, in my opinion.