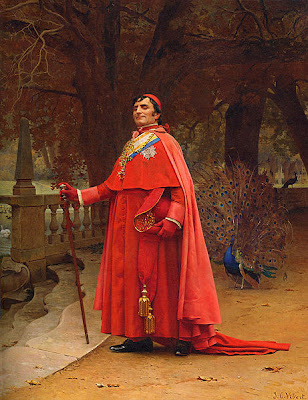 Growing up Catholic in Philadelphia, I saw more than my share of the great spectacle of the Roman Catholic Church, particular events centering around John Cardinal Krol, the Archbishop of Philadelphia from 1961 through 1988 and one of the most powerful Catholic figures in America for most of that time. While in high school, I had the opportunity to play in the group providing the musical accompaniment to several events in which Krol was star of the show. Emerging from a sleek black limo, crimson red robes flashing, and followed by a colorfully dressed entourage, Krol basked in the attention. Even then, I wondered at the pomp and circumstance surrounding what I suspected was a very mean old man. In nineteenth century France, Jehan Georges Vibert put similar feelings into paint with panache and humor. Born September 30, 1840, Vibert painted works such as The Preening Peacock (above) that employed as little subtlety as possible in poking fun at the Catholic clergy. A century earlier, such images would have landed Vibert in jail, but in the nineteenth century, when worldwide anti-Catholicism reached a fever pitch, people simply ate up his humorous depictions of the vanity of Catholic clergy. Vibert didn’t begin his career as a joker. After studying with his grandfather, Jazet Vibert, a successful engraver, Jehan aspired to serious art. Within a few years, Vibert moved on from engraving to oil painting, studying at the École des Beaux-Arts. Vibert soon developed a highly finished style and joined in with the contemporary crowd in painting grand history painting. Eventually, Vibert’s playful personality sought out simple genre paintings of poor people in everyday situations painted with a colorful, humorous touch. After a stint as a sharpshooter during the Franco-Prussian War, the wounded Vibert found his true calling in calling out the Catholic clergy in works such as The Church in Danger (above). Playing off of the grave title and its suggestion of a soul in trouble, Vibert instead shows a crimson-clad clergyman staring down the cards in his hand and not liking his chances of victory. In such works, Vibert brings a light-hearted hand to the often deadly serious business of religious turmoil. Fortunately, the days of the Spanish Inquisition, Reformation, and Counter Reformation were long, long past. 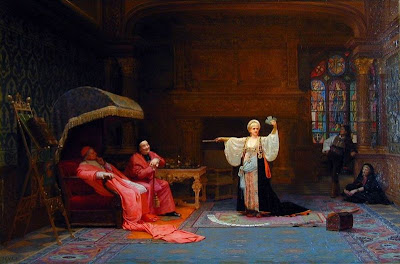 It’s easy to look at Vibert’s works, such as The Fortune Teller (above), and paint him as just a clown, simply because of his comical, satirical bent. However, Vibert wrote several accomplished plays, studied the works of the great satirists such as Jonathan Swift to hone his craft, and even founded the Society of French Watercolorists. An inventor always looking to improve the craft of painting, Vibert developed brushes, varnishes, and special paints, including the “Vibert Red” he used on the cardinals’ robes. In The Fortune Teller, the irony of Catholic Cardinals consulting the “higher power” of a fortune teller is obvious. Look closer, however, and you see the work of a fine Orientalist. Vibert maries the observations he made on a trip to the Middle East in the 1860s to the world of the Western Catholic faith. Vibert clearly makes a joke here, but it’s a beautifully crafted, highly finished joke that, even if you don't appreciate the punch line, the telling itself still bears listening to.