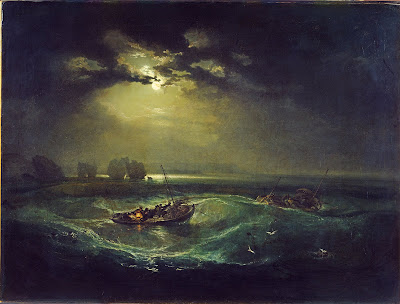 Over Labor Day weekend, just before the Met closed their exhibition J.M.W. Turner, Annie and I were able to make it up to New York City. I reviewed the catalogue last year, while it ran at the National Gallery of Art in Washington, DC, and have been patiently waiting until it came within visiting distance from our home (and with handy grandparent babysitting service nearby). Turner may have been the first real artist that captured my imagination to the endless possibilities of paint. My youthful reading of John Ruskin’s writings championing Turner shaped my earliest impressions, but decades later, Turner still surprises and astounds. Even an early work such as Fisherman at Sea (above) knocks me out. I’ve seen it in reproduction plenty of times, but seeing it in person struck me more than I anticipated. I like to use Annie as a gauge for just how powerful an artist is. I’m too close to the art to trust my judgment any more, but she loved Fisherman at Sea as much as I did for its beautiful, romantic darkness. Surrounded by all the Turner-esque sunrises and sunsets, this moonlit work felt like a cool oasis before moving on to the next rooms and the more intense works. 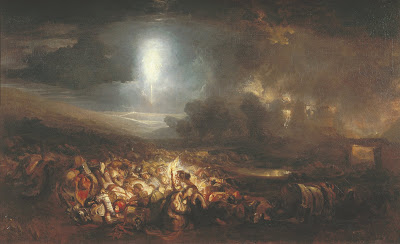 It’s easy to lose sight of Turner’s historicity in light of his pre-Impressionism and, especially in the later works, even proto-Abstract Expressionism. After standing before The Field of Waterloo (above) for a few minutes, I walked away thinking it may have been the greatest anti-war painting of the nineteenth century, or at least in the British tradition. Seeing the mass of humanity laid low by warfare as women and children search for lost husbands, fathers, and sons, the idea of Waterloo as a victory completely disappeared for Annie and me. As a kid, I loved reading military history. Those maps with the big thick arrows cutting across, usually with the generals’ names emblazoned on them, seemed like a great, glorious game. It all seemed so heroic, and neat. Turner displays true heroism in showing the dark side of war, the dirty secret that warmongers don’t want to get out. Such a picture couldn’t have been popular among Turner’s contemporaries, who cast Napoleon as a villain to be had at any cost much as Saddam Hussein or Osama bin Laden fit that role in our day. The cost is always acceptable, of course, when someone else is paying it. 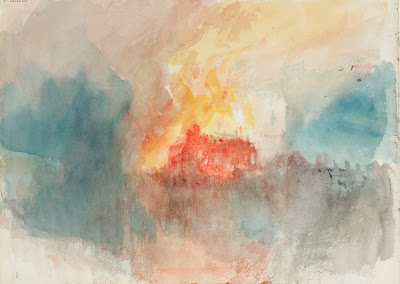 The highlight of the exhibition for me was seeing my favorite painting from the PMA, The Burning of the Houses of Lords and Commons, October 16, 1834, surrounded by the watercolors Turner madly dashed off as the London crowds assembled to witness the conflagration. Painted with just a few colors, each of these (one example above) blooms with fiery red set within a penumbra of dark blue. I found myself looking back and forth from the watercolors to the oil painting, trying to recreate in my mind the link forged in Turner’s mind between them. Of all the rooms of the exhibition, I felt that this room centering on that one painting captured the energy and passion of Turner better than any other. Annie and I agreed that the matching up of the “preliminary” works with the “finished” work increased the enjoyment of all the paintings. For me, it also blurred the line between preliminary and finished. Each of these watercolors deserves a permanent exhibition space as much as the final oil painting. I’ve always believed that the combination of such works to tell the “story” of a painting provides the public with an invaluable glimpse into the working methods of the artist. “I have no secret but damned hard work,” Turner loved to tell his rivals and critics. In those watercolors, the secret is revealed. 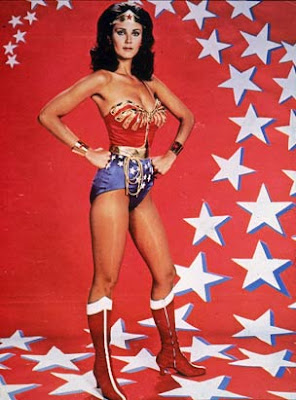 Annie and I also were able to catch the Met’s Superheroes: Fashion and Fantasy exhibition in its final days. It was a thrill to see superhero costumes from the movies such as Superman, Batman, and even the recent Iron Man on display with fashion designers’ interpretations on those characters. Some of the work seemed a little too cobbled together in a Project Runway kind of way, but I’m no expert on what’s “fierce” or not in fashion. A bittersweet moment came when we turned a corner and saw the original Wonder Woman costume worn by Lynda Carter on the 1970s television show (above). Memories of being a 9-year-old boy sitting agog on his parents’ living room carpet watching a woman from another world (played by a real-life woman who looked like she came from another planet) run across the screen raced through my memory. Sadly, looking at the costume made me feel older than my years. Poor conservation or the decay of poor original materials had left the blue elements of the costume looking a sickly shade of purple. Amazingly, Lynda Carter has aged better than her former costume. I’ve read elsewhere that Lynda Carter wore two different costumes, one for acting in and one for posing in (i.e., she’d fall out of it if she moved). I believe that the Met put the posing costume on display, but the pale mannequin standing in for the lovely Lynda was a poor replacement for the real thing, or at least my memories of a 30-year-old television show.

[Many thanks to Alex's Gung Gung and Pau Pau and to his Uncles Gary and Johnny for watching Alex while we went to the Met.]

Red Art fine giclee digital prints are produced on 360gsm matt finish studio canvas. We use the finest ultrachrome inks which are guaranteed for up to 75 years. Pictures are strectched around a 2 cm deep box frame. The artwork continues around the side and is ready to hang without the need for additional framing.

Why pay more for your canvas art when RedArt can offer you perfect collection of high- quality professionally manufactured canvas prints at very affordable prices. Our collections cover more than 150 images and are continually growing
We are sure you will find the perfect piece of canvas art for you.
Have RedArt print your pictures onto canvas create unique artwork for home, family, and friends.
Preserve your fondest memories for years to come. Perfect as a gift.
Ideal for:
*wedding *christening *birthday *family holiday *child's drawing *graduation *anniversary
If you are not sure what size canvas will suit your image or if you need advice on technical information and photograph quality,
you can send your picture by email and we will contact you. Please do not forget to send your contact number
and what maximum size canvas you are looking for. You do not have to make a payment for advice.