The Accuracy of Silence 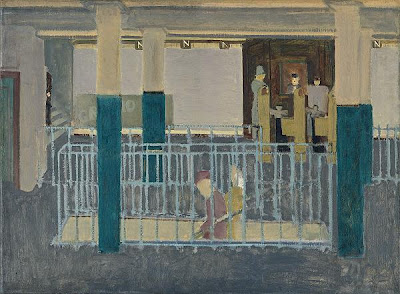 When you hear the name Mark Rothko, you immediately picture his signature works—the big canvases featuring huge blocks of color softly butting against one another, calling us to the same religious experience Rothko himself claimed to have had when painting them. Born September 25, 1903, Rothko traveled a long way stylistically before arriving at those works. Look at any photo of Rothko from any time in his life and you can almost see his mind working furiously behind his eyes, turning over some complex thought on art, life, or both as the smoke from his ever-present cigarette curled upward. With the possible exception of his close friend Barnett Newman, Rothko may be the most widely read, most intellectual of American artists. A Jewish intellectual, Rothko read Friedrich Nietzsche’s The Birth of Tragedy before the Nazis’ vile distortion of Nietzsche’s idea of the Übermensch tainted the philosopher’s name forever. With all those words dancing in his head, Rothko fought long and hard to arrive at his works of cosmic silence. In the beginning of his career, Rothko instead tried to incorporate those words and his surroundings in works such as Entrance to Subway (above, from 1938), a stylized vision of his native New York City. Hints of Giorgio de Chirico emerge here as Rothko struggles to express in imagery all the feelings of isolation and loneliness he already knew how to express in words. 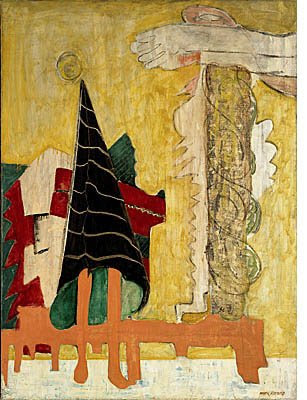 Rothko’s Sacrifice of Iphigenia (above, from 1942) shows Rothko moving from the modern world as subject to a timelessness he found in Greek tragedy. Reading the works of Sigmund Freud and Carl Jung and later J.G. Frazer’s Golden Bough, Rothko steeped himself in the idea of the usefulness of the old myths for understanding the modern world and the human condition itself. Not only does Rothko remove himself from the real world for the mythic realm, but he also stylistically moves from a recognizably realistic depiction to a more abstract style. Rothko wants to write the story of human nature in a language accessible to everyone and believes that mythology holds the key. Words continue to dominate his painting, yet it is the words that continue to get in the way of his ultimate goal. 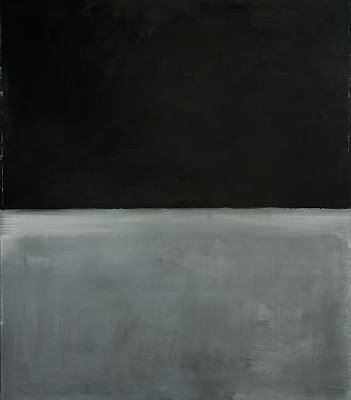 “Silence is so accurate,” Rothko once said. After so many years of so many words and so many words but into different styles, Rothko finally realizes that what he wants to express is ultimately inexpressible in words or a visual representation of words. By going fully abstract, Rothko reached the heart of what he wanted to say. Rothko actually refused to be called an abstract artist and pointed out that his paintings expressed very real, very concrete emotions and ideas—the accurate silence he longed for after all the inaccuracies of previous styles and modes of expression. Standing before a Rothko truly can be a religious experience. The Rothko Chapel is apparently one of the most moving art spaces on earth. I hope to one day see it in person. It’s certainly not something you can even remotely experience in person. Sadly, after Rothko found success with his signature style, he soon grew discontent with it. Even after finally achieving his goal, he never stopped thinking. The words, and the thoughts they conveyed, kept pressing him on. In the last years of his life, the colorful canvases gave way to darker compositions, such as Untitled (above, from 1969). In 1970, Rothko tragically took his own life, finally silencing the words in his head and leaving us to ponder the mysteries of the cosmos, fortunately with his works to ease the way.

silence is accurate. genius and simplicity at its greatest. amazing painting choice