A Rogue and Peasant Slave 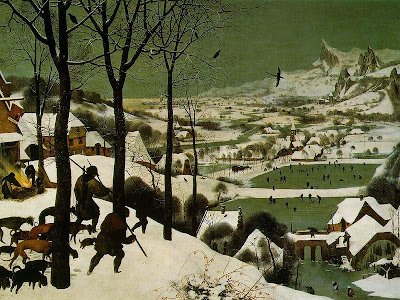 Legend has it that Pieter Bruegel the Elder would disguise himself as a peasant and crash peasant weddings and other gatherings to collect material for his depictions of that simple way of life. Born sometime in 1525, Bruegel became the greatest painter of the sixteenth century’s Netherlandish Renaissance before his death on died September 5, 1569. In works such as The Hunters in the Snow (above, from 1565), part of a larger series showing peasant life in different months, Bruegel shows hunters returning to their village after a long, hard slog in the January snows. Bruegel painted during the time now known as the Little Ice Age, when seemingly endless winters made an already tough existence even tougher. The matching green ice and sky breaking up the expanses of pure white snow enshrouds the entire scene with the sense of death, against which the tiny dark figures and their homes seem but futile efforts at life. Despite such hard times, Bruegel found a dark humor in life itself and painted both the pain and joy of the peasant life. 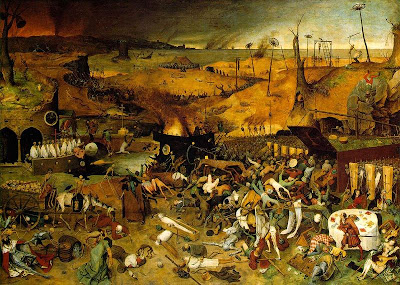 Bruegel traveled to Italy in the 1550s and saw the work of the great Italian Renaissance masters, but the greatest influence on his aft after 1556 or so was Hieronymus Bosch. Bruegel’s The Triumph of Death (above, from 1562) shows a shared demonological interest with Bosch, but maintains focus on the natural landscape and the everyday life of peasants. Malevolent skeletons mow down the living with scythes as a wasteland of withered trees and grass stretches to the horizon. Like Bosch’s works, Bruegel’s The Triumph of Death doesn’t leave much for the faithful to believe in. Living in the unforgiving, brutish world of the time, Bruegel refuses to depict a heavenly host arriving from on high trailing clouds of glory. The Protestant Reformation enflamed the religious passions for almost half a century by the time Bruegel painted The Triumph of Death, but the pessimism born of such religious conflict seems remarkably fresh. 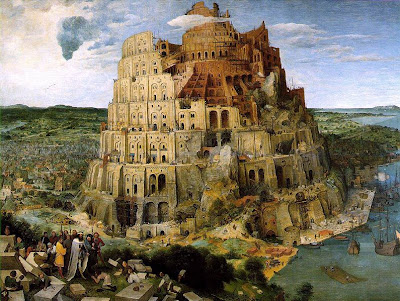 Bruegel painted many conventional religious scenes, still the bulk of the art business in his day, but his The Tower of Babel (above, from 1563) shows that Bruegel could also paint a disturbingly unconventional religious work, too. Bruegel’s tower threatens to topple, just as in the Bible story, but anachronistically it bears a striking resemblance to the Roman Colosseum, a symbol both of the pride of the Roman Empire as well as the site of the religious persecution of the early Christians. Is Bruegel trying to say that the Reformation-era arguments recreate the language barriers of Biblical Babel, thus bringing down the entire “house” of civilization? In evoking Rome, does Bruegel blame the Pope, the bishop of Rome, for Europe’s decay? Regardless, Bruegel chooses the Colosseum, already in disrepair by his time, as a symbol of his time’s dysfunctionality. When he died, Bruegel ordered that his most subversive works be destroyed, fearing repercussions for his family, which included future artists Pieter Brueghel the Younger and Jan Brueghel the Elder. Bruegel the Elder failed to live long enough to teach his sons how to paint, but in the legacy of his works he taught them, and others, how to think.