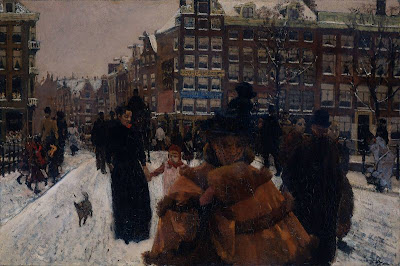 When the skies above Amsterdam turn slate grey and rain begins to fall, the locals lament, "Echt Breitnerweer" (in English, “Typical Breitnerweather”) in memory of the great Dutch Impressionist George Hendrik Breitner. Born September 12, 1857, Breitner loved to paint the city in inclement weather, as in The Singel Bridge near the Paleisstraat in Amsterdam (above, from 1897). Breitner earned and enjoyed the nickname “the People’s Painter” in his native Netherlands, feeling a kinship with the everyday people of the streets. In 1882, Breitner met and befriended fellow artist Vincent van Gogh. Breitner and Van Gogh often went to the poorer sections of The Hague in search of subjects to sketch. Although they shared a common interest in the poor, Breitner and Van Gogh diverged when it came to technique, especially color. While Van Gogh went off to France and imbibed the rainbow of colors he found there, Breitner never escaped the dark, depressing color spectrum of his native Amsterdam. 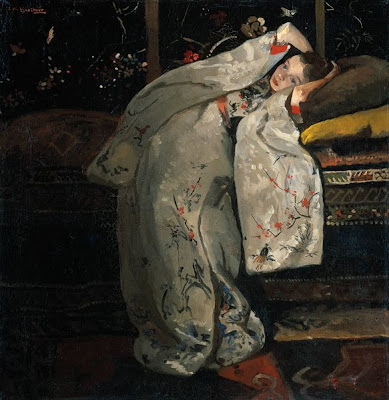 Like Van Gogh and many artists of the period, Breitner grew fascinated with the art of the East and Japonisme. Brietner found great beauty in the intricate designs of the Japanese kimono and painted a series of portraits of young women in kimonos, including Girl in a White Kimono (above, from 1894). Strangely, Breitner hides much of the beauty of the garment in shadow. He almost entirely obscures the beauty of the young woman not only in the bulky fabric but also by posing her in an awkward manner. There’s nothing sexy about Breitner’s portraits of women in kimonos. Any kind of exotic allure disappears in his hands, yet there’s still something fascinating about them. It’s as if he struggled with the opposing impulses of embracing and rejecting the “other” and wanted to paint that in these portraits. After such close contact with Van Gogh, whose unfettered adoption of foreign influences was almost as strong as his erratic personal nature, Breitner may have connected the two and feared for his own mental safety if he strayed too far from home artistically. 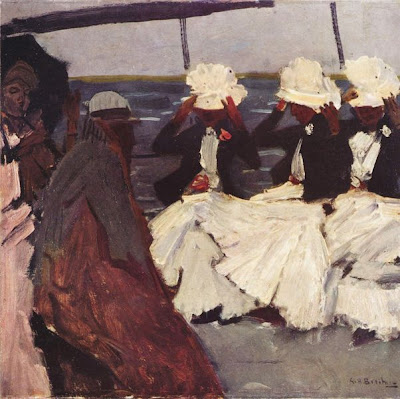 Despite these divergences with Van Gogh, there are may similarities, the strongest of which is an eye for the beautiful simplicity of the life of the Dutch poor. In Promenade Deck with Three Ladies (above, from 1897), Breitner freely depicts three women on a ship’s deck to the point that they lose almost all individuality. They hold onto their hats in the violent winds, obscuring their faces. The whiteness of their hats and skirts pops against the darker tones of the rest of the painting. That strong contrast of light and dark drew Breitner’s eye and inspired this almost abstract painting of people on a ship. By this time, Breitner had become a proficient photographer, capturing much of the look of the dank city streets on film that a representative approach to painting may have seemed redundant. In works such as Promenade Deck with Three Ladies, Breitner tries to get at the soul of the poor beneath the rustic exterior. When Breitner looks with his heart into the heart of these people, we truly find “typical” Breitner.