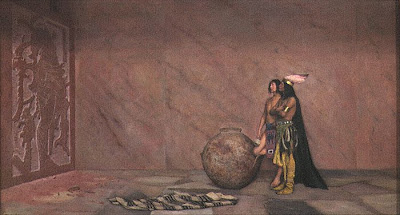 When George de Forest Brush studied with Jean-Leon Gerome in Paris, Gerome taught Brush the same two things he taught all his students: a love of the human figure and a passion for romantic adventure. Born September 20, 1855, Brush took Gerome’s lessons in a whole new direction. While his teacher explored the Middle East and the Orient in his art, Brush ventured out into the romantic frontier of the American West. In works such as The Sculptor and the King (above, from 1888), Brush took the classical approach to painting the human figure and applied it to the life of the Native American people. Unfortunately, Brush arrived long after the Native American way of life had become a thing of the past, so his paintings recreate an idealized version of that world. In The Sculptor and the King, Brush confusedly mixes Mayan wall reliefs with American Indian culture, resulting in an anthropological jumble, but the beautiful technique and sympathetic approach to Native American life, which popular American culture had demonized by that time after years of conflicts over land, more than make up for the factual errors. 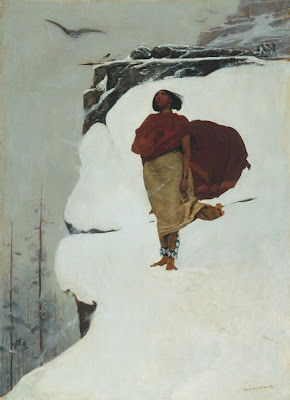 The National Gallery of Art in Washington, DC, currently has an exhibition of Brush’s “Indian Paintings.” During his lifetime, such works brought Brush his greatest fame and recognition by other artists. As pointed out here, N.C. Wyeth emulated many of Brush’s Native American paintings in his own works, including Brush’s Mourning Her Brave (above, from 1883). The idea of ascribing human emotions to allegedly “subhuman” Native Americans was a novelty at the time, harking back to the days of George Catlin, who had first-hand knowledge of native people. Frederic Remington depicted Indians as pure killers. William Ranney had little knowledge of Indians, visual or otherwise, yet still chose to depict them as a malicious, if unseen, force. Although Brush came too late to see the great native civilizations of the plains, his belief in the romantic concept of the “noble savage,” helped him forge a vision of these people as ideal versus the compromised life of “civilization.” 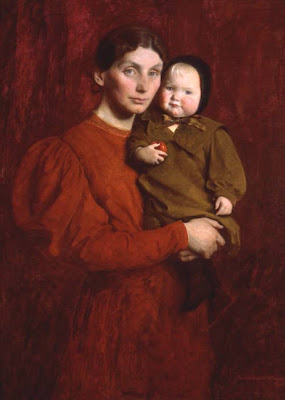 Once he gained prominence with his Western paintings, Brush’s art came into demand and he was able to concentrate on the lucrative field of portraiture. His Mother and Child (above, from 1902) shows the rich color and subtle molding Gerome taught to all his students. Brush’s mothers with their children often resemble Renaissance madonnas in their lavish glamour. Whereas someone like Thomas Eakins, another Gerome student, took those lessons and went to the extreme of studying physiology and figure to the near exclusion of romanticism, Brush goes to the opposite extreme, infusing romanticism into everything at the expense of exactitude. Brush strove to bring the ideas of Europe to the American arena, superimposing Old World values on the New World, including its original inhabitants. Brush took an American West already turned mythic and gave it a better set of myths to live on.