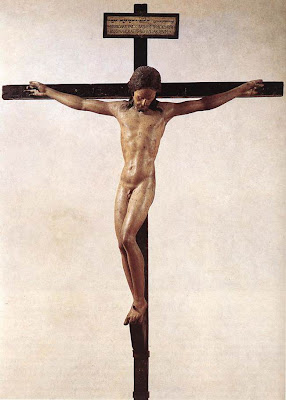 Is there any more Catholic space on earth than the Sistine Chapel? In that sacred space, popes are selected and papal religious functions are conducted. The majestic artwork commissioned by first Pope Sixtus IV and later Pope Julius II now stands as the ultimate visual expression of Christianity in the minds of most believers and nonbelievers around the world, with Michelangelo’s ceiling frescoes and wall fresco of The Last Judgment often overshadowing even the work of Raphael and Sandro Botticelli. Such a pervasive mindset makes Rabbi Benjamin Blech and Roy Doliner’s The Sistine Secrets: Michelangelo’s Forbidden Messages in the Heart of the Vatican even more shocking, threatening to challenge everything we thought we knew about the Sistine Chapel and those great works of art. Blech and Doliner essentially argue that the best laid plans of Sixtus IV and Julius II to turn the Chapel into a memorial to the power of the papacy, particularly the power wielded by the della Rovere dynasty to which those two pontiffs belonged, foundered against the better intentions of Renaissance artists, particularly Michelangelo. Tracing Michelangelo’s life back to his youth in Florence at the home of Lorenzo di Medici studying under humanist scholars, Blech and Doliner argue for the lasting effect of those scholars’ teachings in the Torah, Talmud, and Kabbalah. “Michelangelo was able to subvert the entire project,” they write, “in order to secretly promote his own ideals, especially those linked to humanism, Neo-Platonism, and universal tolerance,” including tolerance of the Jewish faith by the (then) intolerant Catholic church. In The Sistine Secrets, Blech and Doliner uncover a whole new side of Michelangelo—the Jewish side! Pointing out a recently rediscovered work by Michelangelo, the Santo Spirito Crucifix (above, from 1493), they emphasize not only the anatomically correct rendering (including painted chest and underarm hair) but also the inscription above the figure, printed not only in the customary Latin (“INRI”), but also in Hebrew and Greek. When Michelangelo alters the wording in Hebrew from “King of the Jews” to “King from the Jews,” he begins a life-long struggle to resist the anti-Semitism of the Catholic church and restore the true roots of the faith, albeit in code. “Michelangelo spoke truth to power,” Blech and Doliner write, “and his insights, ingeniously concealed in his work, can at last be heard.” 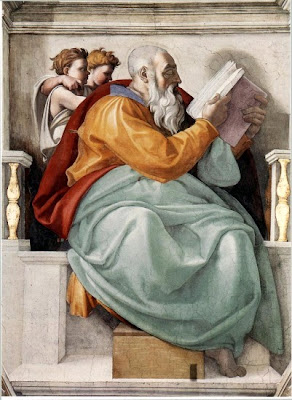 Subverting Julius II’s plans put not only Michelangelo’s career in jeopardy but also his very life. Crossing the powerful pontiff meant a swift and painful death. If the “code” ever became public, Michelangelo would pay dearly. With a cunning grasp of human psychology, Michelangelo tricked Julius II by playing to the pope’s greatest weakness—vanity. Dedicating the chapel ostensibly to the Virgin Mary and Jesus, Julius II hoped that their glory would reflect on his legacy. Yet, Michelangelo talked Julius II out of his original designs, replacing them with a ceiling fresco of over 300 figures of which 95% are Jewish, with the other 5% pagan figures. Not a single personage from the New Testament appears. Under the cover of painting these figures as leading up to Christ, Michelangelo snuck in the entire tableau of Jewish history. Even over the papal entrance to the Chapel, where Julius II requested Christ be painted, Michelangelo painted instead the prophet Zechariah (above), getting away with the switch by giving Zechariah the face of Julius himself. Michelangelo, however, gets the last laugh by painting one of the putti standing behind Zechariah/Julius “giving the fig” (the Renaissance equivalent of the middle finger) from the “safety” of the shadows. Centuries of grime obscured this gesture until the recent restoration, which reveals Michelangelo’s rebellion to a new generation. On a more intellectual level, Michelangelo’s choice of Zechariah, whom Blech and Doliner call “one of the most universalist, inclusionary figures of the Hebrew Scripture,” raises a metaphorical “middle finger” to Julius II’s strident rejection of all faiths outside Catholicism. 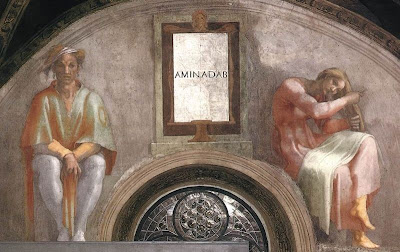 Some of Michelangelo’s frescoed revolts were less obscure for Julius and that generation to understand and, therefore, more brazen. The figure of Aminadab (above, on the left), an ancestor of David and, therefore, Christ, wears on his left arm a yellow ring of cloth resembling the badge Jews were forced to wear by the Fourth Lateran Council and the Inquisition. “Here, directly over the head of the pope, the Vicar of Christ,” the authors write breathlessly, “Michelangelo is pointing out exactly how the Catholic Church was treating the family of Christ in his day: with hatred and persecution.” By putting Aminadab directly over Julius II’s head, Michelangelo calculated that it would never be seen by the pontiff while he conducted his business in the Chapel. Again, the restoration helped bring such details back to light today. (One of the great frustrations of The Sistine Secrets is the scarcity of color plates and the high percentage of pre-restoration images that forced me to consult other books just to see what they were referring to. That problem, of course, is the fault of the publisher aiming towards a popular audience rather than an art history audience and can’t be put on the authors themselves.) 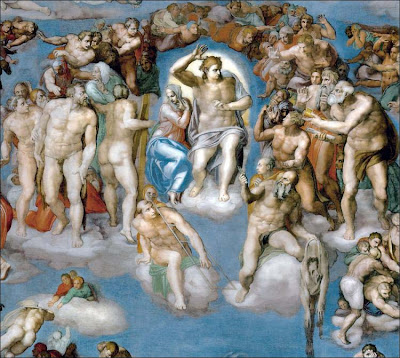 When Julius II ordered Michelangelo back to the Sistine Chapel to work on the wall fresco of The Last Judgment, Michelangelo finally had to include Christ and the Virgin Mary in his work, but he still had a few more tricks up his sleeve. The Christ of Michelangelo’s The Last Judgment (above) resembles no other Renaissance Christ, instead taking his “look” from the idealized sculptures of the ancient Greeks and Romans, the pagan ancestors of Catholicism whose philosophy Michelangelo consumed back in Florence. After sneaking the pagans into the picture, Michelangelo finds room for some Jews in Heaven. At about 2 o’clock from Christ’s head appear two figures wearing hats identifying them as Jews. “One is wearing the two-pointed cap that the Church forced Jewish males to wear to reinforce the medieval prejudice that Jews, being spawn of the devil, had horns,” Blech and Doliner write. “The other Jew is wearing a yellow cap of shame, the kind that the church ordered Jewish men to wear in public in 1215.” Near these two Jews, Michelangelo places a portrait of the man who taught Michelangelo all about the Greeks and the Jews—Pico della Mirandola, whom the church excommunicated for such teachings. Michelangelo tops even that bold maneuver by including the portrait of his lover Tommaso dei Cavalieri and placing the handsome young man directly in Christ’s line of vision. (Daniele da Volterra, Michelangelo’s friend and last surviving student, altered Cavalieri’s appearance to that of an old man in the later retouching he performed after Pius IV’s threat to destroy the fresco.) Placing Jews, excommunicated radicals, and homosexuals in Heaven, Michelangelo peoples the Pope’s fresco with the very people that the church excluded then, and still. 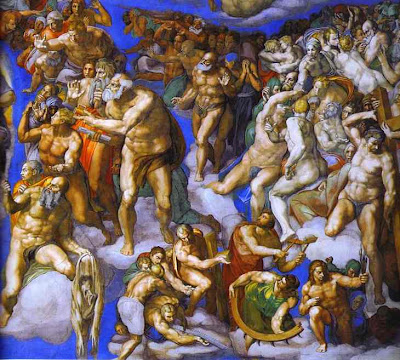 As subtle as Michelangelo could be, he also pushed the envelope with other images. Renaissance depictions of the Last Judgment usually showed the male chosen greeting one another into Heaven with “manly” handclasps. The men entering Michelangelo’s Heaven fondly embrace and even passionately kiss (above), acts that can hardly be misinterpreted. Amassing a huge store of evidence, Blech and Dolino present a compelling case for the rebelliousness of Michelangelo’s Sistine Chapel art that goes far beyond fanciful interpretation. Other, more conventionally Catholic interpretations, such as Father Heinrich Pfeiffer’s The Sistine Chapel: A New Vision (reviewed here), remain valid despite The Sistine Secrets, affirming the universality and multidimensionality of Michelangelo’s art. Such different interpretations conflict, of course. Pfeiffer stresses the involvement of Vatican-appointed theologians in the Sistine Chapel’s art, yet Blech and Dolino neither mention such theologians or how Michelangelo could have snuck past their more educated and presumably attentive eyes. How Michelangelo managed this feat of subversion fades next to the greater question of why, however, which Blech and Dolino address beautifully, connecting the flaws and prejudices of Michelangelo’s time with those of today. Just as the modern Catholic Church continues to extol many of the anti-humanist tenets of the past, Western Civilization continues to repeat the sins of the past in an endless cycle of historical amnesia. Perhaps looking back to Michelangelo’s frescoes as a political statement against his time will awaken us not only to new possibilities in appreciating his art but also to new possibilities in addressing the injustices right under our noses all this time.

I really enjoyed this post! I've always been fascinated by Michelangelo's neoplatonism, but it's really fascinating to get this kind of a walk-through of the subversive elements in his work on the Sistine Chapel. Thanks!