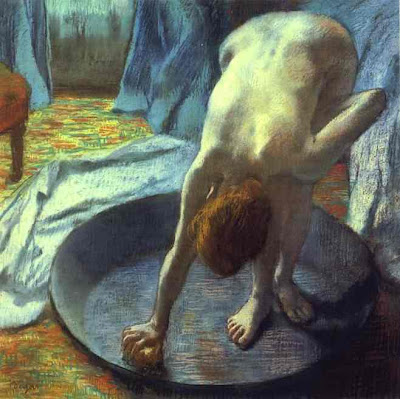 In an episode of Seinfeld titled "The Apology," Jerry’s new girlfriend Melissa walks around his apartment naked all day long. After enjoying the view for a while, Jerry soon learns the difference between “good naked” and “bad naked,” finally deciding he can’t take any more after Melissa does “a full bodyflex on a pickle jar.” Edgar Degas depicted the nude female form in various media in countless poses, but I can’t say that any of them qualify as “sexy.” In fact, Degas, born July 19, 1834, seems to specialize in Seinfeld’s “bad naked,” in which a woman contorts in some fashion that puts her in an unattractive light. Degas’ The Tub (above, from 1885-1886) shows a woman washing herself at one of the most awkward moments of the process, nearly bent in half. As with his images of dancers and the dance, Degas found the female form in motion endlessly fascinating, regardless of the aesthetics of the position itself. Yet the balance of the “good naked” versus “bad naked” seems horrible askew. 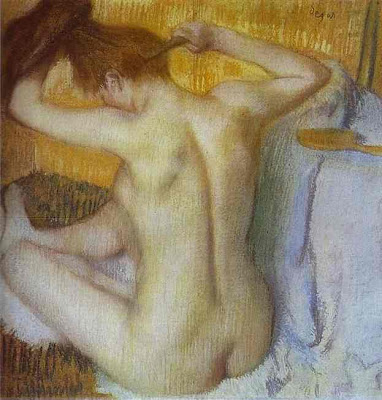 Critics debate Degas’ sexuality even today. We know pretty much nothing about his preferences in that regard. Degas’ devotion to art consumed apparently every ounce of his energy and passion. Critics also accuse Degas of misogyny thanks to antifeminist remarks he often made. Degas’ support of Mary Cassatt, however, seems to poke a hole in that theory, yet Cassatt’s own murky sexuality leaves Degas defenseless once again. Are Degas’ awkward poses of women a form of torture? Degas asked models to hold these sometimes painfully awkward poses for unbearable lengths of time. Was it sadism that led Degas to ask a model to raise her arms in the pose for Woman Combing Her Hair (above, from 1885-1886) long enough for him to capture the moment completely? Although Degas finds himself lumped in with the Impressionism crowd in histories of art, he considered himself a realist. Perhaps these awkward poses are simply a realist capturing the not-so-pretty picture of everyday life. 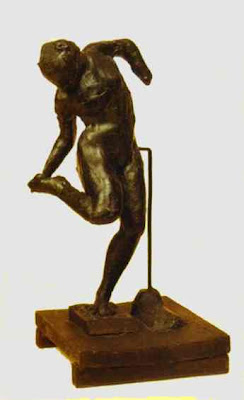 Degas even brought this awkwardness to his sculptures of women, as in Dancer Looking at her Right Foot (above, from 1895-1910). The figure stands so off balance that an additional support was added to keep her from toppling over. Degas used such sculptures to help him complete drawings or paintings when models weren’t available. He’d ask the models for such sculptures to pose nude to get the body right, knowing he could add costuming later. How long do you think Degas asked that young woman to model in such a position? I’ve always loved Degas work. I believe him to be the finest pastel artist of all time. As I’ve come to read more and more about Degas the man, however, it’s become easier and easier to read sinister overtones into his work. Whether that’s fair or not, I can’t answer. But I can say that there’s a lot of “bad naked” in Degas art if you look closely enough. For someone so attuned to the world of beauty, Degas excelled at making even the female nude look ugly and wrong.

Degas draws and paints race horses in a contorted style...so are we to conclude he had a secret hatred of horses? It is obvious that Degas is creating geometric patterns of design in his poses, leading the viewer's eye through the picture plane. It is easy to read sinister sub-conscious plots into just about any artist's work, ruining the enjoyment of viewing their paintings. Leave their sexuality where it belongs, in the privacy of their own lives. And one more thing, I really enjoy your blog!

His poses are far from ugly, they are women in motion, holding only to perform a task. Real women, in poses that caught his eye and imagination, ones he could build around. Art is a reflection of life, not life itself. The angles and forms, curves and lines create a meaning, an emotion, he fills with color. We have his paintings, pastels, and all his sculpture here in LA at the Norton Simon, I love them. He and Bonnard give women as sensual beings, not sexual. Dont even bring up Seinfeld when talking about art Please! Thats all fluffy entertainment, meaninglessness, as contemporary art has become. True art, has purpose, and passion, always has, always will.