When I had the pleasure of meeting Hayden Herrera, whose biography of Frida Kahlo launched the phenomenon of Fridamania in the late 1970s, during the PMA’s exhibition of Kahlo’s work last year, she signed a copy of her biography with Salma Hayek on the cover as Frida from the movie Frida (above) and sighed. “Salma’s beautiful and did a great job,” Herrera said, “but it’s time to put Frida back on the cover.” Born July 6, 1907, Frida the cultural icon and media monster often covers over Frida the woman and the artist. As great as Hayek’s performance once, the nudity and the more salacious scenes in the film just reinforced the whole psychodrama façade of Kahlo’s life and solidified the misperception of her as a force of nature who also found time to paint. Salomon Grimberg’s Frida Kahlo: Song of Herself (reviewed here) and Frida Kahlo: The Still Lifes (reviewed here) tried to cut through the mythology and rediscover the person behind the art, but those books and the centennial celebration hardly put a dent in the great wall of Fridamania that stands between the public and this unique artist. 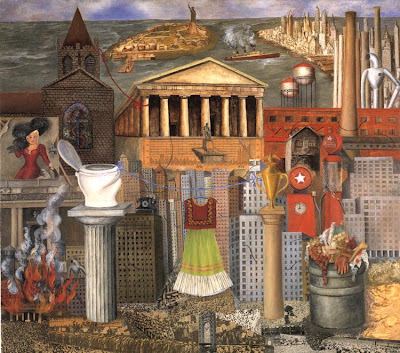 I remember walking through the PMA exhibition and seeing people gravitate immediately to the self-portraits. How could you not? They remain the most startling and compelling works of her oeuvre. Annie walked into the exhibit prepared not to like Kahlo’s art, which she knew only by reputation and reproductions, but came away amazed at the power of the portraits seen in person. I had already seen the portraits at the press preview, so I found myself upon returning looking closer at the non-self-portraits such as My Dress Hangs There (above, from 1933), a “self-portrait” of sorts in that her dress, indeed, hangs there, unoccupied. Kahlo indulged in some collage in My Dress Hangs There, creating the crowds seen at the bottom of the picture from newspaper photo clippings. Mae West, reportedly Diego Rivera’s favorite American actress, appears in a cameo on the left. Upon twin pedestals, Kahlo places a flush toilet and sports trophy to stand for, in her eyes, America’s two proudest achievements—indoor plumbing and professional athletics. Kahlo’s dress hangs between those two shining lights of American ingenuity. Kahlo’s sarcastic humor as well as artistic inventiveness make this painting one to look at over and over. Unfortunately, My Dress Hangs There rarely tours, owned by a private collector. 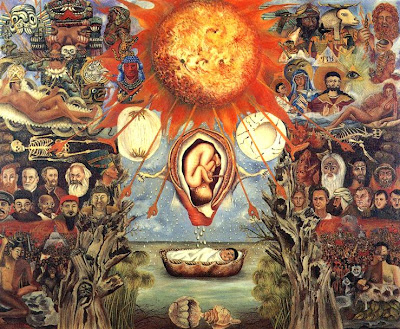 Another non-self-portrait work of Kahlo’s in private hands that rarely tours but should be known by every Fridaphile is Moses (above, from 1945). Frida gathers together pretty much every religious, cultural, and political icon throughout history—from Jesus to Hitler to Stalin, from Marx to Isis to Freud, and much, much more. Baby Moses floats down the river, waiting to be found, in the center of the whole swirling mass of tiny portraits. You can argue meaning in this picture all day because of the many personalities involved, but I think the title Moses is the key. Just as Baby Moses offered the promise of a new day for his people, Kahlo saw art as offering the promise of a new day for humanity if (a big “if”) they could take all of these elements and create a new way of thinking and seeing. Kahlo brings together all these differing philosophies pictorially to suggest that perhaps they can be brought together into one coherent, unifying system of belief. Such utopianism and philosophizing finds little room in the standard Kahlo biography, which overwhelms the public with the personal aspects of her art. Maybe it’s time to look under the covers and see what insights Frida still holds for us.