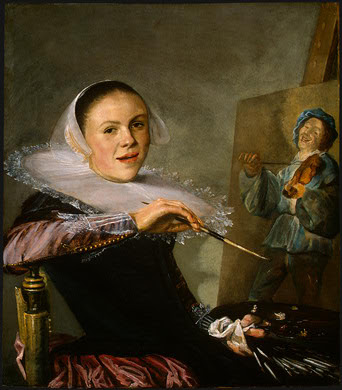 I remember as a kid looking at advertisements for Dutch Masters cigars and thinking, “Where were the women?” One woman, Judith Leyster, broke up the boys club of Rembrandt, Frans Hals, and others and found a place for herself in the hyper-male world of seventeenth-century Dutch art. Baptized July 28, 1609, Leyster confidently painted her Self-Portrait in 1630 (above), around the age of twenty-one, as she began to achieve renown as a portrait and genre painter. The portrait shows the influence of Hals, who was a teacher and great influence. Within a few years, Leyster became the only member of the Haarlem painters’ guild. Leyster even began to take students. When her former teacher Hals stole one of her students, Leyster sued Hals, and won! The same exuberant lust for life that characterizes Hals painting appears in Leyster’s work, clearly mirroring her feisty spirit and underdog mentality as a woman in a man’s world. 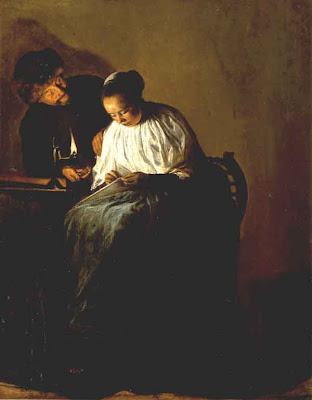 Another great influence on Leyster at this time was Caravaggio. Like many of the other “Caravaggisti,” or imitators of Caravaggio, scattered across Europe, Leyster tried to recreate the amazing light effects of the Italian master. In The Proposition (above, from 1631), Leyster shows a man and woman lit by lamplight. The woman attends to her sewing as the man places a hand upon her shoulder, perhaps as part of the proposition. Perhaps due to the shadiness of the image we read shady intentions in the man’s act. We can’t be sure what’s going on. Such scenes were common in Dutch painting as emblems of lust in action as well as innocence unswayed. Historians love to use such paintings to read hints into the nature of the relationship between Hals and Leyster, but we really don’t know enough to extend it past the roles of teacher and student. Leyster’s style followed Hals’ so closely that many of her paintings were mistaken for those by Hals, whose more famous name brought higher prices. In some cases, forgers would paint Hals “signature” over that of Leyster to pass it off as a work by Hals. Fortunately, enough faux Hals were discovered to be by Leyster that she herself was rediscovered in the 1890s in the same mania for Dutch art that lifted the reputation of Vermeer and other Dutch painters. 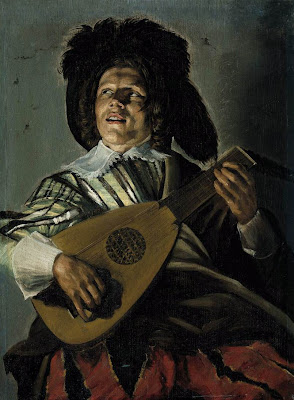 Leyster’s paintings show a great love for life in all its forms. Her Serenade (above, from 1629) shows a young man singing while accompanying himself on a lute. Such musical scenes made up a common genre in Dutch painting of the time, but what separates Leyster’s painting from the crowd is the Carvaggisti light effect of the light source from below, as if a lamp or fire sat just below the bottom edge of the frame. When the Robber Barons of late nineteenth-century America looked for art to invest in, the Dutch market seemed the surest bet. That buying frenzy led unscrupulous dealers to pass off lesser-known names with great talent as Rembrandt, Vermeer, Hals, and others, creating a tangled web of misattribution that still plagues art historians today. Out of that chaos, fortunately, some of those “lesser” names, such as Leyster, were saved from the dustpan of history, finally allowed membership posthumously in the club denied to them in life.