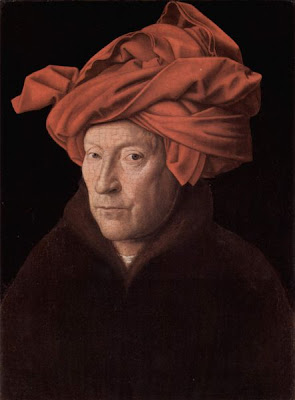 For someone who painted works of such amazing clarity and focus, the picture of Jan Van Eyck himself remains blurry. Buried July 9, 1441, Van Eyck was born sometime before 1395. Guesses range as early as 1360 based on works such as Van Eyck’s Portrait of a Man in a Turban (above, from 1433), which may be a self-portrait. Thanks to Van Eyck’s inscription painted at the bottom, which reads in Latin “Jan Van Eyck Made Me on October 21, 1433,” we know almost definitively who made it and when. Who the man in the turban is, we’ll never know for sure. At the top of the painting, Van Eyck wrote in Greek “I do as I can,” a personal motto that appears on two of Van Eyck’s religious paintings. Most scholars assume from such inscriptions that Van Eyck knew the classical languages and was a learned man, but even that is speculation. If Shakespeare knew “small Latin and less Greek,” according to Ben Jonson, and managed to write Julius Caesar, how hard would it have been for Van Eyck to know just enough of the classics to pull off a few phrases. All we know for sure is in the work itself, which is more than enough. 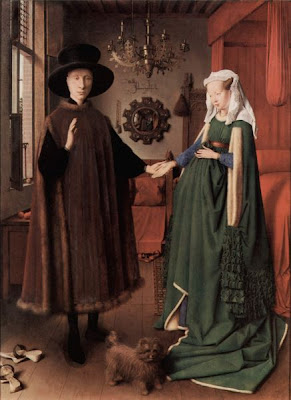 The enigma of Van Eyck the man often extends to the works of the man as well. Scholars have poured seas of ink into the controversies surrounding The Arnolfini Portrait (above, from 1434). Scholars strain even to get the title right. Up until 1997, many believed the portrait showed Giovanni di Arrigo Arnolfini and his wife Giovanna Cenami, but documents proved that it couldn’t be them. Instead, another Arnolfini—Giovanni di Nicolao Arnolfini—and his wife stand as the best candidates, at least for now. The classic interpretations of the portrait celebrating a wedding or a pregnancy also fail to hold up. Van Eyck included so many little touches and “clues” in this work that interpretations multiply like rabbits. In the chandelier above the couple, one candle remains lit (odd for the daytime) while another is snuffed out, leading some to believe that the woman shown is the man’s dead wife, reunited with her husband here in paint. Pushing all that aside, the painting remains one of the landmarks of early painting. The reflection in the mirror on the back wall may be the most famous reflection in all of art. If only Van Eyck had painted a tiny portrait of himself in that reflection, too. 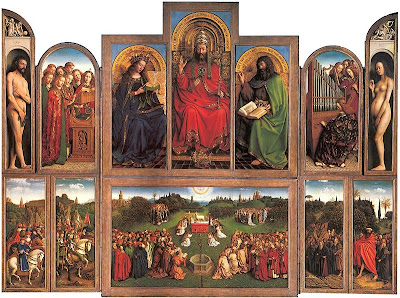 What sets Van Eyck apart from other masters of the fifteenth century and sets the stage for Northern Renaissance painting is his ability to combine attentive realism with the trappings of religious fantasy. The Ghent Altarpiece (above, from 1432) shows the major figures of Christianity against a recognizable backdrop of Netherlandish landscape. The clarity of such works on panel led many scholars to believe that Van Eyck literally invented the technique of oil painting to replace the then-standard practice of tempera. Artists in several cultures had been using oils in painting for centuries, we now know, but Van Eyck took that technique to new levels, opening the eyes of later generations of Europeans to the possibilities of oil painting over tempera. The fact that Van Eyck signed his paintings, an unusual practice for the time, shows that he not only earned the star power to leave his mark on his works but also that he had some sense of his importance in the history of art. Without such calling cards, literally painted onto his masterpieces, even the little we know of Van Eyck might have been lost.
Posted by Bob at 12:02 AM