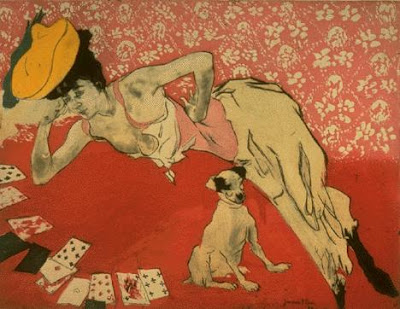 What must it have been like growing up the brother of Marcel Duchamp? Gaston Duchamp, better known as Jacques Villon, must have felt overshadowed at times by his little brother, twelve years his junior. Born July 31, 1875, Villon took his new name in honor of French poet François Villon and set out to create his own type of poetry separate from that of his famous sibling Marcel and his lesser-known artistic siblings Raymond and Suzanne. In prints such as The Cards (above, from 1903), Villon shows his debt to the works of Henri de Toulouse-Lautrec, whose stunning graphic style swept through Europe and changed the way Villon and other graphic artists who followed went about their work. While Marcel delved into the deep thought experiments of Dada and Surrealism, Villon traveled in Fauvist, Cubist, and Abstract Impressionist circles, slowly moving away from the Post-Impressionism of Toulouse-Lautrec to a more modern look. 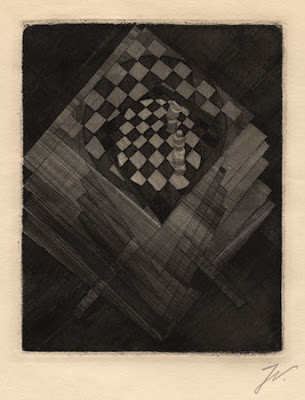 Villon excelled at printmaking and etching. The Checker Table (above, from 1920) shows Villon trying his hand at Cubist etching. (I wonder if Villon and Marcel, famous for his love of chess, ever squared off over a board or two.) The board and the table it rests on seem to be disassembling themselves off into space, much like Marcel’s Nude Descending a Staircase, No. 2 painted eight years earlier. Like Marcel and so many other European artists, the 1913 Armory Show served as a coming out party for Villon, introducing his art to an American audience for the first time. While some of those artists met resistance from the American markets, Villon found a second home and acceptance for his more accessible Cubist works such as The Checker Table. 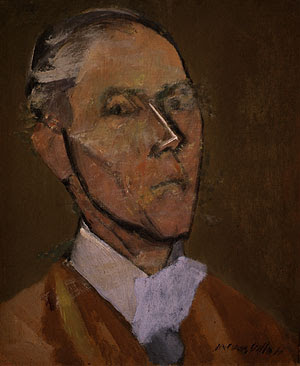 While Marcel always seemed to be an art movement unto himself, always wary of labels and the very nature of institutionalized art itself, Villon seems more at home in groups, helping others find an audience. Although Marcel and Raymond also helped form the Puteaux Group that included Francis Picabia, Robert Delaunay, and Fernand Leger, Villon more than his brothers organized the Section d'Or exhibitions that brought those innovative artists to the public eye. In Villon’s Self-Portrait from the 1950s (above), he seems almost forbidding, perhaps poking fun at his open, inviting character. Marcel always seems to be in exile from himself and art, while Villon always seems secure in his place in the world and art-making. Perhaps the younger brother could have learned a few things from his older brother. Just the choice of the graphic medium, with its easy reproduction and often illustrative nature, speaks of Villon’s greater desire to communicate in contrast to his still-befuddling, often overshadowing younger brother.