The Politics of Imagery 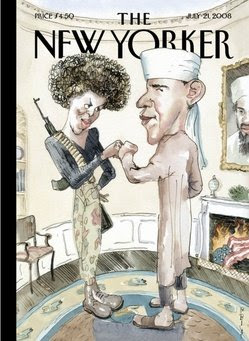 The cover of the July 21, 2008 issue of The New Yorker features a satiric depiction of Senator Barack Obama and his wife Michelle by Barry Blitt titled “The Politics of Fear” (above). The Senator appears in Muslim clothing while his wife dons military dress and carries an AK-47 rifle in the Oval Office. The American flag burns in the fireplace as Osama bin Laden’s picture hangs above the mantle piece. Blitt defends the cover thus: "I think the idea that the Obamas are branded as unpatriotic [let alone as terrorists] in certain sectors is preposterous. It seemed to me that depicting the concept would show it as the fear-mongering ridiculousness that it is." I usually enjoy Blitt’s work and think he’s one of the edgier satirists working in America today. Normally, the magazine keeps his more controversial pieces inside the issue, but chose this one to put on the cover. If it hadn’t been on the cover, I doubt the same hysteria would have ensued. But it is, and it has.

I’ll take Blitt at his word that his intentions were sincere. Obama’s had to create an entire website called Fight the Smears just to fend off the more absurd and hateful rumors floated by his enemies. Blitt tries to show just how ridiculous those smears are by giving them visual form. Unfortunately, he’s included many of the most vicious in one searing image, including the attacks on Michelle Obama, which all stem from prejudiced stereotypes of her as “Obama’s Baby Mama” and an “uppity” black woman. Putting an absurd Afro on the Princeton- and Harvard-educated lawyer insults not only African-Americans but all women of achievement.

For me, the litmus test of what satire is acceptable is “the other shoe” principle. What would the reaction be to a depiction of John McCain as a visibly tired 72-year-old man, ravaged by cancer, married to a wealthy heiress he married after a long affair while still married to his first wife who waited for him while imprisoned in Vietnam, deeply involved in the Keating Five scandal, singing a Beach Boys’ song parody about bombing other countries? How would people feel about Cindy McCain shown as a drug addict who funded her addiction by stealing funds from a Vietnam’s veterans charity she operated? I doubt any McCain supporter would appreciate such an image. I doubt anyone will ever have to worry about that kind of “satiric” image, however, since such an image would be based on fact, not lies and innuendo. (As Harry Truman once said of Republicans, “If they will stop telling lies about Democrats, we will stop telling the truth about them.” ) Sadly, Blitt’s image, intended to reveal the absurdity of mud-slinging attacks, instead reveals the absurdity of the American media itself as stenographers to the worst character assassins in the political process.
Posted by Bob at 6:27 PM

I agree this cover image is an outrage and in very bad taste, no matter what your political affiliation. Shame on The New Yorker. However, as to your quote from Truman: give us a break -- do you really think there are no lying, dishonest Democrats? There are corrupt politicians on both sides of the aisle. Actually, I'd challenge you to name a politician who is not corrupt. You don't get to where McCain and Obama are in politics without piling up some dirty laundry. And I'm surprised that as a compassionate liberal you'd launch such a vicious attack on Cindy McCain. If she were married to a Democrat, anyone who wouldn't be empathetic to her battle with the disease of addiction would be considered a hard-hearted ogre.
Voice of Reason