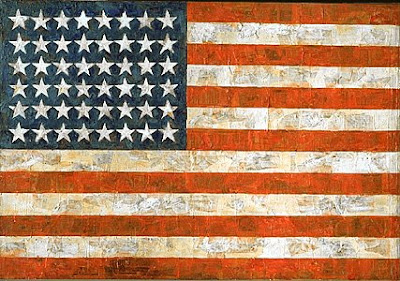 A Happy Independence Day to all Americans all around the world! We all have our differing opinions, especially in election years, of what direction our country should take, but we can all agree that we want our country to be the best that it can be not only for ourselves but for all the people on our fragile planet. Jasper Johns’ Flag (above, from 1954-1955) shows his Cold War-influenced take on Old Glory, which still makes us look at the flag afresh as something alive rather than a relic of the past. I recently watched the masterful anti-war film In the Valley of Elah, starring Tommy Lee Jones and Charlize Theron, and recommend it to anyone who thinks that the flag no longer has any meaning. 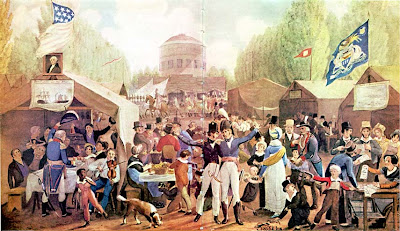 Of course, the Fourth of July is primarily a day of rest and recreation for Americans. I plan on grilling up something tasty for the family. Perhaps Bobby Flay will drop by for a Throwdown! I’ll be ready with my big, blue insulated glove to meet the challenge. John Lewis Krimmel painted some of the earliest scenes of Independence Day celebrations, including one from 1819 shown above. Growing up in Philadelphia and working my entire adult life literally a block away from Independence Hall, I’ve always been fascinated with the history of Independence Day and how Philadelphia, despite all its current problems, always becomes the center of attention on that special day. 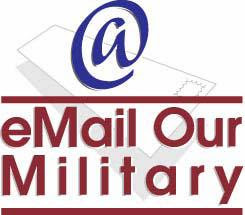 If you’d like to channel all those patriotic feelings you're experiencing today into a good cause, please consider signing up for eMail Our Military, which takes the idea of pen pals into the electronic age. eMOM will connect you with a service member looking for some mail to brighten their day. For people whose lives are often pure chaos, the normalcy of your life, which may seem boring to you, is pure ambrosia to them. Just the idea that someone is out there bathing babies, chopping vegetables, or even grilling burgers on the deck brings a slice of home to them and makes their sacrifices seem worthwhile. I’m no supporter of the war, but I support every man and woman fighting it and would bring them all home in a second, if I could. Failing that, bringing home to them seems the least we can do.

[Many thanks to Christine at PurpleCar for letting the talented and beautiful Annie know about eMOM and to Annie for passing it on to me.]

Patriotism is the last refuge of a scoundrel. --Samuel Johnson

Thank you so much for blogging about what we're doing to help support our troops. It is greatly appreciated by the service members who will benefit from it.

Thanks for spreading the word!