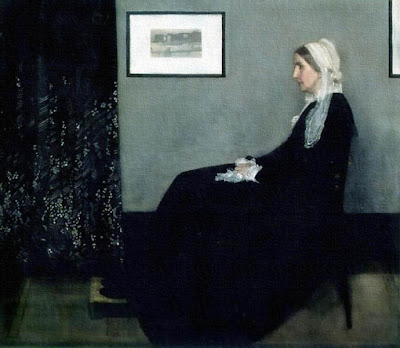 “All art constantly aspires to the condition of music,” Walter Pater famously wrote. That phrase ran through my head when I stood in front of James Abbott McNeill Whistler’s Arrangement in Grey and Black: The Artist's Mother (above, from 1871), better known as simply Whistler's Mother. Standing there years ago at the Musee d’Orsay in front of one of the most famous paintings in the world, I found myself liking it even more—the opposite reaction to my encounter with the Mona Lisa. Born July 14, 1834, Whistler excelled at art of shameless self-promotion, giving such friends (and later enemies) as Oscar Wilde and Gustave Courbet stiff competition for the publicity hound crown. In his art, however, Whistler stows away his bravado and often achieves a delicate balance of harmony and tone that truly aspires to the level of compositional perfection of a Beethoven piano sonata or Mozart string quartet. Unfortunately, the titles in which Whistler hints at his intentions are such mouthfuls that shorthand such as Whistler’s Mother soon displace his original goals, which only close attention can truly appreciate. Like a fine symphony, a Whistler painting cannot be rushed. 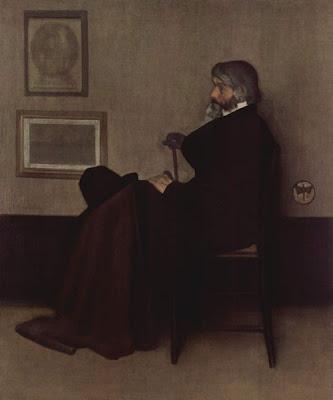 Two years after painting his mother, Whistler attempted a similar portrait of the author Thomas Carlyle known as Arrangement in Gray and Black no. 2 (above, from 1873). The similarities between the two paintings are obvious, but the individual portraits embedded within the similar color palettes couldn’t be more individually unique. Around this time, Whistler added musical titles to non-portraits as well, such as the infamous Nocturne in Black and Gold: The Falling Rocket, which John Ruskin mocked as “flinging a pot of paint in the public's face.” Whistler, in response, sued Ruskin, eventually winning the libel case but receiving only a farthing in damages and thus ruining himself financially. I find it truly amazing that Whistler could keep the two sides of his personality so equally—the tender colorist who painstakingly worked out fragile harmonies of tone until they rang true to his “ear” coexists with the raging public figure for whom no publicity was bad publicity. Perhaps it was the yin of the artist that allowed the yang of the public persona to exist without going entirely out of control.

John Singer Sargent, William Merritt Chase, and Walter Sickert, among many others, counted Whistler as a powerful influence. When I look at one of Sargent’s bravura portraits that feature a seemingly infinite range of whites, I think of works by Whistler such as Mother of Pearl and Silver: The Andalusian (above, from 1888-1900), in which Whistler not only captures the textures of the woman’s clothes in their individuality but also brings them all together into one powerful single effect. Like the Japanese art Whistler so loved, his tonal studies posing as portraits speak in a soft voice that demand attention. Unfortunately, the brashness of Whistler’s life and the mad dash of modern living conspire to push us along as if there were nothing to see here, instead of an entire symphony crammed into a single panel.