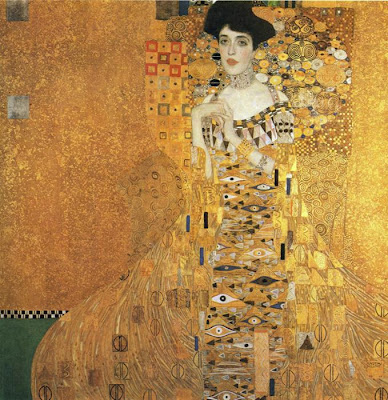 One of my favorite exhibitions over the past year was the Neue Galerie’s Gustav Klimt: The Ronald S. Lauder and Serge Sabarsky Collections, the biggest exhibition of the works of Klimt ever to be seen in the United States. (I reviewed the catalogue here.) Aside from the huge celebration of the Portrait of Adele Bloch-Bauer I (above, from 1907) arriving after years of litigation, I found myself basking in the opportunity to see so many works by Gustav Klimt all in one place. Born July 14, 1862, Klimt may be the most difficult great artist to see in person unless you travel to Austria. Austria’s complex cultural heritage laws make it nearly impossible for his works to travel or be sold, except through the loophole of restitution to victims of the Nazis that brought “Adele” to America. The Neue Galerie’s show may have been a once in a lifetime opportunity to see so many works by Klimt in one place and only a few hours driving away. Another obstacle to seeing many of Klimt’s works is that they simply no longer exist. Klimt’s many Jewish patrons and their descendents suffered Nazi persecution, but Klimt’s works suffered at those same hands many years after the artist’s death. 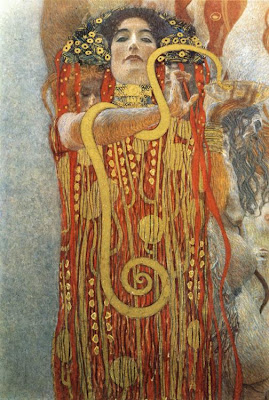 As German SS forces retreated in May 1945 before the Allied assault, they employed the “scorched earth” policy (aka, the “Nero Decree”) of Adolf Hitler. When the German soldiers set the Austrian castle known as Schoss Immendorf ablaze rather than see if fall into Allied hands, a cache of Klimt’s works perished in the flames, including the three works now known collectively as the University of Vienna Ceiling Paintings—Philosophy, Medicine, and Jurisprudence. Sadly, only a few preparatory sketches, some black and white photographs (one taken just before they were destroyed, click on the names to see the photos), and a lone color photograph of Hygeia, one of the figures in Medicine (above, from 1900-1907), remain. The University paintings stirred up one of the first great controversies of Klimt’s career. Alas, it’s hard to recreate that passion looking at ghostly black and white images and a single, tantalizingly incomplete color glimpse. I like to believe that these works still exist somewhere, spirited from the castle before the torches were lit and waiting to see the light of day again in a grand rediscovery, but even I’m not that naïve. 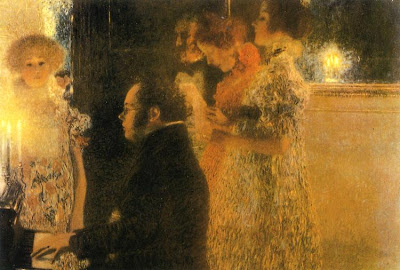 I remember buying a CD of Franz Schubert’s music years ago, admiring the cover art, and finding myself amazed that it was a painting by Klimt—his Schubert at the Piano (above, from 1899). It was unlike any of the other Klimt that I had seen up to that time. That joy of discovery soon disappeared when I read the note that the painting no longer existed, another casualty of the Schloss Immerdorf immolation. German critic Hermann Bahr called Schubert at the Piano in 1899 “the finest painting ever done by an Austrian.” Four years later, Bahr edited Against Klimt, an anthology of anti-Klimt articles essentially attacking the artist as a pornographer. How amazing would it be to see the works that caused such praise and such condemnation together today? Alas, we’ll most likely never have that chance. A single color photo of Schubert at the Piano taunts us across time, reminding us of all the works of art we’ve lost thanks to the madness of war—just another column in the great accounting of the human cost of conflict.