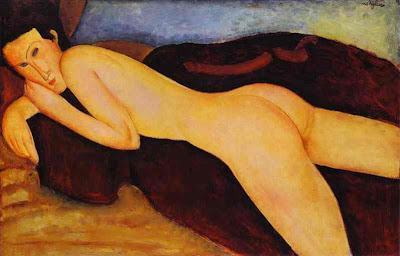 Bright star, would I were steadfast as thou art—
Not in lone splendour hung aloft the night
And watching, with eternal lids apart,
Like nature's patient, sleepless Eremite,
The moving waters at their priestlike task
Of pure ablution round earth's human shores,
Or gazing on the new soft-fallen mask
Of snow upon the mountains and the moors—
No—yet still steadfast, still unchangeable,
Pillow'd upon my fair love's ripening breast,
To feel for ever its soft fall and swell,
Awake for ever in a sweet unrest,
Still, still to hear her tender-taken breath,
And so live ever—or else swoon to death.

Like Keats, Amedeo Modigliani was a Romantic, finding an heavenly ideal in the earthly reality of the female form and longing to be “pillow’d upon [a] fair love’s ripening breast” forever, “or else swoon to death.” Today, even casual art fans can recognize Modigliani’s style thanks to the elongated necks and the almond-shaped, jewel-like, iris-less eyes he gave his subjects, as in works such as Nu couche de dos (above, from 1917). During his lifetime, however, Modigliani struggled to exist, finding little acceptance of his ground-breaking, primitivist style or for his bohemian lifestyle outside of the circle of fellow artists living in Paris. Born July 12, 1884, Modigliani the legend rose from the drama of his early death at thirty-five, spawning a small industry of plays, books, and even movies about his life. Most of these depictions accentuate the licentious aspects of his life, as if he bedded every model in Paris thanks to his dark good looks and “obvious” artistic genius. Lost in all the hoopla is the fact that Modigliani forged a unique style in the midst of the swirling tempest of “isms” of early twentieth century Europe and stuck with it despite financial peril. The neck Modigliani extended the farthest during his life was his own. 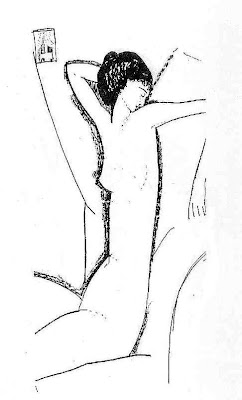 Like Picasso and so many other early moderninsts, Modigliani looked to ancient and primitive art for inspiration. Modigliani took his famous extended necks as just one of the bodily manipulations found in the wide field of primitive art. Modigliani’s nude drawing of the Russian poet Anna Akhmatova (above, from 1911) seems like a sketch of an African carved figure in its simplicity and reduction of the human form. In addition to painting, Modigliani tried his hand at sculpture, creating modern works that hark back to the sculpture of pre-history in how they simplify and exaggerate the human head and face. Even the ancient caryatid figure that held up many a Greek or Roman column receives Modigliani’s modernizing touch in paintings, drawings, and sculptures. 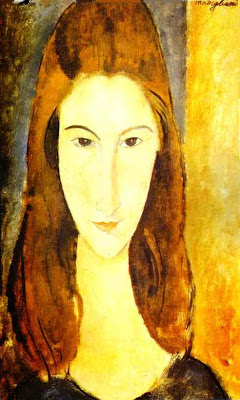 Modigliani met his match when he met the 19-year-old Jeanne Hébuterne (shown in a 1919 portrait above), who became his muse, model, mother of his child, and common law wife. Sadly, Jeanne’s conservative, Catholic family couldn’t accept the bohemian, Jewish Modigliani. When Modigliani died from tubercular meningitis exacerbated by alcoholism in 1920, his fellow artists staged a grand funeral. Jeanne, driven mad by Modigliani’s death, leapt from a window days later, killing herself and their unborn second child. Her family refused to allow Jeanne’s remains to rest with those of Modigliani until 1930. The facts of Modigliani’s life paint an undeniably sad picture, but equally undeniable is the unique vision of Modigliani, who translated the primitive other for Western culture and made the two worlds one. The bright star of Modigliani’s life, like that of Keats, proved to be a comet briefly blazing across the sky.