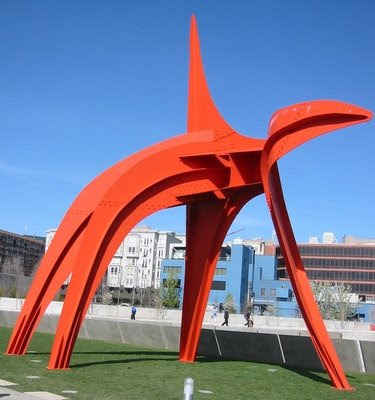 I remember standing under Alexander Calder’s gigantic stabile Eagle (above, from 1971) when the PMA installed it at the top of the “Rocky Steps” as part of the city’s push to get a Calder museum for Philadelphia as part of the “Museum Mile” dream to include the PMA, the PAFA, the Rodin Museum, and the eventually to be moved Barnes Foundation Museum. I remember looking down and seeing the optic orange paint chips scattered everywhere as evidence of just how much difficulty the installers had moving the gentle giant. Born July 22, 1898, Calder’s known better for his lighthearted mobile structures that dance in mid-air on wind currents. I never forget to look up at Calder’s Ghost high above the great staircase of the PMA. Although Calder’s stabiles seem whimsical, they’re just as monumentally crushing as the sculptures of Richard Serra, although I don’t know of anyone being hurt or killed by a Calder. Just because Calder’s works don’t seem to threaten you like Serra’s do, doesn’t make them less dangerous. For Philadelphia’s dream of a “Museum Mile,” the dream of a Calder Museum has been crushed time and again over the last 9 years. 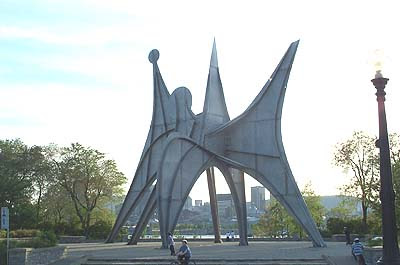 Today, where the Calder Museum might have been on the Benjamin Franklin Parkway, a small park full of smaller Calder stabiles rests like a kind of graveyard. Many of these smaller stabiles wear the funereal black of Calder’s Man (above, from 1967) rather than the happy optic orange of so many other stabiles. Calder’s family’s association with the City of Brotherly Love goes back generations—from his grandfather, Alexander Milne Calder, who came to Philadelphia from Scotland in 1868, to his father, Alexander Stirling Calder. Sculptures by the Calders appear all over Philadelphia. Between the Peales, the Wyeths, and the Calders, Philadelphia-area art has always been a family affair. Unfortunately, local government just couldn’t put together the proper package to sway the current generation of Calders to take that final step that would have made the museum a reality. 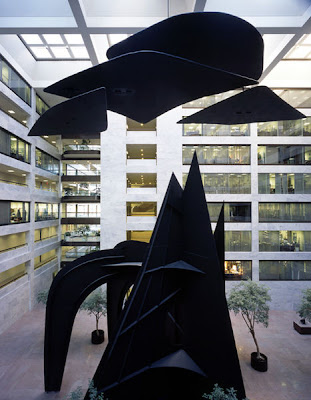 Hope lives for the Calder Museum. The very nature of Calder’s work always gives new collections a chance. Calder’s Mountains and Clouds (above, from 1976), located in the Hart Senate Office Building, actually found its home after Calder’s death. Calder suffered a fatal heart attack right after finalizing plans for the sculpture in 1976. Six years later, the sculpture, a unique blend of mobile and stabile, appeared during the building’s own unveiling. Because Calder’s art is more about ideas than execution, versions of his work can be created just as well posthumously as during his lifetime. The idea of a museum of Calder’s greatest ideas in the city his family called home for over a century may see the light of day yet.

I'm sure more could be done, but for my 40 or so years of experiencing it, Philly has always been a Calder City.
They are everywhere you look.

Thanks for this Calder insight. As a tourist, I found it difficult to see more than a few works while I was in Philly. I have stood under the Eagle at it's current spot in Seattle. I've even been to the Stegosaurus in Toledo, OH. I've actually seen a great number of his works... Calder needs a dedicated place so his whole work can be appreciated. From the delicate and playful to the strong and bold.