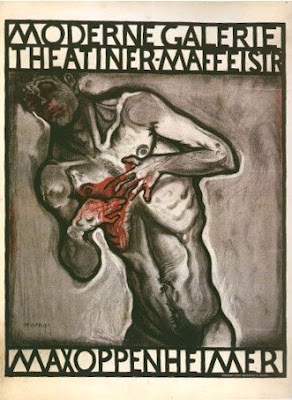 Compared with his old friends—Egon Schiele and Oskar Kokoschka–Max Oppenheimer’s name has faded from the memory of all but specialists in German Expressionism. Born July 1, 1885 in Vienna, Oppenheimer, who later called himself “Mopp,” bounced around Europe, moving from Vienna to Prague to Zurich and finally fleeing from the Nazis to the safety of America. Schiele admired Oppenheimer’s work enough to paint a portrait of the artist in his signature skeletal style. Oppenheimer returned the favor, in a way, in his gallery poster (above, from 1912) borrowing from Schiele’s tortured take on the human figure while also fleshing out the depiction with some Kokoschka touches on the side. Like many other German Expressionists, such as Emil Nolde and Ernst Ludwig Kirchner, Oppenheimer created many graphic works, such as this advertisement for a larger exhibition of his work. Oppenheimer’s work may lack originality, but it does reflect the same raw, primitive quality of the Expressionist school. 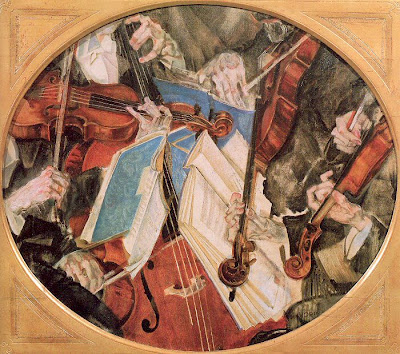 Despite showing some talent, Oppenheimer matched his geographic rootlessness with a stylistic nomadic streak. It seems as if Oppenheimer tried out every style that came his way as easily as trying on a new hat, discarding each new fashion as quickly as he put it on. Before Schiele even died, Oppenheimer had moved on to Futurism in works such as The Klinger Quartet (above, from 1916), which does make innovative work of trying to link the worlds of music and painting. Reducing the musicians to a swirling vortex of hands and instruments, Oppenheimer’s painting seems like one of Picasso’s Cubist guitars caught in a blender. But Oppenheimer arrested even this promising development when he moved to Zurich and fell in with the Dada crowd, adopting the “Mopp” moniker probably just to fit in. 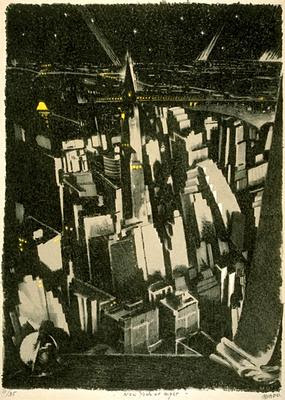 Because of his Jewish background, Oppenheimer fled from the Nazis in the early 1930s and moved to America, where he lived out his days in seclusion until 1954. In New York at Night (above, from 1951), Oppenheimer returns to his graphic arts roots but no longer in the Expressionist style. Instead, he works in a cleaner, almost Vorticist style of blacks and whites arranged in contrasting planes. After donning so many styles, Oppenheimer seems to want to leave all of them behind along with all his other unpleasant memories of Europe. Like so many European exiles of World War II, Oppenheimer idealized his adopted country, depicting a purer, cleaner, and more hopeful ideal rather than the everyday reality. In his final years, Oppenheimer allegedly tried his hand at the newfangled Abstract Expressionist style, reverting back to old form but in a whole new world.