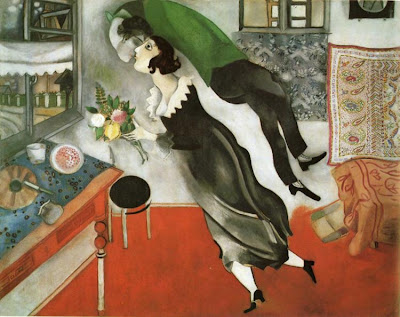 When you walk into the rear entrance of the PMA, one of the first works you see is Marc Chagall’s A Wheatfield on a Summer's Afternoon, a stage background from 1942 so big that you don’t immediately recognize it as anything more than a wall. Born July 7, 1887, Chagall painted hundreds of works that, regardless of size, seem immense in their impact, such as The Birthday (above, from 1915). Much of that impact comes from the immense sense of passionate love emanating from Chagall’s works, bursting with emotion as much as with color. "In our life there is a single color, as on an artist's palette, which provides the meaning of life and art,” Chagall once said. “It is the color of love." Love and color blinded Chagall his entire life, allowing him to turn away from the turmoil that plagued his entire life from his days in his native Russia to his life in his adopted home of France. In The Birthday, Chagall paints the buoyancy of love itself, floating on air as the lover is literally reborn in his union with his beloved. 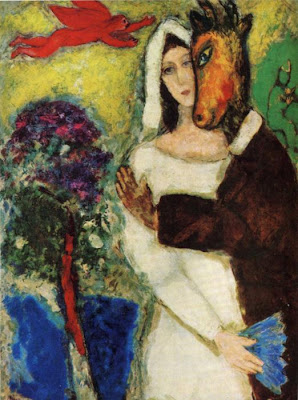 As immediately accessible as Chagall’s colors are, his symbolism can fly right over your head. Chagall’s Midsummer Night's Dream (above, from 1939) borrows the title of Shakespeare’s play of the same name, which Chagall easily identified with in his own fanciful compositions. Cows, trees, roosters, fiddlers (not necessarily on the roof), and other commonplace elements of simple peasant life take on universal implications in Chagall’s paintings, speaking of life, birth, love, fertility, and so much more. (Our next door neighbors have a small framed print of Midsummer Night’s Dream just inside their front door. The lady of the house jokes about her husband wondering why the guy’s head looks like a horse’s.) 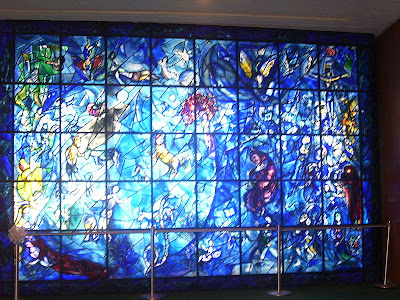 "We all know that a good person can be a bad artist,” Chagall once said. “But no one will ever be a genuine artist unless he is a great human being and thus also a good one." I’m not sure that I agree with Chagall that being a great talent always walks hand in hand with being a great person, but I can understand his faith considering his own personal gifts and boundless humanism. After the death of Dag Hammarskjöld, the second Secretary-General of the United Nations and the only posthumous Nobel Peace Prize winner, The United Nations commissioned Chagall to create a stained-glass window as a memorial (above, from 1961). Chagall’s “Peace Window” bathes passersby in a warm blue light and entertains them with a field of characters symbolizing universal communion in peace. Chagall embodies the power of positive thinking in all his work, fighting the forces of anti-Semitism and fascism with the irresistible power of love itself.
Posted by Bob at 12:01 AM