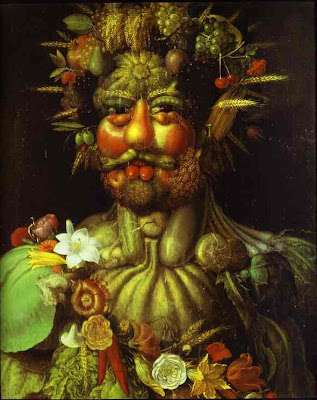 —From "Fruit Salad” by The Wiggles

One of the most wonderfully strange artists of the sixteenth century, Giuseppe Arcimboldo, died on this date in 1593. Born 1527, Arcimboldo painted many traditional works on religious subjects and portraits of the rich and powerful, most of which have disappeared over time. Works such as Vertumnus (above, from 1590-1591) continue to fascinate viewers who wonder at Arcimboldo’s ability to take common objects such as fruits, vegetables, and flowers and arrange them into a recognizable portrait. Surrealist painters such as Salvador Dalí saw Arcimboldo’s work in the twentieth century and rediscovered a kindred spirit from the past. Arcimboldo essentially took the elements of a still life and breathed new life into them, giving them human form. Coming across one of these works in an art gallery, you find yourself more and more fascinated the closer you get as more and more details emerge. 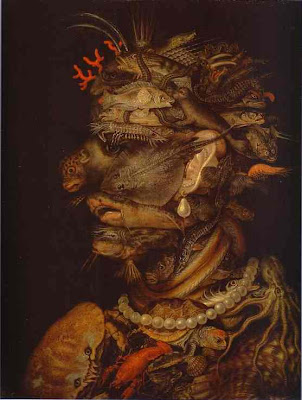 Arcimboldo painted his amazing assemblages not only as individual pieces but also often in series. He painted one series featuring the seasons of the year, creating portraits from the elements of Summer, for example. Another series focused on the basic elements, including Water (above, from 1566), in which a portrait appears out of a collection of sea life. There’s a great sense of play in Arcimboldo’s work. How could you take a face made entirely out of fish seriously? However, behind that play, some scholars see a defined system of symbolism—a Da Vinci Code of the commonplace, if you will. The elite of the Renaissance loved games and puzzles, so it’s entirely possible that behind the visual puzzle of Arcimboldo’s art hides another layer of meaning to untangle. 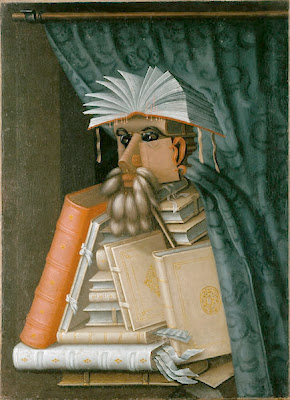 Perhaps my favorite Arcimboldo work is The Librarian (above, from 1556), a man literally made out of books—every bibliophile’s dream. Arcimboldo’s builds his The Lawyer partially out of books, too, but adds some furry finery and a face full of poultry. The Librarian, on the other hand, is 100% books, raising that occupation to a higher standard than that of the lawyer. Arcimboldo’s works are 100% entertainment, no matter how you look at them, even upside down in some cases in which he designed them to look like something no matter which way you held them. When you think of the Renaissance, the idea of art gods such as Michelangelo walking the earth gives the whole period a superhuman or almost inhuman feel. The funhouse of Arcimboldo’s oeuvre reminds us that these “gods” were people, too, who loved a joke just as much as we do now.

Fine post about Giuseppe Arcimbaldo. I first heard of him through the movie "84 Charing Cross Road," starring Anthony Hopkins, Anne Bancroft, and Judi Dench. In the film, Hopkins is the manager of an antiquarian bookstore in London. The store also carries art prints, and in one scene a customer asks if they have any prints by the Italian artist who used fruits and vegetables to create portraits, but he can't recall the artist's name. The clerk knows that it is indeed Giuseppe Arcimboldo. I then was curious had to look up this artist's work so I could see these images for myself. I, too, like "The Librarian" quite a lot.
~Dr. D

Thanks for the movie tie-in, Dr. D.

Alas, I've never seen the movie or read the book, although friends tell me it's good. Perhaps someday...