Today marks perhaps the saddest day in the entire art history calendar—the day that Vincent Van Gogh died in 1890, two days after shooting himself. If you believe the version told in the Kirk Douglas’ film Lust for Life, you think that Van Gogh finished Wheatfield With Crows (above, from 1890), walked away, and shot himself moments later. From Hollywood and beyond, Van Gogh the myth too often replaces Van Gogh the man and artist in the collective consciousness of the world. Dead at thirty-seven years of age, Vincent’s become the archetypal tortured genius rejected by the world in life but madly embraced in death. But what if Van Gogh conquered his demons? Assuming that he never fires that fateful shot, and assuming that he lived to seventy years of age, Van Gogh would have lived until 1923, long enough to see the rise of Modern Art—Picasso, Matisse, Duchamp, and countless others—as well as the horrors of World War I. As a kid, I always loved to read Marvel Comics’ What If… ?, which gave the writers and artists license to imagine familiar characters in whole new universes. If Van Gogh’s death remains one of the great hinges of art history, then it also provides one of the great “What if… ?” opportunities. 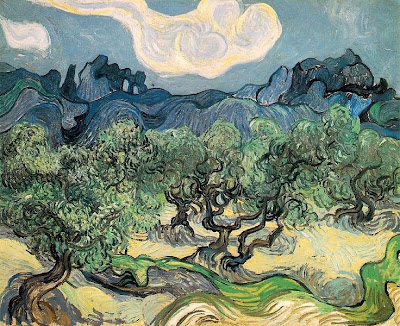 Let’s assume that Van Gogh never pulls the trigger in 1890 and gets his life together. The admiration within the painting community building for his work increases. Even Paul Gauguin gives him another chance. The posthumous exhibitions that gave Vincent his first wide exposure become displays of the work of a living, breathing, growing artist whose works such as The Olive Trees (above, from 1889) reflect only the beginning of a whole new expressive direction in his art. Sadly, Theo still dies of syphilis in January 1891, but Vincent declares that the best tribute to his brother is to realize the dream they both held for his art. The Fauves and German Expressionists look to Van Gogh as a father figure in developing their style. Instead of providing the myth of the artist, Vincent gives them the reality, providing the heart and, more importantly, the soul of the new movements of Modern art. Everyone either must follow or reject Van Gogh’s path—there is no in between. The poetry of the letters Van Gogh shared with Theo never comes before the public until after Vincent’s death, but the living poetry of his pronouncements to and encouraging words for younger artists rings even stronger in their ears. The German art community embraces their Dutch forefather, with the members of Die Brucke and Der Blaue Reiter serving as the children Vincent never had. World War I shocks Van Gogh’s sensibilities in old age, as it did everyone’s, but he survives to see artists such as Picasso and Matisse rise from the ruins to restore European art, both radically changed by the inescapable influence of a Van Gogh that continues to interact with and evolve in response to the world around him into the early 1920s. 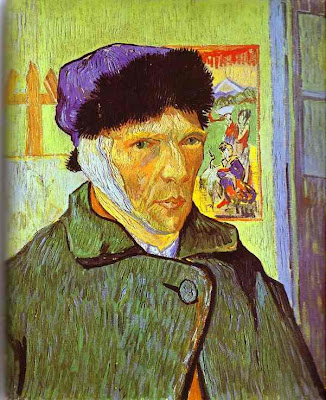 Or we can assume that Van Gogh never pulls the trigger in 1890 and never gets his life together. Theo’s death six months later rips his fragile mind apart. The deranged face looking back in the mirror in such works as Self-Portrait with Bandaged Ear (above, from 1889) haunts Vincent for the rest of his life. Increasingly erratic, Van Gogh struggles to paint. Painters, critics, and dealers earlier inclined to support Van Gogh, often thanks to Theo’s intervention, grow impatient and move on to the next thing. Without Theo’s financial support, Van Gogh lives a life of poverty, unable and/or unwilling to compromise and paint more salable paintings to support himself. The letters are never published. The German public that fell in love with the poetry of those letters never sees them. The German Expressionists still emerge, but search their own cultural heritage for a father figure to replace the Van Gogh they never get to know. The cachet that grows around the name Van Gogh in the public mind never happens. Specialists in Post-Impressionism know of Van Gogh primarily through his association with Gauguin. Eventually they may “rediscover” Van Gogh, but only decades after he dies in obscurity in the early 1920s, a fruitless branch of the great family tree of art history that withered untended. The shocking otherness of Van Gogh’s works never wears away thanks to ceaseless reproduction, which allows modern viewers to get a sense of his uniqueness but simultaneously distances them from Vincent the sensitive soul longing to be embraced by the world. Success comes too late for Van Gogh—not only for him to appreciate but also for his work to have any major impact on Modern art or popular culture.

Van Gogh is so firmly rooted in our imaginations today that it’s hard to imagine a world without him. He seems inevitable. How could you not like Van Gogh? We forget that many of his contemporaries clearly didn’t like Van Gogh’s work, or him personally. Nothing in art, or life, is inevitable. On this day when Van Gogh the man died and Van Gogh the legend was born, we should think of all the other “Van Goghs” that we’ve never heard of and most likely never will. It took a great number of coincidences for Van Gogh to become the Van Gogh we know today. Each of those accidents could have produced different results, a whole new “What if…?” we can only guess at.

You gave me shivers down my back...
I think senerio number two is a more probable what if....If he had it in him to pull his life together, I think his art would be completely different....(preceding art I mean)