When Filippo Brunelleschi developed the scientific basis for one-point linear perspective in the early fifteenth century, he opened up an entire new world of visual effects for artists to amuse and uplift audiences. National Gallery of Art in Washington, DC examines that turning point in art in a seven-part video podcast series titled Empire of the Eye: The Magic of Illusion. Hosted by Al Roker, the series uses modern day computer graphics to illustrate the complexity and genius of effects achieved over 500 years ago.

Masaccio’s Trinity (above, from 1425), believed to be the first painting to make use of Brunelleschi’s ideas on perspective, stars in the first installment after the introduction to the series. Using three-dimensional computer modeling, the podcast literally enters into Masaccio’s painting inside Santa Maria Novella, Florence, as if it were an actual room rather than a flat painting. The filmmakers then closely examined the surface of the fresco itself to show the areas where Masaccio incised marks into the fresh plaster to help guide him in depicting the perspective. You can even see the braid marks of the rope Masaccio tensed and then plucked to create straight lines in the wet plaster. Using scholars’ theories on the sequence in which Masaccio painted the Trinity fresco (broken down into 28 separate but overlapping sections of plaster, known as “giornati” or “one day’s worth”), the filmmakers step back in time and recreate how the original fresco unfolded, as if you were back in fifteenth century Florence looking over Masaccio’s shoulder. You’ll wonder at the technological genius of Masaccio, barely in his twenties when the Trinity was painted, as much as at the computer graphics that help bring it back to life today. 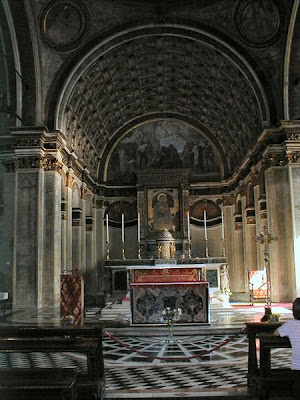 The second installment of the series examines Donato Bramante’s forced perspective apse (above, from the 1480s) in the Church of Santa Maria presso San Satiro in Milan. When the physical limitations of a road behind the church limited an expansion to only a few feet, Bramante created the illusion of an apse that stretches much further behind the altar. Looking at the apse in person, you realize that it is actually a relief sculpture that extends only a few feet. What appears to be a deep ceiling vault is really a radically foreshortened sculpture of what the vault ceiling would look like. Such trickery not only maintained the balance and symmetry of the existing church but also allowed churchgoers to experience the feeling of transcendence the church fathers intended. 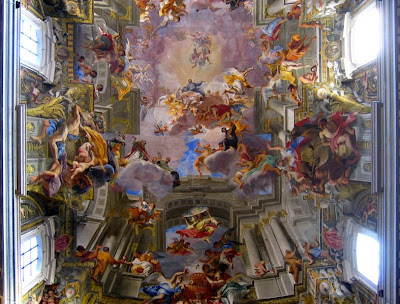 That lofty feeling gets loftier in an episode in which Baroque artists such as Andrea Pozzo blow the roof off of churches with illusionary frescoes such as the ceiling fresco for
Sant'Ignazio in Rome (above, from 1685). Pozzo carefully constructed the illusion of a ceiling three times higher than it actually was. Standing in the designated bull’s eye on the floor of the church, the filmmakers show the full impact of Pozzo’s illusion. Moving away from that sweet spot, they then show just how precise and fragile the whole effect is, where just a few steps in any direction create a vantage point in which the perspective begins to fail. (Steffi Roettgen’s Italian Frescoes: The Baroque Era, 1600-1800, reviewed here, examines Pozzo and his contemporaries in all their high-flying glory.) 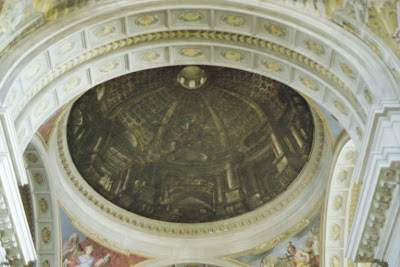 When the church officials overseeing the building of Sant'Ignazio wanted a towering dome but didn’t want one that would block the light of their library, Pozzo and his bag of tricks came to the rescue in the form of a painted dome (above) that seemingly rose high above the church floor but in actuality was a flat ceiling surface. Such amazing, yet practical, solutions make the NGA’s series a joy to watch and a true eye-opener. I can’t wait for the last three episodes and hope that Piero della Francesca, one of my favorite Renaissance artists and a true magician of perspective, gets this amazing, modern treatment of his ancient techniques. The NGA’s fresh look at the now old technique of perspective reminds us of just how groundbreaking (and wall-breaking and ceiling-breaking) these works once were.