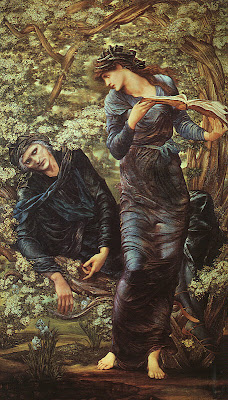 Edward Burne-Jones, one of the most beautiful and beloved artists of the Pre-Raphaelite Brotherhood, was born on this date in 1833. After reading Le Morte d’Arthur by Thomas Malory while studying at Oxford, Burne-Jones’ imagination churned out image after image of Arthurian lore, such as The Beguiling of Merlin (above). The beautiful ladies and romantic heroes of Burne-Jones paintings continue to beguile viewers today after a long, unjust neglect during the heyday of modernism. 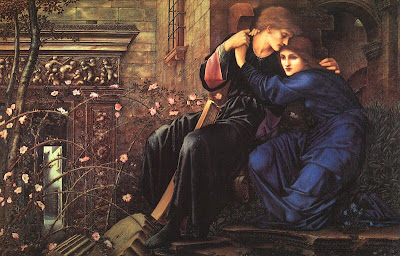 Burne-Jones studied under Dante Gabriel Rossetti and counted critic John Ruskin as one of his major influences. While at Oxford, he met William Morris, a kindred spirit with whom he joined forces later on to advance the Aesthetic Movement or Arts and Crafts Movement of late 19th century England. Although linked to the Pre-Raphaelites, Burne-Jones’ vision couldn’t be limited to any label, incorporating elements of Romanticism while looking forward to future art movements such as Symbolism and even Surrealism. Love Among the Ruins (above) revels in a dreamy romanticism with hints of the Arthurian mystique Burne-Jones loved, yet also has a quasi-religious overtone to it that points forward to Surrealism. 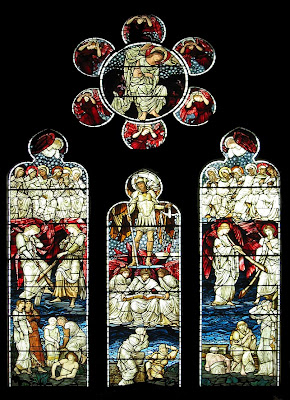 Burne-Jones’ talents expanded to media beyond painting—book illustrations, the theater, tapestries, jewelry, and even stained glass—often with the help of his friend William Morris. Created by William Morris’ company based on a design by Burne-Jones, The Last Judgment window (above) at St. Michael and St. Mary Magdalene’s Church, Easthampstead, England provides a beautiful example of how these two talents meshed together to create greatness. In contrast to the often wild lifestyles of the other Pre-Raphaelites (such as Rossetti), Burne-Jones lived a rather conventional life and enjoyed the favor of high society. After Burne-Jones’ death in 1898, the Prince of Wales requested a memorial service for him to be held at Westminster Abbey, the first time any artist had been so honored. Looking at Burne-Jones creations today they still seem fresh and vibrant, free of any associations with Victorian fussiness and repression. When I see how the excesses of the Pre-Raphaelite Brotherhood led so many artists astray, I always try to remember how those same excesses led Burne-Jones to such heights.