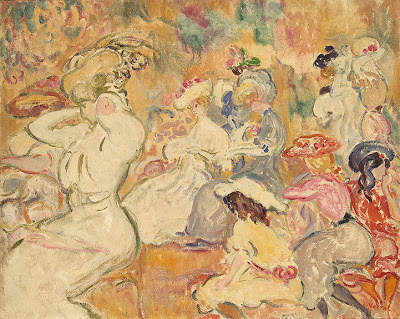 Placing artists in schools and movements always serves as a handy shorthand way of pinning them down, placing them in a neat category to easily digest them. But, sometimes, these identifications do more harm than good, reducing a unique artist to a label. Louis Valtat, born on August 8, 1869, is a perfect example of mistaken identity. Young Women in the Garden (above), from 1898, shows some of the influence of Henri de Toulouse-Lautrec, with whom Valtat worked in the theater in 1894. Valtat soaked up many different influences throughout his career—Impressionism, Pointilism, Van Gogh, the Nabis–and yet, all because of one publication in 1905 he’s been labeled a Fauve, and the label still sticks to him. 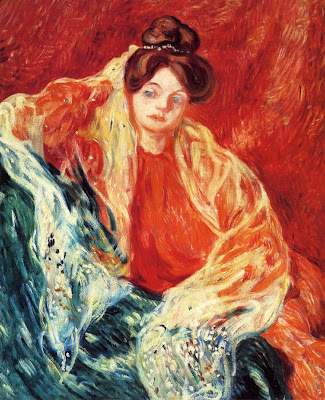 Valtat’s Portrait of Madame Valtat (above) from the fateful year of 1905 shows much of the influence of Renoir, his close friend. In fact, Renoir and Valtat painted portraits of each other as a sign of how close they were. Looking at Madame Valtat above, one can easily recognize the same drowsy, soft focus and curving brushstrokes of Renoir’s women. Yet, when the magazine L’Illustration featured the works of Fauvists Henri Matisse, Andre Derain, and others just as the term Fauve or “beast” had been pejoratively coined, Valtat’s works were unlucky enough to appear close enough in the magazine to seem a part of the same movement by pagination if not by content or style. Valtat did study with Gustave Moreau, who taught Matisse, but the association ends there. Unfortunately, once the term stuck, it stuck for good. 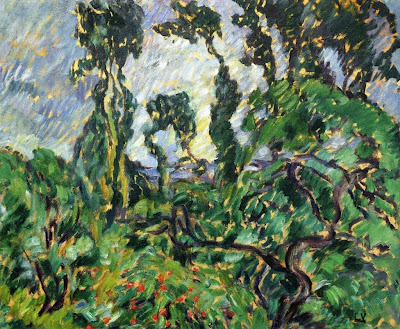 I find Valtat’s work to be a wonderful compendium of the different styles that were all percolating in Europe at the beginning of the 20th century. Trees in Normandy (above), from 1920, retains the soft focus and naturalism of the Impressionists, yet Valtat hints at a Pointillist technique, perhaps learned from his friend Paul Signac. Add in the free, almost Expressionist brushwork and you can see the influence of Van Gogh, as well. Throwing around all these terms to dissect just one painting and painter shows how limited they really are and how easily it is to overdepend on them. Louis Valtat’s paintings teach us that it is better to forget the labels if they keep you from really seeing the art.