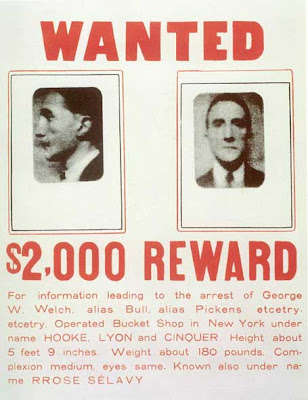 “I will not serve that in which I no longer believe, whether it call itself my home, my fatherland, or my church: and I will try to express myself in some mode of life or art as freely as I can and as wholly as I can, using as my defense the only arms I allow myself to use—silence, exile, and cunning."

Marcel Duchamp and James Joyce’s alter ego Stephen Daedalus would have gotten along famously. Both saw the modern condition not only for the artist but also all people to be one of “silence, exile, and cunning.” T.J. Demos’ The Exiles of Marcel Duchamp examines how Duchamp made use of the condition of exile to forge a new type of existence to resist the forces around him. Struggling against the erasure of individuality by both fascism and nostalgic visions of “the home,” Duchamp clings to a self-described “spirit of expatriation” in which his “refusal to be at home even while at home… became at once an antifascist ethics and an aesthetics of exile.” Duchamp becomes a man without a country, a self-declared outlaw (going so far as to create his own wanted poster, above) in a world in which any identity other than those deemed “legal” by the establishment becomes criminal. 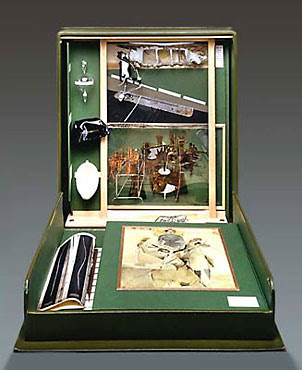 Demos centers his argument around several landmark works by Duchamp, beginning with Duchamp’s La boîte-en-valise (“box in a suitcase”), aka, the Portable Museum (above). Escaping from the Nazi occupation of Paris in May 1940 while posing as a cheese merchant, Duchamp carried his oeuvre with him in the form of small photographic reproductions of his works inside a suitcase. Viewing the early 1940s through the ideas of Theodore Adorno and other theorists, Demos sees “a horrific convergence between capitalist homogenization and the fascist extermination of difference.” Caught in this convergence, Duchamp’s Portable Museum “betrays the impossible desires for the home in a period of homelessness, and for objects when possessions have been lost.” Within the European diaspora of World War II, Duchamp and his Portable Museum resist first the fascism and nationalism roaring towards war and yet also avoid the trap of capitalism’s depersonalizing power. Demos leans heavily on a Marxist reading of capitalism here, showing his roots in the Rosalind Krauss school of art history (Demos thanks Krauss for supervising the dissertation that became this book) and that school’s theory-heavy approach. However, Demos rarely strays too far from the art itself and, more importantly, Duchamp himself. The same tense tightrope walk that Demos sees Duchamp walking between fascism and capitalism, Demos himself walks between disconnected anecdote and purely theoretical abstraction. Both funambulists stay upright, keeping their eyes straight ahead.

This tense middle ground between two undesirable extremes continues in Demos’ exploration of another Duchamp work—his Sculpture for Traveling, a series of cut up bathing caps that could be strung up, taken down, and restrung again and again. This “multicolored spider’s web,” as Duchamp called it, accompanied him on his self-imposed exile from America in 1918 as the United States involvement in World War I created “the increasingly claustrophobic atmosphere of the patriotic environment” that generated “a corrosive energy… ruin[ing] equivalence and unity, subverting self-same identity.” Fleeing the fervor for war, Duchamp sailed for Buenos Aires mulling over issues of identity in the face of engulfing nationalism. Whereas the Portable Museum created a space for art free of all restrictions of place, ideology, and nationality, the Sculpture for Traveling not only exists “in the field of dislocation, but [also] produce[s] its very experience.” The Sculpture for Traveling is the experience of traveling itself, “propos[ing] a perpetual state of flux that can only momentarily be pinned down.” Seeking that same state of fluxing freedom for himself, Duchamp refused to be pinned down by any place or concept of identity not originating from within. 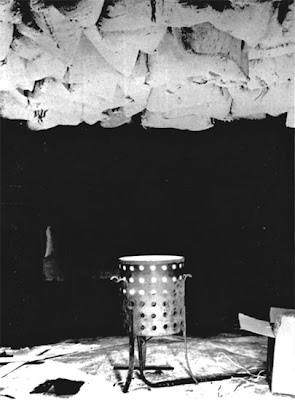 When the Surrealists staged their Exposition International du Surrealisme in 1938 in Paris, as Hitler lurked offstage, Duchamp designed an exhibit space that would exile art itself from its own privileged place. Above the heads of gallery goers, Duchamp hung 1200 used coal bags (above) as German martial music played in the background (eerily presaging the Holocaust perhaps, with the repetitive bags standing in for the numerous, faceless dead Jews). By 1938, reality had caught up with Surrealism, robbing it of its shock value in the face of the coming horrors of war. The establishment had embraced the Surrealists and stolen their shock value. Through his coal bags, Duchamp “enlarg[es] the scale of the surrealist intervention, in effect bringing its disruption to an architectural level.” By taking it to this next level, Duchamp critiques the ideology through architecture of fascism and nationalism, as had been witnessed just one year before in Paris at the 1937 International Exposition, where Germany and Russia created dueling grandiose pavilions facing one another. Demos sees Duchamp’s coal bags as not only mocking these fascist regimes but also as engaging capitalism’s “new industrial order… that both engulfed its objects and produced an alienation from them.” Again, neither side provides an acceptable alternative. 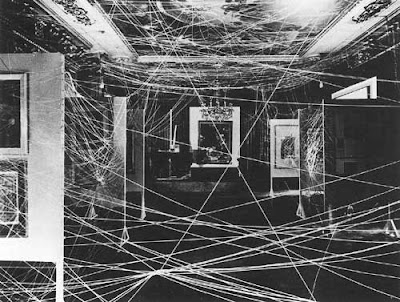 The lure of capitalism and the safe haven of America, however, tempted Duchamp and his fellow exiled Surrealists. In October 1942, the exiled Surrealists staged an exhibit titled “First Papers of Surrealism,” alluding to the “first papers” or United States citizenship applications they and all other European refugees were filing as war raged in their former homeland. Duchamp, recognizing the dangers of this new “home,” visually scribbled all over this mass application for acceptance. Taking 16 miles of twine, Duchamp created a webby labyrinth (above) entangling all of the Surrealists hopes. Instead of an oasis of peace and understanding, Duchamp transforms the gallery “into a space of conflict, one that travestied the display of artworks by visually crossing them out, prohibited the intimacy of physical access to them, and drew into an explosive proximity the irreverence of such an apparently juvenile gesture with the seriousness of the artistic aspirations of surrealism at this time.” Duchamp essentially sticks his thumb into the eye of the nostalgic viewer looking for connection and safety, refusing to allow anyone to find any sense of belonging because he himself knows that any such beliefs are untrue. By “turn[ing] exile into an object of analysis,” Duchamp “introduced a political framework to a display of art intent on escaping it, one that announced the problematization if not the impossibility of artistic practice within the context of world war.” Every time that someone was there to offer a hope, Duchamp was there to dash it, brashly refusing anyone the luxury of false hopes and gently saving us the pain of their eventual discovery.

“I can’t go on. I’ll go on,” once wrote Samuel Beckett, another modernist exile who most likely understood Duchamp’s goals well. Just as Duchamp seems most frustrating in his refusal of all alternatives, the scales fall from your eyes and you see exile itself as the only alternative. In Demos' argument, Duchamp preaches an “open ontology of being” transcending the particulars of his time, in which “the very status of human existence, forever locked into a form of exile from others and from itself,” finds relief and, perhaps, joy in a status of “escape from ultimate arrest.” For Duchamp, freedom really is just another word for nothing left to lose—home, country, career. In his vision of freedom, Duchamp offers hope to all refuges of place and of spirit. This hope proves that Duchamp truly matters, still. For all those Americans feeling exiled from within their own country, strapped into a runaway rollercoaster of unconstitutionality, torture, and militarism, Duchamp offers a way out. “Herein lies the promise of a glorious intoxication,” Demos writes of Duchamp’s final solution to exiled humanity’s ills, “which is only ever available once one acknowledges and passes through the labyrinth.”


[Many thanks to the MIT Press for providing me with a copy of this book.]