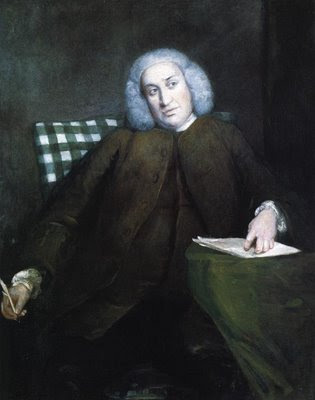 Ed Pettit of the Bibliothecary Blog reports that a portrait of Dr. Samuel Johnson by Sir Joshua Reynolds at the National Portrait Gallery in London, England was vandalized by a hammer-wielding patron on August 8th. (I had actually written on this portrait [shown above] as part of my tribute to Reynolds on July 18th.) Fortunately, they believe that they can repair the damage. Rumors that the assailant shouted “I refute it thus!” as he struck, hid the hammer in a pair of enormously large parachute pants, or hummed a medley of the Beatles’ “Maxwell’s Silver Hammer” and “U Can’t Touch This” while waiting for the police are totally untrue and fabricated here for the first time, so feel free to start spreading them around.
Posted by Bob at 6:47 AM