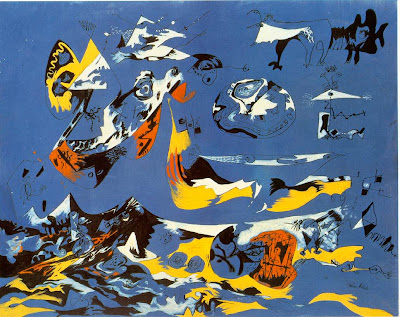 Although I try to keep this blog on topic as much as possible, please allow me a momentary digression to commemorate the 188th birthday of my favorite novelist—Herman Melville, born on this date in 1819. Melville forever holds a place in my bookworm’s heart thanks to prolonged exposure during my previous incarnation as a literature major. I’ve written my paeans to his literary greatness elsewhere, but here I’d like to discuss not only how Melville’s writings have inspired works of art but also how his writings discuss art itself. Jackson Pollock’s Blue (Moby Dick) (above) shows how the great Abstract Expressionist came to terms with the great American novel and the psychological depths it sounded. 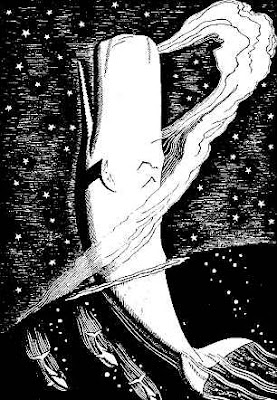 Melville’s success in finding an audience in the 1920s, long after his death, owes much to the illustrations of Rockwell Kent that accompanied early editions of Moby-Dick, or The Whale, capturing much of the transcendent (and Transcendental) spirit of the text. In Chapter 3 of Moby-Dick, Melville, through the voice of Ishmael, indulges in a little art criticism in The Spouter-Inn:

On one side hung a very large oilpainting so thoroughly besmoked, and every way defaced, that in the unequal crosslights by which you viewed it, it was only by diligent study and a series of systematic visits to it, and careful inquiry of the neighbors, that you could any way arrive at an understanding of its purpose. Such unaccountable masses of shades and shadows, that at first you almost thought some ambitious young artist, in the time of the New England hags, had endeavored to delineate chaos bewitched. But by dint of much and earnest contemplation, and oft repeated ponderings, and especially by throwing open the little window towards the back of the entry, you at last come to the conclusion that such an idea, however wild, might not be altogether unwarranted.

But what most puzzled and confounded you was a long, limber, portentous, black mass of something hovering in the centre of the picture over three blue, dim, perpendicular lines floating in a nameless yeast. A boggy, soggy, squitchy picture truly, enough to drive a nervous man distracted. Yet was there a sort of indefinite, half-attained, unimaginable sublimity about it that fairly froze you to it, till you involuntarily took an oath with yourself to find out what that marvellous painting meant. Ever and anon a bright, but, alas, deceptive idea would dart you through.--It's the Black Sea in a midnight gale.--It's the unnatural combat of the four primal elements.--It's a blasted heath.--It's a Hyperborean winter scene.--It's the breaking-up of the icebound stream of Time. But at last all these fancies yielded to that one portentous something in the picture's midst. THAT once found out, and all the rest were plain. But stop; does it not bear a faint resemblance to a gigantic fish? even the great leviathan himself?

In fact, the artist's design seemed this: a final theory of my own, partly based upon the aggregated opinions of many aged persons with whom I conversed upon the subject. The picture represents a Cape-Horner in a great hurricane; the half-foundered ship weltering there with its three dismantled masts alone visible; and an exasperated whale, purposing to spring clean over the craft, is in the enormous act of impaling himself upon the three mast-heads.

Melville wonderfully recreates the sensation of looking at and imaginatively engaging a painting, showing Ishmael struggling with it as much as he would later struggle with the great white whale. I’ve always wondered whether Melville had J.M.W. Turner in mind when he wrote of this effort to “to delineate chaos bewitched” in a “boggy, soggy, squitchy picture” that he ultimately recognizes as “indefinite, half-attained, unimaginable sublimity.” 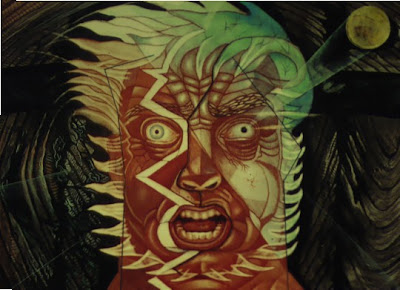 In addition to wild seascapes, Melville found portraits to be equally challenging and “indefinite.” Gilbert Wilson has painted a series of portraits of Captain Ahab. Gilbert’s “I Am Madness Maddened” appears above and his “Planets of Unwaning Woe” appears below. “I Am Madness Maddened” shows the fractured nature of Ahab’s personality as his obsession begins to consume him, whereas “Planets of Unwaning Woe” depicts the total disintegration of Ahab’s soul, which is finally cast into the cosmos like fragments of the Milky Way. 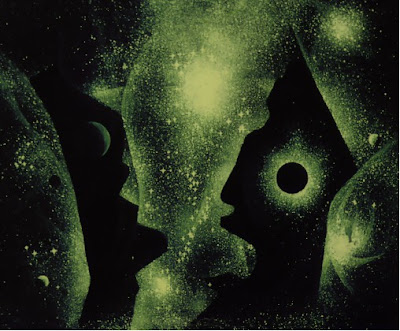 Melville’s lesser-known masterpiece, Pierre; or The Ambiguities centers on the portrait and its interpretation. Young Pierre idolizes and both doubts his late father thanks to two portraits:
a “fine military portrait” in old age full of “majestic sweetness” prominently displayed and a youthful portrait hidden “in a locked, rounded-window closet” that calls to young Pierre, “Come into solitude with me, twin-brother; come away: a secret have I; let me whisper it to thee aside.” “[S]ometimes stood Pierre before the portrait of his father,” Melville writes, “unconsciously throwing himself open to all those ineffable hints and ambiguities, and undefined half-suggestions, which now and then people the soul's atmosphere, as thickly as in a soft, steady snow-storm, the snow-flakes people the air.” When Pierre meets a young woman named Isabel, who bears a resemblance to his father, he recalls stories surrounding the youthful portrait about an illegitimate child and decides that Isabel is his half-sister. Chaos ensues as Pierre overturns all his life to protect his father’s name and pretends that Isabel is his lover and not his sister, with all the accompanying overtones of incest. Near the end of the novel, Pierre sees another portrait of a man who could be Isabel’s father and despairs at how he has placed all his faith in his reading (or misreading) of the earlier painting. The ambiguities of interpretation grow too much for him to bear and the novel ends in a Shakespearean-style bloodletting.

After Moby-Dick, Pierre remains my favorite work by Melville, partly for the wild tangents it takes and the stretching room it allows for Melville’s imagination. (Unfortunately, these tangents are the main reason behind its contemporary and, perhaps, continued reputation as a “mad” text; one review of Pierre began simply “Herman Melville Crazy!”). Melville’s writings on art tucked away in these novels deserve greater examination if for no other reason than to help us see how nineteenth-century America saw itself.