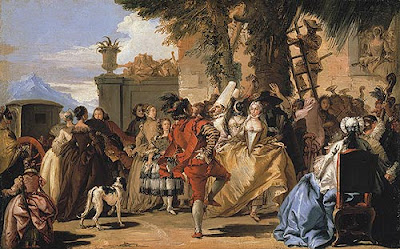 It couldn’t have been easy to be the son of Giovanni Battista Tiepolo, perhaps the last of the “Grand Manner” Baroque painters of Italy, but Giovanni Domenico Tiepolo managed to find a place for himself in art history. After studying under his father and working as his chief assistant, Giandomenico developed his own style, distinct from his father’s dreamy mannerism and closer to a true realist style. Works such as A Dance in the Country (above) from 1755 show Giandomenico’s ability to use beautiful color in depicting scenes of local color realistically and sympathetically. 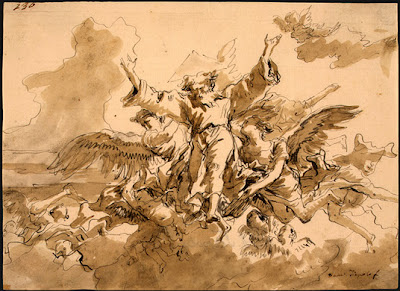 Experts can determine exactly when Giandomenico’s work strayed from the style of his father in works attributed to Gianbattista’s studio. Giandomenico took over as his father’s chief assistant at the age of 13, transferring his father’s small oil sketches into huge works on ceilings and walls of churches and palaces. Giandomenico’s sketch Creation of the Universe (above) shows his incredible draftsmanship, honed by that experience with his father, which took him all over Europe. Some of the works the father-son Tiepolo team painted in Madrid in the 1760s influenced the young Goya with their strong realism, the touch of the younger rather than the older Tiepolo. 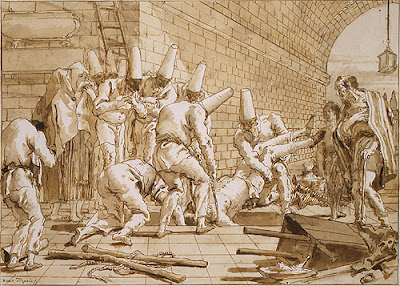 Giandomenico excelled in prints and etchings, creating several series of popular religious works. The prints I find most interesting are his Punchinello images, such as the Burial of Punchinello (above). Punchinello was the star of the early commedia dell’arte. Giandomenico took this comical figure and built up an entire world around him, interweaving comedy and tragedy. The narrative power of these works comes close to that of the works of William Hogarth for depicting the real world of an age. The Burial of Punchinello shows the clown being lowered into the tomb, much like the fallen Christ of many a church painting being deposed, which Giandomenico would have known well. By substituting the sad clown for the fallen Savior, Giandomenico makes a powerful statement regarding the humanity of Jesus as well as the glory of the ordinary human being. His father would have been proud.
Posted by Bob at 6:03 AM

Thank you for this post on Tiepolo (both of them). These artists were truly some of the greatest in history and so often are looked over by art enthusiasts.