“He’s a cover-up kind of guy in life and art,” Thomas Hoving writes of the artist Andrew Wyeth in his introduction to the recently reissued 1995 book Andrew Wyeth: Autobiography. Konecky and Konecky reissue this valuable book on Wyeth at a critical time in Wyeth’s career as he recently celebrated his 90th birthday and we begin to ponder even more seriously his legacy. Although later works such as Andrew Wyeth: Memory and Magic, the companion catalogue to the 2006 exhibit at the PMA, may be more up to date and address Wyeth more critically, this “autobiography” allows Wyeth himself to speak about his paintings openly (or as openly as he allows himself), revealing some of the emotional backdrop behind each work. People who think they “know” Andrew Wyeth and his work need to read this autobiography and know him “again” for the first time.

In passages “as told to” Hoving, Wyeth unpacks the emotional baggage behind deceptively simple works, such as Trodden Weed (above) from 1951. Wyeth had recently undergone 8 hours of surgery on his lung and nearly died. To recover, he took long walks in his beloved Chadds Ford, Pennsylvania. Wearing Revolutionary War-era boots once owned by Howard Pyle, artist and teacher of his father N.C. Wyeth, Andrew contemplated his own mortality and how to express that in a naturalistic vision. “I suddenly got the idea that we all stupidly crush things underfoot and ruin them—without thinking,” Wyeth says. “Like the weed getting crushed. That black line is not merely a compositional device—it’s the presence of death.” Armed with this knowledge, the viewer sees Trodden Weed with new eyes, ears ringing with the personal associations of Wyeth with his father and mentor and the larger associations of the natural cycle of death all around us. I recall standing in the gift shop of the PMA exhibit last year and listening to other patrons demean Wyeth’s work as just pictures of houses and fields and wishing that they knew the whole universes behind each image. For me, the addictiveness of Andrew Wyeth lies in this coded language of the imaginative life he has created. Once you break that code and speak that language, Wyeth holds you forever. 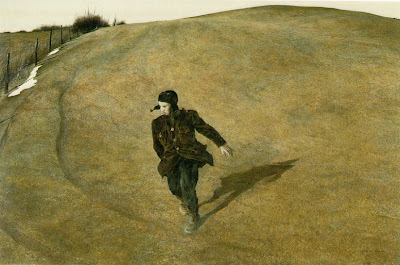 Without that insider knowledge, works such as Winter 1946 (above) seem to be of just a young man dressed to ward off the winter chill navigating a hill. To see that hill as the giant mass of N.C. Wyeth’s physical bulk and influential weight on Andrew’s career after his accidental death turns it into a wholly new image, challenging each of us to navigate our own past and the ghosts that haunt us. Memory and Magic went a long way in furthering Wyeth scholarship. Works such as Richard Meryman’s Andrew Wyeth: A Secret Life seem ultimately unsatisfying compared to Hoving’s book, which allows Wyeth to speak “unplugged” as it were, free of all critical apparatus but his own level of reticence. A friend recently loaned to me a British film done on Wyeth in the early 1980s, before the Helga Pictures circus, and I could sense the same openness and freedom of expression in those videoed talks as in the words captured here. Post-Helga, Wyeth seems to me either more media-savvy or media-phobic (or a combination of the two), unwilling to speak for his works to further the appreciation of them and content to let the critics and the paintings themselves have their say. 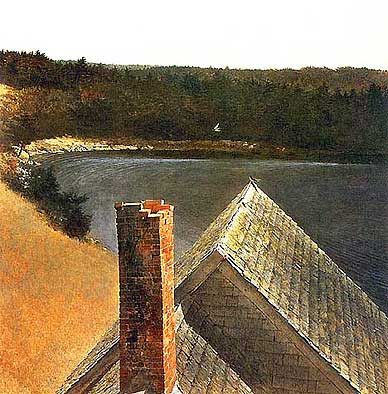 The “as told to” format seems to suit all the Wyeths wonderfully. Jamie Wyeth’s recent catalogue Dog Days, the companion catalogue to the exhibit Dog Days of Summer: Works by Jamie Wyeth at the Brandywine River Museum in Chadds Ford (my review here), used the same format to wonderful effect. It’s this oral history aspect of the Wyeth family’s art that makes this time so crucial for their legacy. Wyeth himself was there to record the end of his relationship with Christina and Alvaro Olsen in End of Olsons (above), but who will be there to record the End of Wyeths? Andrew’s wife Betsy, his greatest champion and conservator, may be stashing away this essence of the man and his work, but we may not know for sure until he is gone. Fortunately, Andrew Wyeth: Autobiography allows us to keep some part of Andrew Wyeth with us forever.

[Many thanks to Konecky and Konecky for providing me with a review copy of this book. Anyone interested in ordering from them should e-mail them at seankon@comcast.net. Beautifully illustrated and in sturdy hardback, Konecky and Konecky’s $17.95 reissue provides a much-needed, affordable re-introduction to one of America’s greatest artists of the 20th century.]
Posted by Bob at 5:47 AM