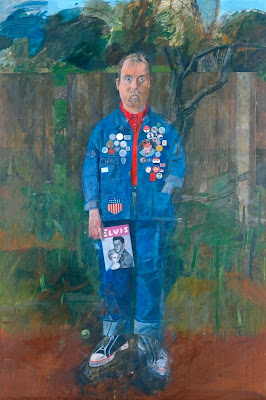 “Our aims are to paint about love, beauty, joy, sentiment and magic,” Peter Blake wrote in his Brotherhood of Ruralists manifesto of the 1970s, defending his paintings of fairies and fantasy against the opposition of “serious” art and art critics. In the companion catalogue to the exhibit Peter Blake: A Retrospective at the Tate Liverpool through September 23rd, we witness Blake creating his own island of fantasy within the waters of often-cynical postmodernism and contemporary art. Blake still wears his love of popular culture proudly and confortably, as he did in his 1961 Self-Portrait with Badges (above), offering an oasis of positive thought and free playfulness that counters the negativity of many of his contemporaries.

Breaking down Blake decade by decade, Simon Faulkner begins by asking if the 1950s Blake truly is “Painting Like a Fan?” Faulkner proposes that the apparent straightforwardness and directness of Blake’s paintings belie his “sophisticated pictorial practices” of creating “the re-presentation of a subject to create something new and separate from the original.” “Blake makes pictures of innocence and fandom,” Faulkner writes, “rather than directly embodying these things in his work.” Blake doesn’t just reproduce cultural images, he examines the human element—the nostalgia, the longing, the basic pleasure of looking—that makes cultural images so powerful. Harking back to the wrestling matches of his childhood, for example, Blake invents new villains and heroes, with names such as the nefarious Baron Adolf Kaiser, to examine the nationalistic and historical aspects of the personas and performances of that brand of theater, as well as how the audience itself contributes. Blake transforms tattooed ladies and other circus performers, cheesecake pin-ups, and glossy magazine subjects by using his unique frame of reference to present the innocent nostalgia of his vision rather than the erotic or seedier aspects of the subjects themselves. Faulker sees Blake’s framing technique as partially a response to the post-war upheaval of England and its new, modern saturation with visual imagery.

Although many label Blake as “the godfather of Pop Art,” Marco Livingston raises the question of whether Blake is truly “The First Real Pop Artist?” in his essay on Blake in the Swinging London of the 1960s. In the 1960s, Livingston argues, “Blake set out a case for an art that transcends its period and that privileges private intimate experience, even when celebrating the creativity and energy within mass culture.” As public as Blake’s images of The Beatles, The Beach Boys, and other pop music stars are, the real subject of these images is the individual creative energy those figures have tapped into. Whereas Faulkner sees Blake’s work in the 1950s being less than a straightforward appreciation of the tense, post-war 1950s, Livingston sees Blake’s 1960s work as “a straightforward and affectionate way of alluding to the beauty he found in his surroundings.” When Blake continues to paint wrestlers and moves from pin-ups to strippers, Livingston senses that he paints them in the “fullness of their humanity” and “with the greatest delicacy of touch that the artist could muster, and on a small, intimate scale that emphasizes that behind their costumes they are just human beings.” This full humanity extends to the pop stars as well, whose “spirit, personality and achievements” Blake celebrates. By 1969, as Livingston shows, Blake “had transformed himself into one of the chief chroniclers and architects of that optimistic and celebratory period, without once sacrificing the essential humanity and intense intimacy of his vision.” 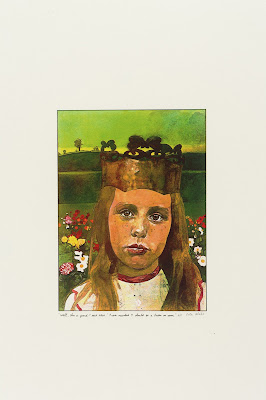 Peter Blake, 'Well, this is grand!' said Alice from Illustrations to Through the Looking-Glass, 1970; © Peter Blake 2007. All rights reserved, DACS. Screen-print on paper.

Of course, the 1960s ended with a thud for all its true believers. The funeral depicted on Blake’s famous cover for The Beatles’ Sgt. Pepper’s Lonely Hearts Club Band could double for the burial of the 1960s themselves. In 1969, disillusioned with the excesses of the 1960s and their downfall, Blake moved from London to rural England near Avon. With a group of like-minded artists, Blake founded the Brotherhood of the Ruralists in an attempt to recapture a simpler time. As Christoph Grunenberg writes in his essay, the Ruralists “grew as much out of a shared interest in figurative painting and certain forgotten or discredited traditions as out of an opposition to the ruling minimalist and conceptual practices of the avant-garde.” From this self-imposed exile, Blake and his fellow Ruralists take “a positive stand against the emptiness and conformity of so much contemporary thought and art.” Amidst this back-to-nature, dreamy aspect of Blake’s Ruralist period, fairies became real and works of literary imagination such as Lewis Carroll’s Alice’s Adventures in Wonderland and Through the Looking Glass and Shakespeare’s A Midsummer Night’s Dream provided the framework upon which he could build a new world to believe in. 'Well, this is grand!' said Alice from Illustrations to Through the Looking-Glass (above) shows how Blake was able to take these old Victorian children’s tales and repurpose them for his 1970s adult world. Grunenberg sees the fairy paintings as permitting Blake to paint an “unashamed display of exaggerated human emotions, almost completely absent in the art of the time.” Out of the ruins of the collapse of 1960s idealism, Blake found a fairyland release for all his pent-up emotions. 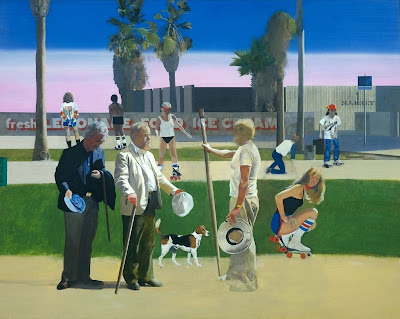 In 1979, Blake moved back to London, leaving his life in rural England behind. Late that same year, he traded in his English fantasyland for a new American one—California. Along with fellow British artists Howard Hodgkin and David Hockney (subject of Blake’s The Meeting or Have a Nice Day, Mr Hockney [above]), Blake reveled in the light and colors of Venice, California. His works turned unusually atmospheric in this new environment so different from England. Blake, however, still painted famous pop stars, transplanting his interests to American soil to paint figures such as Madonna in this new light. Rollerskaters and sunbathers become the new fairies and nymphs for Blake in his sunny paradise. 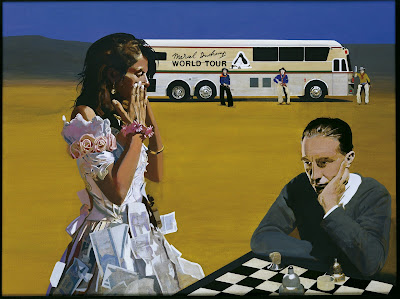 Laurence Sillars titles his essay on Blake in the 1980s and beyond, “Déjà Vu,” alluding to the title of a Blake retrospective in Tokyo in 1988 as well as the general return of Blake to his Pop Art roots, but with a difference. Although Blake worked with the pop music stars of the 1980s (most notably on the cover of the Band Aid single and posters for Live Aid, the “pop” stars populating Blake’s imagination most often in this period belong to art history. After a 1983 retrospective at the Tate, in which Blake himself worked with curators to design the show’s presentation, Blake becomes much more self-conscious of his place in art history, indulging in “conceptual play” as he borrows freely from art history in his compositions, all part of “an homage to those he admires and from whom he has learnt.” In a series of paintings titled Marcel Duchamp’s World Tour, Blake “thank[s] Duchamp for his ground-breaking gesture with a urinal [i.e., Fountain] that henceforth gave artists the freedom to define what could become art—a philosophy that has informed all branches of Blake’s practice.” (Playing Chess with Tracey, from the World Tour, appears above.) In one image from the World Tour, Blake introduces the Spice Girls and Elvis (above) to Duchamp, humorously and affectionately bringing together the two worlds of his art—pop culture and serious art history.

By the early 1990s, Sillars remarks, “Blake was to become something of a grandfather to the ‘Young British Artists,’ going out of his way to support them.” Blake also continued to design album covers for the latest generation of musicians. In one painting, titled I may not be a Ruralist anymore but I saw a fairy in my garden in Chiswick, Blake encapsulates his new post-Ruralist attitude in which he re-engages with popular culture but continues to seek out the fantastical and magical in his world. As Sillars wonderfully summates, “Cerebrating imagery rather than celebrating it, however manufactured, is what distinguishes Blake’s particular British rather than American Pop art sensibility.” Blake’s paintings come from both his head and his heart, examining each visual rather than simply reproducing it while always seeking the humanity and sense of wonder that can be missing from some Warholian-style work. Blake may not be a Ruralist anymore, but he will always “paint about love, beauty, joy, sentiment and magic.”


[Many thanks to Tate Publishing for providing me with a review copy of the catalogue to and the images from the Tate Liverpool exhibit Peter Blake: A Retrospective.]