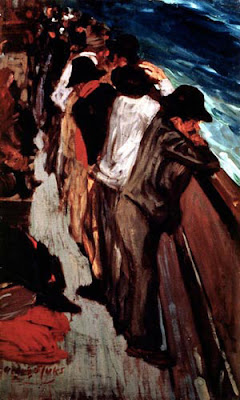 Growing up in the coalmining town of Pottstown, Pennsylvania amidst Eastern European families such as his own, George Luks clearly understood the nature of the immigrant experience in early 20th century America. Although born himself in America, on August 13, 1867, Luks’ parents clearly impressed on him the hardships of coming to America and fitting in. Luks’ father, a physician, and the rest of the family did their best to help their fellow immigrants get by. In works such as In the Steerage (above), from 1900, Luks brings to life the feeling of second-class citizenship on the passage over the Atlantic in his empathetic representation of the passengers as well as the electricity and excitement surrounding the promise of a new life in his bold colors and brushwork. 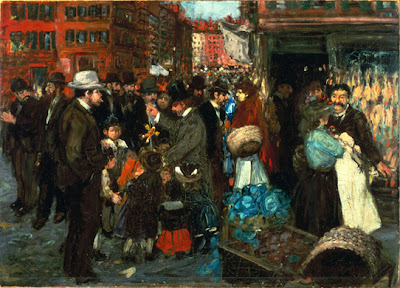 Luks began his art career as an illustrator for The Philadelphia Press in 1894, his brash and braggadocious reputation already cemented by his early dropout from the PAFA and his (false) claims of once being a middleweight boxing champion. He soon met like-minded illustrators and artists such as John Sloan, William Glackens, and Robert Henri and followed them to New York City, where they formed the school known as The Eight or The Ashcan School. Works such as 1905’s Hester Street (above), which shows a burgeoning Eastern European Jewish community forming in New York City, soon won Luks critical success and lucrative sales. 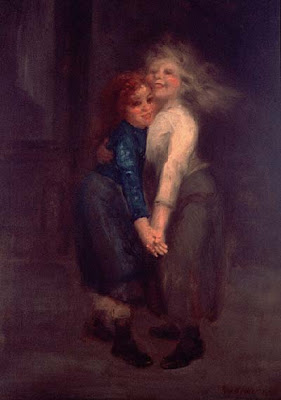 Success spoiled Geoge Luks from a social consciousness perspective. The Spielers (above), also from 1905, represents the softer side of Luks, who loved painting children, such as this dancing pair, in the spirit of Frans Hals, one of his great influences. Luks soon turned to portraits of wealthy patrons, pushing his portrayals of the masses aside. Sadly, his alcoholism grew worse, costing him his marriage. In 1933, police found Luks’ dead body slumped in a speakeasy’s doorway, the remnant of a drunken bar fight the night before. The pretend champion of the world had lost his final bout. Luks work continues to stand out for its amazing amalgamation of old master and modernist technique as well as his empathetic presentation of the “yearning masses longing to be free.”