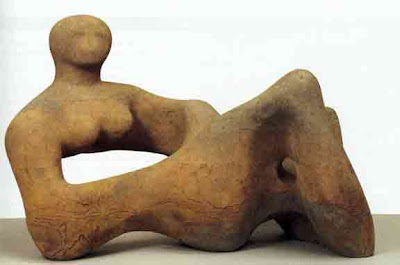 Henry Moore, one of the most successful and influential sculptors of the twentieth century, was born on July 30, 1898. Moore’s work shows the influence of the art of the primitive cultures of Africa and Central America in his approach to the figure. Recumbent Figure (above) serves as just one example of Moore’s many depictions of the nude female figure in his signature stylized way. On one hand, there’s an odd beauty to Moore’s figures, a simplifying and softening of all the hard edges of many other modern depictions of the human figure that seems almost timeless. On the other hand, some critics view Moore’s female figures, which are often simplified to the point of erasure and frequently pierced through with holes, as symbols of the violence of the male gaze—a passive-aggressive attack on the female body via sculpture. 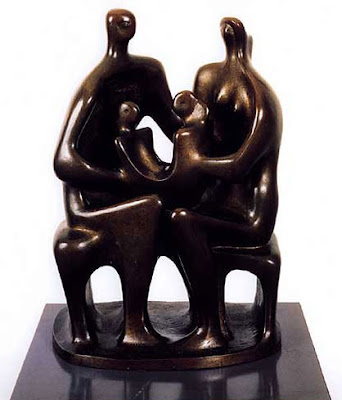 Moore made group figures such as Family Group (above) much less frequently. Again, the simplification of the figures simultaneously universalizes and erases individuality. I tend to fall in with those who see Moore’s work positively, believing that anyone can recognize these figures as a family unit regardless of culture. If Moore truly erased identity, those roles would be erased as well. If realistic portraiture can clearly transform an individual into a symbol of the universal human condition (if one accepts the possibility of such absolutes), then the opposite extreme of nonrealistic portraiture (Moore’s typology of women or families) can reach the same goal, but from a different direction. Moore claims that the story of Michelangelo inspired him at the age of eleven to become a sculpture. I’ve always believed that Moore’s admiration of Michelangelo embraced the ideals of Renaissance humanism as well.

Although Moore is deservedly best known for his sculpture, his drawings deserve some attention as well. During World War II, Moore served as an official war artist for England. When the Nazis bombed London during “the Blitz,” driving innocent citizens into the London Underground for safety, Moore followed and sketched them (above) trying to sleep in the midst of the chaos above them. Like the sculpture, these drawings remain stylized in that Moore does not concentrate on individual faces, but the realistic depiction of the Underground tunnel receding into the distance and the rhythm of the sleeping bodies trailing off into the vanishing point aptly capture the scale and the sense of community of that moment in British history. 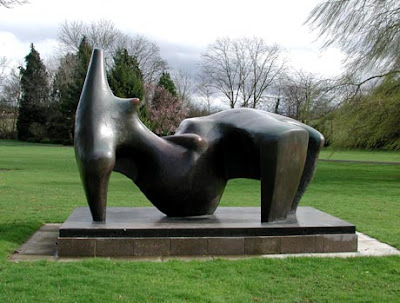 Before his death, Moore created the Henry Moore Foundation as his gift to the British nation to help further arts education. Moore’s Foundation still contributes to arts education as well as promotes the work of Moore himself. Sadly, in 2005, Moore’s Reclining Figure LH608 (above) was stolen from the grounds of the Foundation. In perhaps the most audacious art robbery of all time, thieves stole off with the two-ton sculpture, worth $5.3 million USD. Authorities now believe that the sculpture has been melted down for scrap. The “LH608” stands for the catalogue number assigned to the sculpture, necessary because Moore used the same, simple titles over and over for this sculptures. Moore’s simple titles place the responsibility of interpretation on us, the viewer, which may be the most positive, the most affirmative act any artist can perform.