The Patron Saint of Impressionism 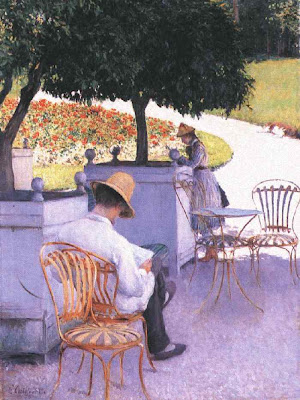 Born into a wealthy family, Gustave Caillebotte put his wealth to good use, not only becoming a painter himself but helping promote the work of other painters who counted him as a friend and benefactor, buying their works as well as helping pay the rent of artists such as Monet. Caillebotte, the “Patron Saint of Impressionism,” was born on August 19, 1848. After studying law and fighting in the Franco-Prussian War, Caillebotte stumbled into painting under the wing of Leon Bonnat. In The Orange Trees (above), he paints his brother Martial Jr. and cousin Zoe enjoying the surroundings of his family’s home in Yerres, France around 1878. 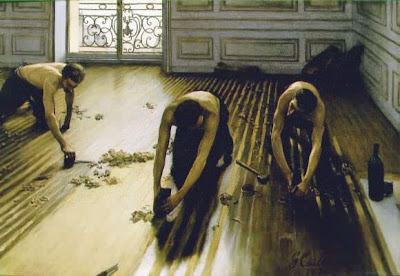 Kirk Varnedoe praised Caillebotte’s Paris Street, Rainy Day (above) as one of the finest paintings of the 19th century for its innovative perspective and use of photographic cropping. Although his career was relatively short, Caillebotte painted a few works of lasting importance. Caillebotte’s dual role in art history as painter and patron once did his artistic reputation a disservice. (Varnedoe recounts that critical struggle here.) However, there is no denying Caillebotte’s importance to the Impressionist movement. When Caillebotte died in 1894, he left in his will (executed by his close friend Renoir) 68 paintings to the French government by Monet, Degas, Renoir, Cezanne, Manet, Pissarro, and Sisley. Amazingly, the French government refused many of them. Years later, many of them ended up in the Barnes Collection. With the perspective of years, Caillebotte’s role in the history of art, including his personal contribution to the making of art itself, has finally been recognized.