Taking it to the Streets


As the modern American city was born, John Sloan, born on August 2, 1871, was there to paint it. With scenes such as Fifth Avenue, New York (above) from 1909, Sloan captured the hustle and bustle of the emerging metropolis at the turn of the century, just as America’s role as a major world power was beginning. Although born in Pennsylvania and a student at the PAFA under Robert Henri, Sloan’s reputation as a member of the Ashcan School rests on his depictions of gritty New York City and its inhabitants. 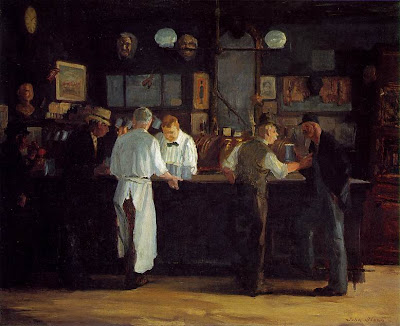 Sloan’s earliest influences were the illustrations of Honore Daumier and William Hogarth, who, respectively, captured the essence of Paris and London in their days. Sloan himself worked as an illustrator for The Philadelphia Inquirer until demand for illustration work lagged with the introduction of photography, forcing him to travel to New York City to pursue his career in art. Dark, anecdotal scenes such as McSorley’s Bar (above), painted by Sloan in 1912, reflect Sloan’s reading of writers such as Emile Zola, Guy de Maupassant, and Walt Whitman, who celebrated the existence of the common man and woman as the true subject of art. The figures in Sloan’s bar scene resemble those painted by Edward Hopper years later, but without that same sense of loneliness Hopper always injects. Despite the poor social conditions of the era Sloan painted, he never adds a satiric (ala Hogarth) or maudlin note into his painting, choosing instead to show these common people in their own simple dignity. 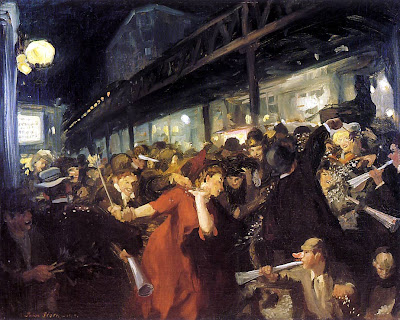 Sloan joined a Socialist group in his youth, but never became deeply involved in politics. His choice of party reflected more his antiestablishment bent rather than any fully formed political faith. In Election Night (above) from 1907, Sloan shows the excitement of the celebratory crowd under the gaslights with no mention of the candidates, placing the emphasis on the people rather than the elite in power, perhaps reflecting the end of the days of the Robber Barons of the Gilded Age and the rise of the Progressive Era of Theodore Roosevelt. In later years, Sloan taught at the Art Students League in New York City and influenced future artists such as Alexander Calder, David Smith, and Barnett Newman. That Sloan, himself trained in the 19th century, could foster such 20th century talents testifies to his openness and empathy not only as an artist but also as a teacher.