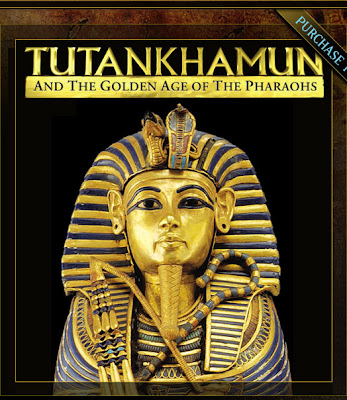 Annie, Alex, and I took advantage of a recent rainy Sunday morning to finally get down to The Franklin Institute here in Philadelphia and see Tutankhamun and the Golden Age of the Pharoahs. I’d heard mixed reviews from friends and coworkers who had already gone face to face with King Tut and his brethren, but we wanted to see and judge for ourselves before the show ended at the end of September and traveled to London. 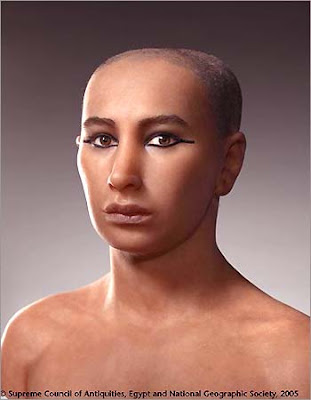 First, the good stuff. The exhibit really lays out the genealogy of Tut and his ancestors clearly and vividly. The signage is plentiful and accessible. Text placed on either side of larger displays and at the top and bottom of smaller cases always gives you a chance to read without pushing through the huddled masses yearning to get their money’s worth. As Annie remarked to me, the exhibit shows a lot of unique Egyptian pieces of blue jewelry and statuary that you don’t normally associate with the golden glamour of the pharaohs. There’s plenty of gold, too, but it was these little-known objects that really caught our attention. After you mill through the 80 or so objects pertaining to Tut’s ancestors, you enter the final five rooms of the exhibit that contain the 50 pieces from Tut’s tomb itself. The layout of the exhibit tries to recreate the experience of Howard Carter discovering the tomb back in 1923, minus the curse (I hope). After an unceremonious dumping into the requisite kitsch-filled gift shop (the tiny sarcophagus that doubled as a facial tissue dispenser was my favorite), you enter a room containing some forensic findings on Tut, kind of CSI: Valley of the Kings. Looking at the reconstruction of Tut’s face (above) on display, you get a real sense of just how young this 19-year-old king was when death and immortality came calling. 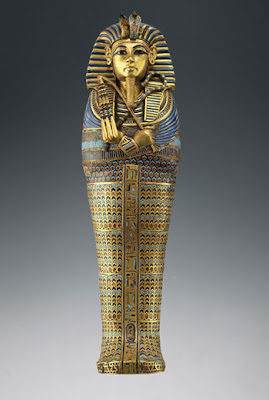 Now, the bad stuff. The ticket price seemed disproportionate to the number and scale of items displayed. Those 130 items sound like a lot until you see how small they are. The rooms seem to be darkened not just to create atmosphere but also to generate a false intimacy to save the tiny treasures from being swallowed up by the empty space around them. I just shook my head at the people buying audio tours at an additional cost. (Any exhibit over $30 USD should include audio tours as a matter of course, in my opinion.) What may have been the most disappointing aspect was the sheer lack of scale. I realize that large statues and sarcophagi are difficult to move, but part of the allure of the pharaohs is the Cecil B. DeMille epic flavor Americans have come to expect from television and film. Everything seemed more super-small than super-sized. Which leads me to the most irksome aspect of the whole exhibit—the advertising. The face in the advertisement at the top of this post has been plastered all over Philadelphia for months, even wrapped around the sides of buses. Most people think that it’s the famous golden funeral mask that served as the centerpiece of the exhibit that toured the United States in the late 1970s (and inspired Steve Martin to sing “King Tut”). In reality, it’s from a tiny sarcophagus (above) that housed the liver of the deceased. I knew this going into the exhibit, but standing there looking at the tiny Tut just encapsulated the whole underwhelming experience for me. If you’re a fan of ancient Egypt (and even the ancient Greeks and Romans marveled at this culture that was ancient even to them), it’s certainly worth a look, but be prepared to be disappointed on some level, however small.