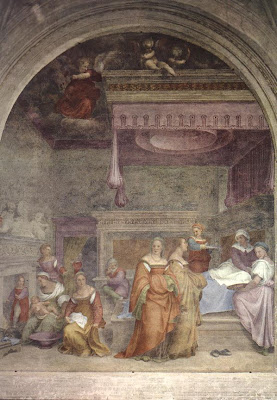 Ah, but a man's reach should exceed his grasp,
Or what's a heaven for? All is silver-grey,
Placid and perfect with my art: the worse!
I know both what I want and what might gain,
And yet how profitless to know, to sigh
"Had I been two, another and myself,
"Our head would have o'erlooked the world!" No doubt.


Andrea del Sarto, known as the painter “senza error” or the “faultless painter,” was born on July 16, 1486. Immortalized by Robert Browning’s dramatic monologue spoken in Andrea’s “voice,” del Sarto has become the poster child for the artist of great talent but scant ambition. del Sarto’s Birth of the Virgin (above), a fresco at the church of SS. Annunziata in Florence, Italy, shows the great promise of his talent. Dwarfed today by his contemporaries Michelangelo, Raphael, and da Vinci, Andrea nonetheless produced some of the finest Mannerist works of the High Renaissance in terms of technique if not power to enthrall. Sadly, to paraphrase Browning, del Sarto’s reach rarely exceeded his grasp, and he was more than content to have it that way. 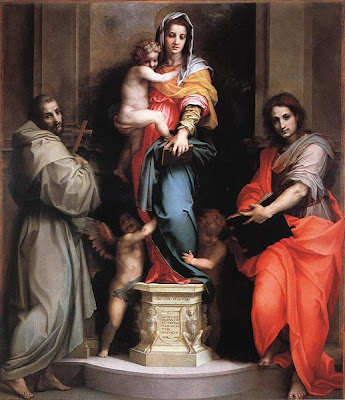 In Madonna of the Harpies (above), del Sarto displays the sculptural approach he brought to his figures. In color and design, he clearly parallels Michelangelo and da Vinci, his more famous brethren. Unfortunately, del Sarto always plays the role of the boy among men, always coming up short in comparison, although Michelangelo himself praised Andrea’s work. Sadly, del Sarto invites direct comparison because of the similar themes of his work—his Last Supper might inspire, if you didn’t know of da Vinci’s version. 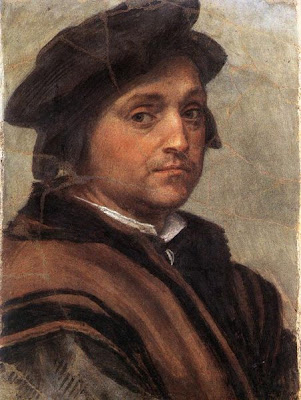 The sad eyes of Andrea’s self portrait above from after 1525 speak of his life of woes after his unfortunate marriage to Lucrezia, the silent villainess of both Browning’s poem and Giorgio Vasari’s account of del Sarto’s life in his Lives of the Most Excellent Painters, Sculptors, and Architects. Vasari, a student of del Sarto’s who was recommended to Andrea by Michelangelo, had little love for Lucrezia:

[F]alling in love with a young woman who was left a widow, he took her for his wife, and had enough to do all the rest of his life, and had to work harder than he had ever done before, for besides the duties and liabilities which belong to such a union, he took upon him many more troubles, being constantly vexed with jealousy and one thing and another. And all who knew his case felt compassion for him, and blamed the simplicity which had reduced him to such a condition. He had been much sought after by his friends before, but now he was avoided. For though his pupils stayed with him, hoping to learn something from him, there was not one, great or small, who did not suffer by her evil words or blows during the time he was there.

When King Francois I of France invited del Sarto to paint for him in 1518, it seemed to be his lucky break. Unfortunately, Lucrezia soon grew jealous and demanded that Andrea return to Florence. King Francois I gave Andrea a huge sum to be spent on artwork for his court. Prompted by Lucrezia, del Sarto unwisely spent the money on an extravagant new home for them in Florence. Fortunately for Andrea, the king didn’t prosecute him, but he did sever all ties with the artist. Andrea del Sarto stands as a great example of what could have been, perhaps the biggest “What If..” of the Renaissance.

[This belated birthday to Andrea Del Sarto is brought to you courtesy of the technical difficulties I experienced a while back.]
Posted by Bob at 6:03 AM

I saw the Schama series over here earlier in the year. I wasn't mad on the caravaggio or david- too much re-enactment- but I think Schama hit the mark with the Rembrandt episode. That's what I voted for anyway.

have kept up with your earlier posts on Poussin. Don't forget that there is a Poussin show at the Met in NY next Feb (after Bilbao).

Schama's series just finished here in the U.S. this past week. As much as I loved each segment in its own way, I think the Rembrandt was the best, too. Schama's Rembrandt's Eyes still sticks with me, so that's probably the deciding factor.

I'll keep an eye out for the Poussin exhibit. If I time it right, I can see Poussin and Courbet at the Met at the same time. Then I have to go back later in 2008 to catch the Turner. Just an amazing year for the Met in 2008.