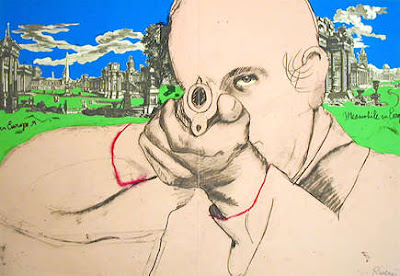 Always ready to take aim at American society and art history in general, Larry Rivers, born on August 17, 1923, brought a Pop Art irreverence to the New York School of the 1950s and addressed social issues in a way that Abstract Expressionist friends such as Jackson Pollock refused to. After receiving a commission to paint murals based on The Boston Massacre, Rivers expanded that theme, taking the memory of the death of Crispus Attucks and expanding it to the issues of race in America during the Civil Rights Movement, linking the country’s revolutionary past to the new racial revolution of the late 20th century. [Ready Aim (?) from Rivers’ The Boston Massacre series of prints appears above.] Artist, filmmaker, actor, and even proficient Jazz saxophonist (and friend of Jazz legend Miles Davis), Rivers’ overflowing talents and imagination allowed him to riff off of history, art and otherwise, and create new ways of seeing our world. 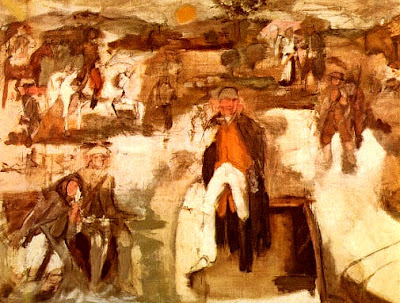 In 1953’s Washington Crossing the Delaware (above), Rivers takes on the American cult of personality surrounding George Washington as well as the icon of art history of the same title painted by Emanuel Leutze. Frank O’Hara, Rivers’ friend and collaborator, wrote a poem “On Seeing Larry Rivers’ ‘Washington Crossing the Delaware’ at the Museum of Modern Art” capturing some of his feelings of seeing the Father of His Country removed from his grandiose pose in the boat and placed on the banks of the Delaware River, standing as human and vulnerable as all of us. Rivers’ expansive talents and subject matter led to collaborations with other authors as well, such as Allen Ginsberg, Kenneth Koch, and Terry Southern. In many ways, Rivers straddles the worlds of the New York School as well as that of the Beats, taking the best of both spheres and incorporating them into his own vision. 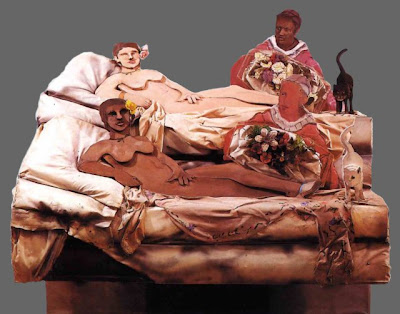 I love Larry Rivers mostly for his sense of humor, not only for its silly take on art history but also for the underlying message. In I Like Olympia Black (above), his sculpture from 1970, Rivers takes Edouard Manet’s Olympia and creates a racial “negative,” reversing the roles of the white model and black maid, making us see the social constructions of race anew through what at first glance is not a racially charged work. Rivers charges all of art history with his hipster energy and irreverence, poking the Old Masters in the eye and making all of us see new things in works that had grown too stale and familiar.